Inside the mirage of good climate info at the SEC 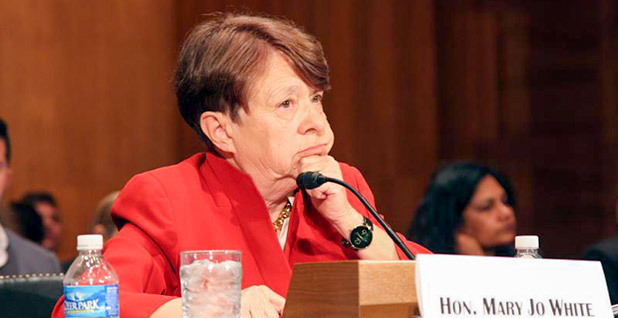 Corporate America has a split personality when it comes to climate change.

When issuing marketing materials and press releases, U.S. companies frequently warn that rising global temperatures could cost them money. They tout specific green projects, like solar roofs and increased efficiency. But when it comes time to report to the Securities and Exchange Commission, the same companies stick to broad terminology and sanded-down statements.

Take Target Corp., which outlined some of its efforts to become more climate-friendly in its 2015 sustainability report: solar panels, smart-grid technology, low-power stores, recycling programs and a recent pledge made at the White House to cut greenhouse gas emissions.

Or IBM, which issued a detailed climate report last year, too, telling a nonprofit that energy efficiency standards for computer products present a "high" financial cost that would be "virtually certain" to affect the tech giant within a year.

Even though information for both companies is publicly available — and could sway someone from buying or selling Target or IBM stock — none of it is on file at the SEC. And the imbalance is widespread.

A ClimateWire examination of corporate documents, congressional audits and independent reports, along with interviews with investors, former SEC employees and congressional staffers, shows a disparity in what companies say about climate change and where they say it.

In fact, analysts say, for investors interested in managing the economic risks of climate change, the SEC is among the least helpful places to look.

"Often companies will put information out in news releases or sustainability reports," said Warren Lavey, a law and environmental sciences professor at the University of Illinois, "and yet that information doesn’t find its way into the SEC filings."

Disclosure through other means

U.S. law requires public companies to tell shareholders of substantial events that relate to their business, such as lawsuits, financial performance and overall business trends.

Those data culminate in annual reports, known as 10-Ks, which are snapshots of U.S. companies’ performance. They are documents that Wall Street analysts, investors and consultants rely on to evaluate the world economy.

Yet as governments, businesses and individuals worldwide try to grapple the risks of climate change, the SEC, whose mission is to protect investors and maintain fair financial markets, has done little to extract information about climate change from the companies it oversees.

That has prompted critics to argue that shareholders are not getting a full picture of their holdings — and to question if the agency fully understands the economic threats of global warming.

The SEC is aware of the information gulf. The commission announced in April that it was considering changing a key rule that governs environmental disclosure, Regulation S-K, saying it knew some investors were unhappy with the "incomplete and inconsistent" landscape of climate disclosure.

"Investors are flying blind and the SEC is not doing their job," said Jean Rogers, the CEO of the Sustainability Accounting Standards Board, a nonprofit working to establish widespread accounting rules that quantify environmental risks.

Rogers said many investors aren’t exposed to useful climate disclosure in 10-Ks. "The ones who are really doing their due diligence are working very hard to get it other ways," she said.

One of those ways — CDP, formerly known as the Carbon Disclosure Project — has been available for years.

The London-based nonprofit, founded in 2003, surveys the private sector on climate, forestry, water and other sustainability topics. Its advisers credit the group with inventing environmental disclosure.

Paula DiPerna, an adviser at CDP, said the SEC’s move to consider extracting more information on climate change comes as climate science is "piling up," and as the firms it oversees are already sharing a wealth of information with other sources.

Companies that make up 70 percent of publicly traded stocks worldwide are already disclosing climate information through CDP, she said.

"So you have to be an ostrich to still have your head in the sand about climate change," DiPerna added. "And the SEC is waking up to that."

Yet a number of business groups, including the U.S. Chamber of Commerce, the American Petroleum Institute and the National Association of Manufacturers (NAM), oppose the SEC’s steps to tighten its climate disclosure rules.

"The disclosures that public companies, public manufacturing companies, must file are already really lengthy and burdensome and overwhelm not only the issuers … but also their shareholders," said NAM Director of Tax Policy Christina Crooks.

Climate disclosure is a thorny subject at the SEC.

In 2010, the commission issued voluntary guidelines encouraging companies to report serious climate risks that could harm their profits. Those perils include international climate accords, domestic regulation, physical damages and market trends. The rules passed on a 3-2 party-line vote.

"We are not opining on whether the world’s climate is changing, at what pace it might be changing, or due to what causes," said Mary Schapiro, an Obama appointee and then-SEC chairwoman, who voted to pass the guidelines.

Kathleen Casey, a Republican commissioner nominated by President George W. Bush, said the policy was politically motivated and beyond the SEC’s "fundamental mission."

Investors convinced that rising seas and extreme weather threatened their returns at first welcomed the 2010 action. The agency was also initially diligent about enforcing the guidelines, writing so-called "comment letters" to companies to get them to explain in greater detail how climate change affected their operations.

SEC officials wrote 38 comment letters on climate change in 2010, followed by 11 in 2011 and three in 2012, according to a 2014 report by Ceres, the sustainable finance advocacy group. The SEC wrote zero comment letters in 2013.

Bevis Longstreth, a Democratic former SEC commissioner who was appointed under President Reagan, blasted that outcome.

"It has been widely ignored by issuers and the commission alike," he said of the 2010 document, "reducing what should be mandatory disclosure concerning material effects of climate change" to voluntary statements "that fail to usefully inform investors."

Even when the agency was enforcing disclosure, the responses of U.S. companies were often vague compared to those of their international counterparts. Both file SEC documents, but foreign companies generally provide more information.

Molson Coors Brewing Co., headquartered in Denver, for example, devotes a paragraph to climate change in its annual report.

Its competitor, Diageo PLC, a U.K. company that brews Guinness, provides a rich description of plans to save water and protect its profits. It also talks about the Paris climate agreement and its goals to cut carbon, and pinpoints 39 of its locations in water-scarce regions.

"Water scarcity is particularly important to us because water is our main ingredient," Diageo said in its latest annual report.

Molson Coors’ entry is more nebulous. It doesn’t provide specific steps to avoid what it says is a risk: "Climate change and water availability may negatively affect our business and financial results," it says in its latest 10-K.

"If Diageo can do that — and we’re talking about water here in the food and beverage industry — an investor deserves comparable information on how Molson Coors is managing their water risk," Rogers said.

Part of the challenge in getting companies to talk openly at the SEC is that climate change data can be subjective. And businesses are often unsure about how climate regulations might affect them.

Nonetheless, Lukomnik said, the SEC is lagging behind other regulators. Stock markets in Brazil and South Africa require firms to publish climate data in order to trade on their exchanges, he said.

"I think you have to look at the SEC in context," he said, "the context being the rest of the world is moving toward disclosure of environmental factors."