Inside the ‘proving ground’ for a clean energy grid 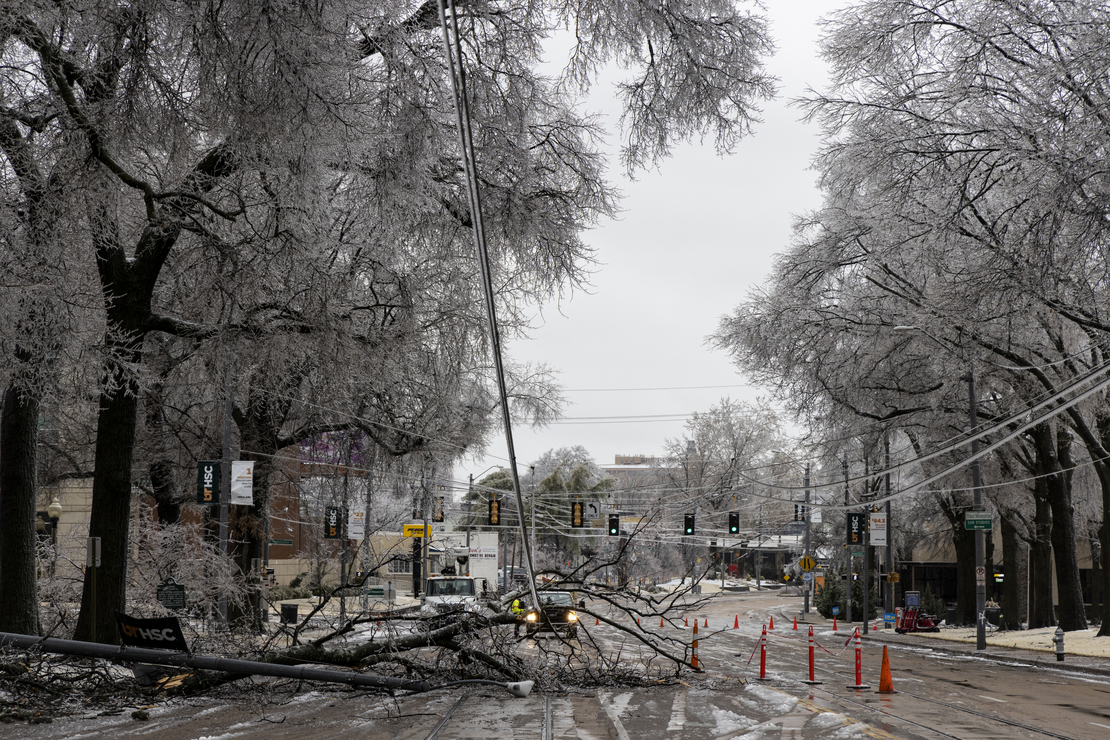 LENOX, MASS. — Loud as a gunshot, the ceramic transmission pole insulator shattered, becoming the latest equipment to meet its end at a 35-acre test site in the Berkshire Hills.

The dinner-plate-sized insulator was similar to the millions that connect power lines to poles and towers across the United States. It perished during a reporter’s recent visit to the Lenox Transmission & Distribution Laboratory, in a small torture chamber where a technician hooked it up to 52,000 volts of current and then pulled it apart mechanically to measure when and where it would fail.

The facility — run by the Electric Power Research Institute (EPRI) — tests weaknesses and breaking points of poles, wires, cables, towers and other equipment that make up the nation’s power transmission and distribution system.

Answers to such tests will help utilities calculate how harsher weather may shorten the lives of critical components, a vital mission for the industry as U.S. power grids face ever-fiercer assaults from extreme weather, said Andrew Phillips, EPRI vice president of transmission and distribution infrastructure, as he recently led a reporter around the laboratory grounds.

The testing is also essential as the U.S. electric power industry accelerates into a historic shift to cleaner energy, Phillips added.

The growth of wind and solar power, which is tied to shifting weather and the sun’s movement, make grid operations harder to control. Electric vehicles and “smart” buildings create new operating complexity. Poles, towers, insulators, relays, switches and sensors are being redesigned to solve much more complex operating challenges, at much faster speeds.

A stream of innovation is coming from labs to address these challenges, but such new technologies call for unbiased, third-party verification — especially in the precisely synchronized power operations where grid disturbances can escalate into blackouts, Phillips said.

Transmission capacity also may have to double or triple by 2050 to reach the Biden administration’s clean energy goals, according to the National Renewable Energy Laboratory. That will require new technologies and materials to help lines carry more power at lower cost, all while being resilient in a changing climate.

The transformation of the grid comes with “more and more” to worry about, Phillips said.

“Before, we were just worried about reliability,” he said. “Now we’ve got to worry about resiliency too. That is a totally new thing.”

Phillips believes the answer is testing, with EPRI serving as a “proving ground” for new technology.

“If we have to put out a whole bunch of new relays and protection systems, you don’t know what you don’t know. It is almost impossible to build something the first time and get it perfect,” Phillips said. “There will be things that happen because it’s new. You can’t predict everything.”

On the E&E News visit this summer, engineers were testing a utility pole that had been artificially “aged” in a special chamber that accelerates the effects of weather. They anchored the pole’s base to the earth while bending it farther and farther like an archer’s bow to see how much wind force it could withstand.

Elsewhere in the facility, engineers were stretching a section of underground electric cable to seek its limits and pummeling line insulators made of new composite materials with ultraviolet light and drenching them with salt water.

Technicians at Lenox have also checked out transmission towers with smaller profiles and explored solutions for reducing the hum of high voltage lines, with the aim of making their presence more palatable to the public.

The lab’s experts also used a test substation to insert “swimming” robots inside transformers to gather data on the wear and tear of the windings and insulations. Phillips said that in the hands of experienced inspectors, the robots are effective in finding defects within the multimillion-dollar grid components.

Part of the lab’s mission is to help overcome a shortage of skilled workers that could hamper the massive transmission expansion policymakers seek. The lab, for example, has tested “crawling” robots designed to maneuver around a substation’s grounds and read equipment gauges, replacing people.

During the tour, Phillips showed the way to a test area where engineers were preparing a drone to fly over a section of high voltage lines. The exercise would verify the drone’s ability to inspect and report on the conditions of the lines, towers and connectors.

Drones — more formally known as unmanned aircraft systems, or UAS — have gained acceptance for their ability to identify worn transmission towers that can fail in severe wind and weather and to surveil transmission rights-of-way for dead trees that could fall into lines, cause short circuits and start fires.

The lab has tested a variety of drones that expand on that use. One tested this year, for example, automatically flies a software-directed inspection route along a high voltage line in an attempt to eliminate the human error that could steer the drone into such lines.

A key question is how drones behave in the intense electrical and magnetic fields around high voltage lines. Phillips said the lab has found that some are “catastrophic failures,” while others seem to be unaffected.

EPRI has also tested 10 types of drones built to patrol power lines and intercept incoming hostile drones that may be launched by vandals or terrorists. Each has had “pros and cons,” Phillips said.

In all, EPRI says it conducts about $60 million in grid transmission and distribution research annually at Lenox and two other locations, funded by U.S and international energy sector clients. Led by senior grid executives, the nonprofit is the industry’s most important source of pilot testing new, pre-commercial technologies and components and operational best practices, according to a 2019 report by Bill Gates’ Breakthrough Energy.

“They do very good work. I think they’re well regarded,” said Philip Jones, a former Washington state regulator who has chaired the National Association of Regulatory Utility Commissioners. Jones is a member of EPRI’s committee of advisers from outside the grid industry.

The Lenox lab, which employs about a half-dozen full-time technicians, is named for a nearby town more famous as the site of the summertime Tanglewood Music Festival. More than 30 project managers and engineers travel to the lab frequently to work on projects, according to EPRI.

When EPRI was founded by utility sector leaders in 1972, its research budget was funded by a general assessment on U.S. power companies, said Michael Dworkin, a former EPRI board member and founder of the Institute for Energy and the Environment at Vermont Law School.

That changed around three decades ago with EPRI’s decision to put the cost of research on the utilities, government agencies or other clients that request it and are willing to pay. That way, a company with no nuclear reactors wasn’t paying for reactor research, for example. About 90 percent of U.S. utilities fund research at the nonprofit, according to the Breakthrough Energy report.

That consumer-directed agenda has come under some criticism, including in a letter in the current issue of the journal Environmental Research Letters. It concludes that in the past 20 years, EPRI research reports and journal articles have focused far more on decarbonizing coal and gas generation than acknowledging the climate threat.

EPRI’s support has helped extend the lives of coal power plants that should be closed, said Leah Stokes, one of the letter’s authors and an associate professor of environmental politics at the University of California, Santa Barbara.

“That locked in enormous capacity that could have been replaced by wind,” she said in an interview.

In response to questions from E&E News after the visit, Phillips said, “Our findings are based in science.”

“We bring together our scientists and engineers, as well as experts from government, universities, national labs, environmental groups and many others around the world, to help address sector challenges to keep electricity clean, affordable and reliable,” said the EPRI vice president. An advisory committee weighs in on the organization’s priorities, he said, but “EPRI reserves the right to conduct and direct the research.”

In an interview with E&E News this summer, Mansoor said the organization is focused on achieving a zero-carbon power grid. Doing it “the right way” means “don’t make electricity too expensive by trying to get too fast, too deep,” Mansoor said.

Dworkin, a former board member of Vermont Electric Power Co. and the EPRI board of directors, said the agenda is inevitably influenced to some extent by where the money comes from. There are only a half-dozen public sector representatives on EPRI’s 36-member policymaking board, he noted.

“If it were half, you’d have a structure for a wider degree of concerns and issues,” he said.

While EPRI is used by many utilities to test new technology, its evaluations don’t necessarily clear the way for innovations.

Unlike other major U.S. industries, led by a few giant corporations, the nation’s power sector began in Thomas Edison’s time with separate utilities springing up in cities. Today, there are nearly 3,000 U.S. utilities of various kinds.

In an industry where even small operating mishaps can escalate to crises, there is an ingrained reluctance to accept third-party assurances of an essential new component or software control, Phillips said. Utilities’ engineers want to prove to themselves that new things work. A conservative stance toward dramatically different technologies has slowed the adoption of artificial intelligence (AI) in grid operating software systems, experts say (Energywire, August 23, 2021).

At an EPRI conference in May 2021, Massachusetts Institute of Technology professor Koroush Shirvan called trustworthiness of artificial intelligence “a huge issue.” Michael Bates, Intel Corp.’s global manager of energy, also spoke of some utilities’ discomfort with AI-enabled grid innovations in an interview earlier this year.

“There are some that are coming kicking and screaming,” Bates said. “The most interesting ones are those that see opportunities.”

Trust in change is a hard-wired requirement for the industry, Phillips says.

“The power system is 99.99 percent reliable. That’s what people expect,” he said. “Utilities need to have that confidence. They won’t just accept a new technology.”