Inside the quest to verify countries’ CO2 cuts 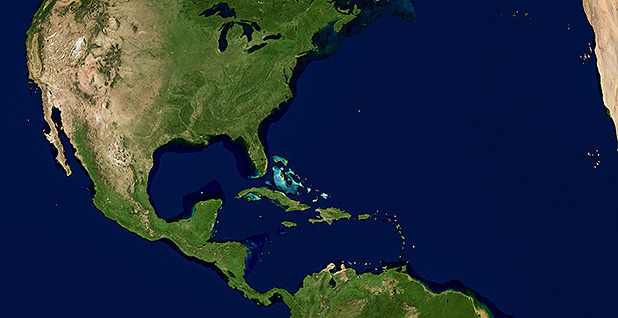 From an orbit 22,000 miles above the Americas, the Geostationary Carbon Cycle Observatory will monitor plant health and vegetation stress and probe the natural sources, sinks and exchange processes of key greenhouse gases. Photo courtesy of NASA.

Nearly 200 nations pledged to reduce their greenhouse gas emissions under the Paris Agreement on climate change. But how will we know if some don’t follow through?

The current inability to verify that a nation has made its promised carbon cuts remains a long-standing loophole that experts say must be closed to make the global pact effective.

The National Research Council, representing some of the top scientists in the United States, framed the problem in a 2010 report. It noted that each nation’s basic estimate of its emissions comes from "self-reported national statistics," many derived from statistical estimates of energy production and consumption.

In an introduction to the study, Ralph Cicerone, then the president of the National Academy of Sciences, noted that "in many developing countries these data are not complete or accurate or are not consistently reported." And other scientists suggest some nations might be tempted to simply change their data rather than make the needed economic sacrifices to reduce emissions that are warming the earth.

At the moment, some of the world’s major emitters, including nations in Europe and Asia, are working on a solution to verification that would use commercial airliners carrying new sensors for a process that can measure man-made emissions of carbon dioxide and methane each time they land and take off from a given city.

But Pieter Tans, a senior scientist at the National Oceanic and Atmospheric Administration and one of the pioneers of the measuring systems, worries that, so far, "the U.S. is absent in all of this."

Tans, who has led NOAA’s Carbon Cycle Greenhouse Gases group since 1985, suggested in an interview with E&E News that if the United States developed such a system, it would become a valuable political and diplomatic tool. In the United States, it could be used to help prod states to deliver promised emissions cuts. If skeptical nations questioned the U.S. emissions data, he explained, "we can say, ‘OK, here’s the data. You can make your own estimates of U.S. emissions. Go ahead.’"

At the moment, nations estimate their annual emissions rates by self-reporting, adding up industry, government and utility inventories of the use of fossil fuels and estimates of emissions from coal mining and oil and gas drilling. It is a process that Tans and other scientists dismiss as mere "arithmetic" because it doesn’t involve more sophisticated, real-time measurements that are now possible.

If the United States or other nations demonstrated that an international verification system could work, Steven Wofsy, a professor of atmospheric science at Harvard University, says, the results could also reduce the temptation to cheat.

"If people think you know what they’re doing, then compliance gets better," he said.

Tans’ preoccupation with measuring greenhouse gases began in 1972 in a college in the Netherlands where he stumbled across a book: "Inadvertent Climate Modification: Report of the Study of Man’s Impact on Climate." After reading that, he changed his college major from physics to earth sciences.

As a graduate student in 1978, he helped develop a breakthrough that could allow verification to happen. It involves a tracer, a carbon isotope called C-14, that is present in natural emissions of CO2 from plants and animals. It is not present in emissions that result from the burning of fossil fuels, such as coal, oil products and natural gas, that have been stored underground for millions of years. Tests of air samples collected regularly from sensors on commercial aircraft would provide accurate measures of any depletion of C-14 caused by recent emissions from fossil fuels.

NOAA and the University of Colorado have spent a decade perfecting ways to collect air samples of CO2 and measure the tiny presence of C-14 in them. According to Tans, it would need 5,000 air samples from aircraft and the ground to develop an accurate picture of man-made carbon emissions in the United States. NOAA already collects 20,000 air samples around the world every year. "We could easily do another 5,000," said Tans. "It’s not really a big deal for us."

During the last three years, the Obama administration approved a NOAA budget proposal starting at around $5 million a year to analyze 5,000 C-14 measurements each year.

So far, Congress has rejected it each year, prompting a paper from Tans and other atmospheric scientists asserting that more frequent reports of changes in emissions levels must be part of a "full court press" of measurements that could provide "ground truth" to correct current difficulties with far more expensive satellite greenhouse gas sensors. "Commercial aircraft sampling would cost-effectively address this need," the paper asserts.

At the moment, the political atmosphere in Washington makes the prospect of a U.S. role in verification dubious. Congress has been cutting NOAA’s climate change research projects, and agency officials say it’s too early to know whether a Trump administration budget would change matters.

A CO2 assist from airlines

Getting an accurate sample of what’s floating in the column of air hanging over a city has always been a tricky business.

NOAA started decades ago by using small aircraft to collect air samples upwind of a given city, followed by downwind measurements. Tans and other scientists wanted to see what was different about a city’s exhalations, particularly the decrease in C-14 as power plants, cars and factories added their plumes of greenhouse gases.

Indianapolis was NOAA’s favorite city to measure, a dense circle of population in an otherwise flat, agricultural area. High winds, which can quickly dilute the signature of pollutants in a given sample with outside air, were relatively rare. Los Angeles, with its sprawl, mountains in the east and the wind-whipped Pacific on the west, was often a nightmare to measure. The mountains and coastal weather would sometimes trap columns of stale air over the city and its suburbs.

"So the air can sit there for a few days and suddenly, whoosh, it gets flushed out," Tans explained.

Looking for cheaper, more stable and frequent ways to measure pollution and greenhouse gases, NOAA scientists began attaching sample-grabbing instruments to radio and television towers that gave them access to emissions at different levels over the same location, yielding what scientists call a "vertical profile" of the emissions over a city.

But tall towers weren’t always available, and scientists began looking more to commercial airlines as the most cost-effective and consistent way to collect data for vertical profiles. NASA started the effort during the 1970s, looking for a global way to track air pollution. Europe revived the approach in the 1990s, launching a program called MOZAIC, which has carried sensors on more than 30,000 flights, many of them by Lufthansa and other European airlines.

At the time, other airlines were coming under pressure for their own CO2 emissions. Some wanted to be seen as helping in the fight against pollution. One result was a program by Japan Airlines called "Comprehensive Observation Network for Trace gases by Airliner" (CONTRAIL). That started in 1993, and in 2008, it added more sophisticated equipment to some aircraft to monitor CO2 and methane emissions used on flights in Asia, in Europe and into the United States.

Since the Paris Agreement, the European Union has become more aggressive. MOZAIC has morphed into IAGOS (In-Service Aircraft for a Global Observing System). It is funded by the European Commission, which helped develop a suite of new instruments including sensors that sample CO2, carbon monoxide, methane and water vapor. Lufthansa, Air France, Iberia, Taiwan’s Air China and South African Airways joined it, and the emerging group made overtures to U.S. airlines to become members. One American airline, Hawaiian Airlines, is joining IAGOS this year.

According to a report by the International Meteorological Institute in Stockholm, IAGOS is preparing six instrumentation packages that various airlines will put on as many as 600 flights per year, flights that would measure 6,000 vertical profiles.

"We are encouraged that a number of our members have taken a proactive approach to help gain greater understanding of the current state of climate science," explained Perry Flint, a spokesman for the International Air Transport Association, which represents 83 percent of the total air traffic in the world.

‘Going from research to monitoring’

So far, though, the idea hasn’t really taken off in the United States, although NOAA has an agreement with two airlines to carry sensors that measure water vapor, which is essential for weather reports. Vaughn Jennings, a spokesman for Airlines For America, the major trade association for the U.S. airline industry, said it has never taken a stand on whether its members should carry greenhouse gas sensors.

In a statement, Jennings pointed out that his group has signed an international airlines pledge calling for "carbon neutral growth" from 2020 on and technology and biofuel breakthroughs that could cut C02 emissions in half by 2050. "I would note that U.S. commercial aviation accounts for only 2 percent of the nation’s man-made greenhouse gas (GHG) emissions," Jennings added.

While some space satellites can measure greenhouse gas emissions, they are expensive, depend on computer models and "have all kinds of biases" that make it difficult to reach the precision needed to accurately measure man-made emissions, explained NOAA’s Tans. NASA has recently selected a more sophisticated satellite for a launch in 2022, however, that offers some hope.

It is called the Geostationary Carbon Cycle Observatory (GeoCARB), and would hover 22,000 miles in space, rotating with a constant view of most of the Americas. It comes with a bargain basement price (for a satellite) of $166 million over the next five years, partly because it will hitchhike a ride into space sitting in an unused area of a payload carrying a commercial communications satellite.

Because GeoCARB will use a computer model, it will still need guidance from aircraft measurements to assure the precision that Tans says NOAA needs to verify emissions from a particular spot or region of the globe. "A dense vertical profile network using commercial aircraft would really allow us to eliminate small biases and let the satellites meet their potential," Tans said, hopefully. Steven Wofsy of Harvard said, "It would represent a major step forward in the program" for verification that Tans has been developing.

Steven Hamburg, a biochemist and chief scientist of the Environmental Defense Fund, says the combination of cheaper satellites and more accurate ground sensors is part of an emerging "revolution" that will help expose the flaws in ground-based inventories and estimates of greenhouse gas emissions.

"Think of this as going from research to monitoring," said Hamburg, who used aircraft and sensor-carrying teams on the ground to prove U.S. EPA estimates of methane emissions from the Barnett Shale, a major oil and gas field in north-central Texas, were 90 percent larger than EPA’s inventories predicted in 2015.

When it comes to the Paris Agreement that nations will reduce their greenhouse gas emissions, verification shouldn’t be viewed as a game of "gotcha," Hamburg asserts. "It’s creating a clarity that changes the nature of the conversation."