Inside the retro world of Cuban energy 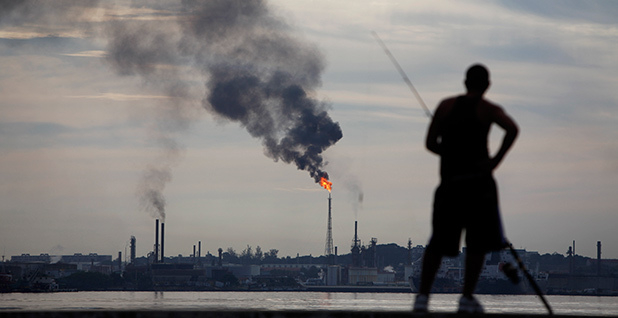 HAVANA — A sense of hope is everywhere on the streets of Havana these days. American flags hang in the bodegas, and when Cubans encounter an American on the street, they ask a weirdly intimate question. ¿Vamos a tener relaciones? Are we going to have a relationship?

The U.S.-Cuba relationship, denied for 50 long years, was a subtle undercurrent to an international renewable energy summit that was held a few weeks ago at the main conference center here.

By watching the presentations and in quiet conversations on the sidelines, it became clear that Cuba’s energy establishment is in a predicament. Decades of isolation, both economic and geographic, has left Cuba outside the march of international trade and technology, and it is struggling to get up to speed with a system it doesn’t understand.

The stakes are high for Cuba, which is trying to increase its share of renewables, even as it makes plans to grow its economy and the size of its electric grid. Officials see solar, wind and biomass as long-term solutions that could wean Cuba off a dangerous dependence on oil from a patron state, currently Venezuela, and help clean up one of the world’s most outdated and dirty energy systems.

On the east side of Havana’s port is the Ñico Lopez gasoline refinery, seized from Shell Oil by Fidel Castro in the early days of the revolution. It has operated ever since. A giant fireball rolls out of its smokestack — a flare of natural gas — and along with it, a cloud of black smoke drifts over the charming colonial buildings of Old Havana, adding a hint of Mordor to your Hemingway.

Meanwhile, the exhaust pipes of the Plymouths and Oldsmobiles from the 1950s leave a whiff of more than nostalgia; their exhaust can be smelled everywhere in a city whose transportation fleet has few pollution controls.

The government has achieved energy savings in the way that only a command economy can. A decade ago, it ordered the mass replacement of millions of inefficient light bulbs and refrigerators. Today, inbound travelers to José Martí International Airport are asked to declare their electrical appliances.

"It is urgent to increase the use of renewable energy sources to achieve in progressive form a change in the structure of the energy matrix of the country; reducing dependence on combustible fossils, energy costs and environmental contamination," Raúl García Barreiro, vice minister of the Ministry of Energy and Mines, said in the keynote speech.

If it expects to meet those goals with the help of the global energy industry, Cuba is in for some surprises. The conference offered numerous clues that, in business practice as much as in culture, the gulf between the United States and Cuba is still a chasm.

The most surprising thing at a Cuban energy conference is that no one is trying to sell anything.

Take the tote, the bag that holds one’s conference materials. The typical American conference tote is festooned with advertising, including the official conference logo and probably those of the platinum sponsors. The Cuban tote is just plain black.

Or consider the badge one wears. American badges are printed in large letters with name and affiliation clearly stated, so one knows at a glance whether to flash a smile or steer clear. At the Havana conference, the badges had tiny lettering and tended to flip over so they couldn’t be read at all. In order to learn who someone was, you actually had to talk to him or her.

At most American energy conferences, speakers from private industry are a leading, if not the principal, source of speakers. They are often viewed as the ones in the trenches who really know the answers. At this conference, most of the 300 or attendees who chatted and smoked in the hallways were professors, engineers or bureaucrats employed by the state — not surprising in a country where the government provides about 80 percent of jobs.

Outside the salons, where girls in short skirts served tiny cups of strong Cuban coffee, other differences became apparent.

An "international" conference here has a different complexion. Most of the foreigner speakers were from Ecuador, Colombia and Venezuela, with others from elsewhere in Latin America and a few from Africa. For decades, Cuba has resolutely traded and sent assistance to countries like these, which it sees as its peers in the fight against American imperialism.

But, as several speakers noted, Latin America isn’t where the action is; it lags far behind regions like China, North America and Europe in implementing renewable energy. No Americans or Chinese speakers were in attendance. Europe was represented by a half-dozen Germans, along with a few Slovaks and Brits.

One foreign attendee was a representative of Gamesa, the Spanish wind company. Asked about the investment opportunities in Cuba, he grimaced.

Cuba’s energy intelligentsia is hungry for new information. Most attendees couldn’t afford to stay at the conference hotel, much less travel to foreign conferences, and were eager to hear from experts abroad. They crowded into a conference room and listened attentively as a German professor talked for an hour and a half, in English without translation, about Germany’s renewable energy program.

A single day’s program spanned the crosscurrents between the communist past and the possibly more capitalist future.

In the morning, a Cuban expert in photovoltaics gave an upbeat presentation on the state of the international solar industry, with snazzy PowerPoint slides that included data from the U.S. Department of Energy’s SunShot Initiative and green-jobs data from the National Renewable Energy Laboratory in Colorado. His take-home message: To adopt solar, Cuba must master the rules of finance.

An afternoon session addressed just that topic. To a sparse attendance, a German lawyer offered a quick primer on due diligence — a staple of any U.S. law school, but an unfamiliar idea here.

Then a representative from a city government stood to give a lecture on the basics of renewable energy development and financing. Reading from cue cards projected on the wall, she spoke at a rapid clip and in a voice that countenanced no disagreement. Her presentation was short on details and almost free of numbers, but she sternly reminded her audience several times that renewable energy is a means for overcoming social inequality.

A speaker from Cubasolar, a semi-official government agency that promotes solar power, then offered a critique of oil. He put it in terms that would rarely be heard from a microphone at an American conference, saying that petrodollars "function as a lubricant in the orgiastic dances of transnational capital."