Inside the scramble to give Trump his epic July 4th party 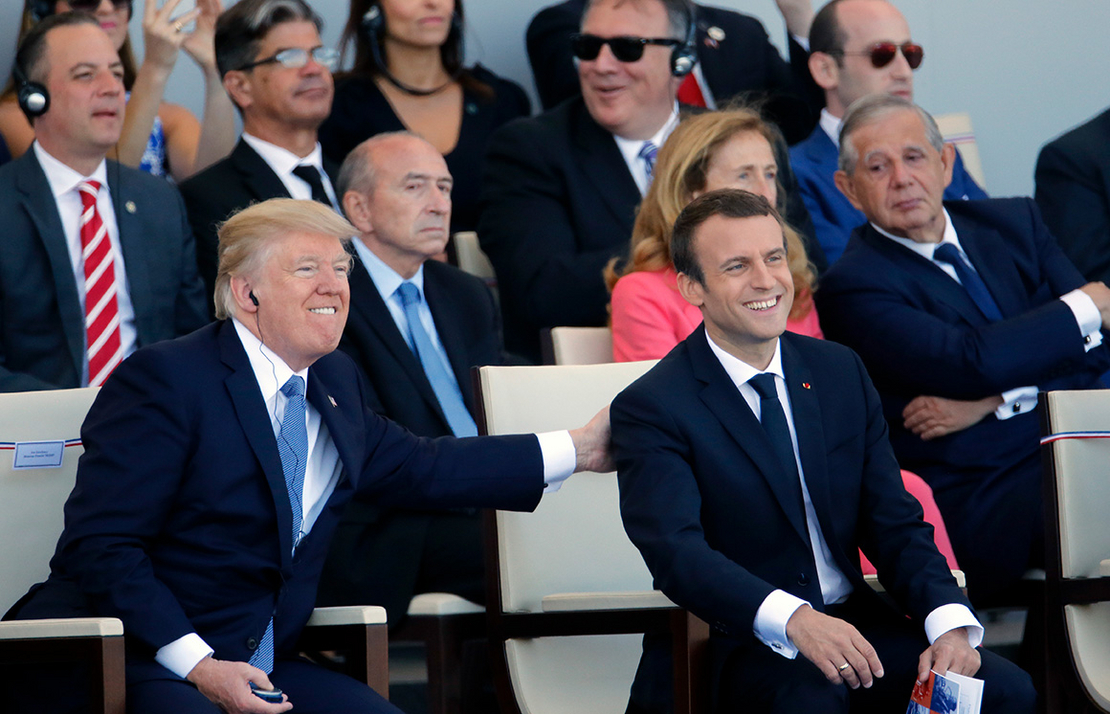 Former President Donald Trump and French President Emmanuel Macron are shown attending the traditional Bastille Day military parade on the Champs-Élysées in Paris on July 14, 2017. The parade that day inspired Trump to amp up Fourth of July celebrations in Washington. Thierry Chesnot/Getty Images

Early in 2019, President Donald Trump fired off a Twitter version of a “save the date” for his dream July 4th celebration at the Lincoln Memorial.

“HOLD THE DATE! We will be having one of the biggest gatherings in the history of Washington, D.C., on July 4th. It will be called ‘A Salute To America’ and will be held at the Lincoln Memorial. Major fireworks display, entertainment and an address by your favorite President, me!” he wrote on Twitter that February.

He was reportedly wowed when he attended a Bastille Day parade in Paris and wanted to put on his own show of military might in Washington. Spurned in 2018 when he was forced to cancel plans for a military parade, Trump had big plans for the July 4th event.

He wanted a grandiose fireworks display, a military flyover and tanks at the Lincoln Memorial.

The president’s ostentatious plans set off a monthslong frenzy of planning by government aides, including National Park Service employees and military officials tasked with overseeing the logistics of the event, according to a tranche of emails posted on NPS’s website. Those emails, containing communications regarding Trump’s “Salute to America” plans, were requested by the Associated Press in July 2019 and just released Tuesday.

They offer a look behind the scenes at how Trump appointees and other government officials scrambled to grant the president’s wish for an epic July 4th bash, despite concerns about damaging the Lincoln Memorial, the threat of rain and an algae outbreak.

Trump got his party. The Navy’s Blue Angels flew above the crowd that gathered despite the rainy night. Bradley Fighting Vehicles were parked in front of the president, who gave a 47-minute speech behind bulletproof glass at the Lincoln Memorial.

But for months leading up to the event, Trump appointees and civil servants were hustling to put all the pieces in place.

In June 2019, government officials were worried about the logistics of getting tanks to the Lincoln Memorial, the emails show.

Jeff Reinbold, the superintendent of the National Mall and memorial parks, wrote a June 2 email to National Park Service officials titled “Limitations of Lincoln Plaza,” where he warned of the “potential failure of the East Plaza / Approachway under the weight of an Abrams tank.”

But Trump’s plan for tanks rolled along. On June 25, the operations director for the White House military office met with park service officials to discuss their options. The White House official, whose name was redacted in the emails, later followed up with the park service to ask for help figuring out whether the area around the memorial could hold the tanks’ weight.

“I know that’s a tough challenge and as you stated exceptionally problematic, but want to see what we can do to meet POTUS’ intent,” the White House official wrote.

That set off a search within the park service for an expert on how much weight the plaza could hold. That person wasn’t easy to find.

“Who is our subject matter on weights and impact on the plaza/grounds?” National Park Service spokesperson Mike Litterst wrote in an email. He wound up asking Audrey Tepper, the park service’s historical architect, about the weight limitations.

She wrote back: “This question is impossible for me to answer definitively and really requires the expertise of a structural engineer.” She added, “We are not equipped with the technical know-how to determine what the site can accommodate.”

Litterst asked Tepper if she or another colleague could check with the National Capital Region about finding a structural engineer. “I have back-to-back meetings this morning, so won’t be in the office until after lunch. Can this wait?…NOOO,” Tepper wrote on June 26. “I don’t even know if NCR has a structural engineer now.”

Officials were considering alternatives to the Abrams tanks, the emails show, in the event that they were deemed too heavy. The Abrams tank “destroys the enemy using mobility, firepower, and shock effect,” according to the Army. They each weigh about 70 tons.

That was too much weight to roll across the Arlington Memorial Bridge, a DOT official wrote to Shawn Benge of the National Park Service on July 2.

“[W]e don’t allow buses or even emergency vehicles on the bridge,” the DOT official wrote. “A 75-ton tank would definitely be prohibited.”

When Trump spoke on July 4th, Bradley fighting vehicles were parked in front of him.

Asked for comment about the 2019 deliberations, Litterst told E&E News in a statement today, “The National Park Service did extensive due diligence regarding the static vehicle displays for the 2019 Salute to America to ensure the protection of the memorial, including that the size and placement of the military display vehicles would not damage the plaza and foundations of the memorial.” He added, “Following the event’s conclusion, inspections were conducted to verify that no damage had occurred.”

Don’t ‘get ahead of the White House’

The logistics of pulling off the event were overwhelming. Maps of the National Mall, contracts with fireworks providers and tables of cost estimates are scattered throughout the batch of documents released under FOIA.

Officials were seemingly facing new demands at every turn to make the celebration bigger and bolder than ever before.

In one email, Litterst said a reporter had called “asking about reports they’re hearing of a second fireworks show.”

He added “sigh” in italics.

The effort involved multiple agencies, including the White House. It was tough to keep a lid on information, and once news emerged that Trump planned to speak at the Lincoln Memorial for the bash, officials were told to stay in their lane.

“And anything you can do to remind the NPS to not get ahead of the White House on this front would be helpful,” Trump White House spokesperson Judd Deere said in an email.

“IT WASN’T US!!!!” Litterst reacted with bolded font in a separate email to another colleague. “I hope [then-Interior spokesperson Faith Vander Voort] points that out to him.”

Venue switch to the Jefferson Memorial?

At one point in the planning process, some at the White House considered having Trump speak at another president’s memorial, south of the core of the National Mall — a request that would have delayed a major maintenance project. “Is it possible to do a Presidential speech at the Jefferson Memorial,” Zach Parkinson in the White House’s communications office asked Interior officials on March 6, weeks after Trump first raised the idea of an event at Lincoln.

That set off a scramble among Interior and park service staff to figure out the logistics and how many attendees could fit at the Jefferson Memorial. Officials soon learned that the roof of the memorial would soon be replaced and the entire structure covered in scaffolding.

“That would certainly have a detrimental effect on using the memorial as a backdrop for an event,” Litterst told colleagues.

In the following days, officials considered plans for getting around the scaffolding issue. “The administration could speak to how Deferred Maintenance is being addressed,” suggested Sean Kennealy, who oversees architecture and engineering for the National Mall and its buildings.

Some at NPS considered delaying the roof project to accommodate Trump’s request. It’s unclear where the suggestion came from, but officials sought to highlight how detrimental a delay would be. “I think it’s important to show the impact on # of days as well as on costs,” argued Lisa Mendelson, NPS’s regional leader.

By March 20, however, the Jefferson Memorial idea appears to have been scrapped. The scaffolding would go up as planned, Reinbold, the National Mall’s superintendent, told colleagues.

The scrambling started shortly after Trump first mentioned his “Salute to America” concept. “It’ll be a, really a gathering, as opposed to a parade I guess you’d have to say,” he said in an open Cabinet meeting Feb. 12. “Perhaps at the Lincoln Memorial. We’re looking at sites. But we’re thinking about doing something which would become perhaps, become a tradition, Salute to America, on July 4 or July 4 weekend, somewhere around that area.”

By Feb. 14, NPS staff were rushing to figure out how to change the plans they’d already made for July 4 to fit Trump’s vision — mostly with a longer and bigger fireworks show. “Thanks again to everyone for dropping what you were doing and coming to [the Main Interior Building] for the Fourth of July meeting,” Litterst emailed colleagues.

Later that day, NPS officials reached out to Garden State Fireworks Inc., the agency’s longtime contractor for the show, to see if it could modify its contract to lengthen the show, add special effects and move the launch to a barge in the Potomac River — a move that would open the area in front of the Lincoln Memorial, which is usually where the fireworks are launched, for Trump’s speech.

David Bernhardt, then Interior’s acting secretary, was also closely involved at an early stage. He spoke to Litterst on Feb. 15 about how to “enhance” the annual parade, Litterst told colleagues.

“More fireworks??” was the subject of a May 24 meeting among NPS officials. Earlier that day, they had gotten notice that Grucci was already drafting plans for its show. But the email to NPS staff came from the White House, forwarding an email from Grucci CEO Phil Grucci.

“Lots of logistics to be worked out (and the window is closing), but we know a lot more than we did a few hours ago,” Litterst said in an email later that day in which he sought to schedule the two shows separately so that “we don’t alienate our long-time contractor,” Garden State Fireworks.

Phantom lobbied the White House against tariffs on Chinese goods, including fireworks, in advance of Trump’s decision to delay the planned levies, according to ABC News.

An algae problem cropped up at Constitution Gardens, near the Lincoln Memorial, a few days before the event.

“Con Gardens will be a great place to watch the fireworks,” Reinbold wrote on June 29. “Unfortunately, it looks rather nasty.” He asked, “[W]hat can we do in a couple days to spruce it up? I’m not above putting on [waders] and skimming algae if that helps. I’m serious.”

Jeff Gowen of the park service weighed in, “We’re going to rent a vac truck and try to pull the algae to the edge and suck some of it out.”

But some officials were concerned about a massive shop vac, “because there are fish out there and ducklings,” another person wrote. They floated calling a contractor “to get a somewhat ecological approach to dealing with this. If we go all out and don’t consider all the factors we have a good chance of making the situation worse.”

A contractor could come out on July 2 to apply chemicals that “may help reduce the visible algae with a credit card purchase,” Catherine Dewey of the park service wrote. “We can get permission as an emergency application from NR higher ups.”

Scattered thunderstorms were in the forecast the day ahead of the event, and a CNN reporter reached out on July 3 to ask whether there was a bad weather contingency plan.

Ultimately, it did rain on Trump’s Independence Day parade. Crowds were drenched as they waited to see the president, but his speech, the military plane flyovers and the fireworks went on as planned.