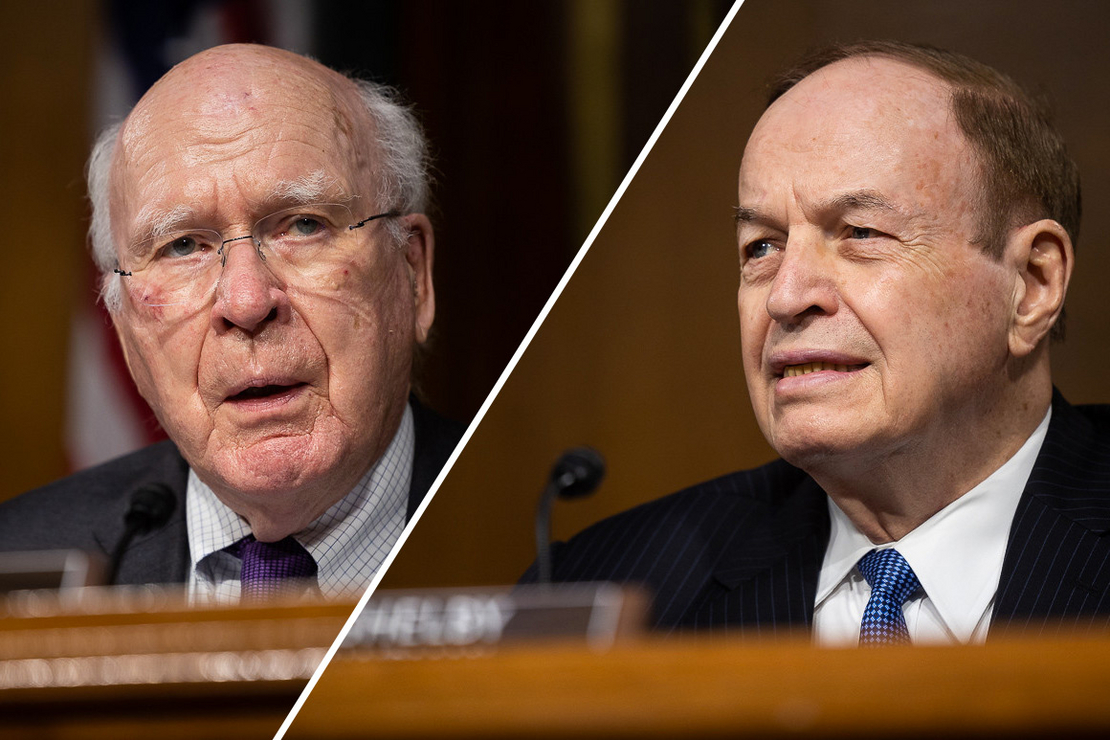 Senate Democrats yesterday released nine fiscal 2022 spending bills with significant proposed increases for environment and public land priorities. Lawmakers are now focused on what can make it into law so they can avoid a shutdown in December.

The bills emerged after Senate Democratic and Republican appropriators failed to reach a deal on overall fiscal 2022 discretionary levels and halted committee markups. The bills are now the Senate Democrats’ opening bid in negotiations with the House over a year-end, omnibus package.

"The alternative to completing the appropriations process is a full-year continuing resolution, which does not serve the American people and locks in outdated spending priorities,” Senate Appropriations Chair Patrick Leahy (D-Vt.) said yesterday in calling for renewed “bicameral, bipartisan” discretionary spending that would cover all 12 annual bills.

Appropriations Committee ranking member Richard Shelby (R-Ala.) however, blasted the bills as “partisan” and called them a step in the “wrong direction.” He said Democrats are using the spending process for “pushing the Green New Deal” and its “radical” environment and climate policies.

The League of Conservation Voters praised the plans. “These bills would adequately fund the Environmental Protection Agency and Park Service, among other federal agencies, to reverse more than a decade of underinvestment and thousands of staff positions lost and make sure these agencies can deliver on their missions to protect human health and the environment and preserve the natural and cultural resources and values of the national park system,” said Matthew Davis, LCV’s senior director of government affairs.

In the Senate’s Interior-Environment bill, EPA would receive $10.5 billion for fiscal 2022, about a $1.3 billion increase over current levels. The proposal is less than the $11.2 billion slated for EPA in President Biden’s budget plan and the $11.34 billion approved by the House in a seven-bill package, H.R. 4502, this summer (E&E News PM, July 29).

Still, the Senate bill would support a notable Biden goal: adding nearly 1,000 EPA employees. In addition, the legislation would boost environmental justice work across the agency to more than $200 million, far greater than the current $12 million. The proposal includes $100 million in environmental justice grants.

The Senate legislation also backs EPA’s work on climate change and enforcement of environmental laws. Further, appropriators are directing the agency to move forward with studying the nexus between air pollution and the spread of the COVID-19 virus, according to an explanatory document on the bill.

The Senate bill also takes aim at lead in drinking water, proposing $72 million in grants for replacing lead pipes as well as $35 million for lead contamination in drinking water at schools and child care centers. Such funding would be on top of amounts proposed in the bipartisan infrastructure package and the pending budget reconciliation plan.

EPA’s geographic programs — the regional cleanup efforts for lakes and bays that are popular with lawmakers — would receive more than $596 million in the Senate bill. That includes $350 million for the agency’s Great Lakes Restoration Initiative and $90.5 million for the Chesapeake Bay Program.

The Water Infrastructure Finance and Innovation Act loan program, also popular on Capitol Hill, would receive $80 million in the Senate plan, a boost of $15 million over current funding at EPA.

One notable area receiving a boost would be EPA’s long-plagued Superfund program, for which the Senate bill proposes $1.33 billion, including a $100 million increase for the National Priorities List. The bill similarly proposes $126 million in grants for the agency’s brownfields program, which focuses on restoring contaminated areas. That would be a $35 million increase.

The proposal singles out per- and polyfluoroalkyl substances, a mounting priority in spending bills, including a boost for studying the chemicals. The bill proposes an additional $1 million for accelerating PFAS research, in addition to $10 million to support states, territories and tribes in their public water system supervision programs. EPA yesterday released a plan for action on the chemicals (Greenwire, Oct. 18).

The Interior Department would get $15.7 billion under the Senate plan, almost the same as proposed by the House and roughly $2 billion above current spending levels.

“For too long, programs protecting public lands, public health, and the environment and supporting tribal communities have been operating on fumes,” Sen. Jeff Merkley (D-Ore.), chair of the Senate Interior-Environment Appropriations Subcommittee, said in a statement yesterday.

The proposal would provide $3.5 billion for the National Park Service, $340 million more than in the previous fiscal year. The money would support the hiring of more than 1,000 additional NPS employees.

A summary described a need to “restore losses in staff capacity that have limited the Service in addressing challenges, including increased visitation and the impacts of climate change.”

An additional $120 million in new conservation initiatives would help fund the creation of a Civilian Climate Corps — a green jobs training and placement program that’s being considered as part of the reconciliation package.

The Forest Service would receive $6.2 billion, which is slightly less than the Biden administration requested overall, but $817 million — or 15.8 percent — more than the current fiscal year’s enacted level.

Funding for removal of hazardous fuels, such as dead trees, from national forests, would double to $360 million, according to materials provided by the Senate Interior-Environment panel.

Senate appropriators would give certain forest programs bigger boosts than the administration originally proposed, such as $344 million for state and private forestry programs — $45 million more than the budget request. Those funds help states and localities reduce wildfire risks and support reforestation, among other efforts.

The Senate bill would allocate $152 million for the Bureau of Land Management’s Wild Horse and Burro Program — the exact amount President Biden requested in his proposed fiscal 2022 budget.

Biden’s Interior Department certainly needs the money, as it has already committed to implementing a Trump-era strategy outlined to Congress last year that increased roundups of excess animals.

BLM plans to round up and remove about 11,000 wild horses and burros from federal rangelands during this fiscal budget cycle, with intentions to ramp that up in fiscal 2022 to about 20,000 animals.

The measure directs agencies to “continue to work to ensure that environmental remediation” occurs along the U.S.-Mexico border, where Democrats believe the Trump administration’s efforts to build walls to curb illegal immigration have devastated local wildlife habitats.

And, in realizing another priority of the Biden administration, the bill includes $58.2 million for Interior’s initiative to begin replacing vehicles at the end of their life cycles with zero-emission vehicles and providing, or securing access to, electric charging and hydrogen fueling stations to support the ZEV transition.

NOAA would get nearly $6.3 billion in fiscal 2022 under the Senate appropriations bill that provides funding for the Commerce Department. Overall, the bill would boost NOAA’s spending by $845 million above the amount enacted for fiscal 2021.

The broader bill also includes funding for the Justice Department, along with science and other related agencies such as NASA and the National Science Foundation.

The Senate bill would set aside $405 million for NOAA to continue construction on its three new polar weather satellites, which provide 85 percent of the data used to forecast the weather.

The House Appropriations Committee in July approved a record $6.46 billion in spending for NOAA, including for new mandates related to climate change (E&E Daily, July 16). H.R. 4505 was set to reach the House floor this summer but has not gotten a final vote.

The Senate’s State, Foreign Operations and Related Agencies spending bill contains $1.45 billion for the Green Climate Fund, raising the possibility that Congress could dole out the first-ever direct appropriation to the U.N. program, with Biden headed to international climate talks at the end of the month.

That would be more than the White House’s $1.2 billion request for the Green Climate Fund, and it would represent a breakthrough on a program that has been the subject of a partisan fight for years.

House appropriators, meanwhile, proposed a $1.6 billion allocation for the fund earlier this year in H.R. 4373. GOP lawmakers attempted unsuccessfully to strip it out during floor proceedings (E&E Daily, July 29).

The Senate Transportation-Housing and Urban Development bill would allocate $82.9 billion, $8.3 billion more than the fiscal 2021 enacted level but $1.1 billion less than the House’s version.

Money would go to investments in the nation’s crumbling infrastructure and housing programs that reduce homelessness. It aims to shore up the country’s transit systems, which are vulnerable to the impacts of climate change. Specifically, DOT would receive $90.5 billion, of which $29.1 billion is discretionary. HUD would receive $65.4 billion.

Sen. Brian Schatz (D-Hawaii), chair of the T-HUD spending panel, said the money would improve the nation’s transportation systems and provide safe and affordable housing for those who need it most.

“It also represents our commitment to building a stronger, more resilient infrastructure system in the face of the climate crisis and worsening natural disasters,” he said in a statement.

The bill would provide $300 million for a new grant program to help the nation’s transportation infrastructure become more resilient to the impacts of climate change, from seal-level rise, coastal erosion, extreme weather, earthquakes and flooding.

The measure includes a $50 million increase for the Federal Aviation Administration to research sustainable aviation fuels, $11 million to flip DOT’s fleet to all zero-emission vehicles and $18 million for ZEV research for transit systems.

The Senate Defense spending bill for fiscal 2022 includes $761 million to address contamination from per- and polyfluoroalkyl substances, also known as PFAS.

"The Committee remains concerned about the health implications of contaminated drinking water caused by per- and polyfluoroalkyl substances," Senate appropriators wrote, tasking the Pentagon to come up with a plan for using the money.

The spending bills are separate from the National Defense Authorization Act. The House in September approved its version with PFAS, climate, and other energy and environment provisions (E&E Daily, Sept. 24).

The House has approved nine of its 12 bills. Pending are the Commerce-Justice-Science, Defense and Homeland Security measures. But they’re unlikely to reach the floor by themselves.

The focus is now on a grand bargain between the House and Senate. If lawmakers can’t get it done by Dec. 3, they’ll need to approve another continuing resolution. That’s the same day the debt ceiling needs to be raised.