Inside the Trump admin’s power struggle over carbon regs 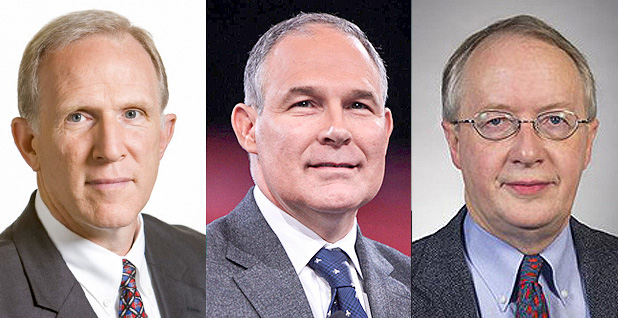 Transition officials debated internally about whether the Trump administration should seek a major reversal of U.S. EPA’s core authority to regulate greenhouse gases, and it continues today, according to sources.

No decision was made about potentially overturning the agency’s endangerment finding before President Trump was sworn in, and three sources said independently that a future determination would likely be made jointly by EPA Administrator-designate Scott Pruitt and White House officials.

The debate reveals an aggressive presence in Trump’s orbit. It exceeds the president’s own promises to terminate climate regulations like the Clean Power Plan and withdraw from the Paris Agreement. The endangerment finding undergirds both of those programs, and conservative opponents to climate action believe that undoing it is the only way to permanently prevent future carbon regulations.

"My personal opinion is that the endangerment finding should be reopened and should be overturned," said Myron Ebell, who argued for undoing the finding as the leader of Trump’s transition team at EPA.

Ebell isn’t alone. David Kreutzer, an economist with the Heritage Foundation who is working at EPA as a member of Trump’s beachhead team, argued in a 2013 paper about the inaccuracies of the endangerment finding.

To this source, rolling back the finding would declare a de-facto climate policy: Warming isn’t real.

Both of the sources believe it’s unlikely that efforts to reverse the endangerment finding would succeed, given the scientific, legal and political hurdles. One thinks that Pruitt is strongly disinclined to take it on.

‘I don’t know quite how they’d do it’

Ebell said there’s disagreement about whether to target the finding.

"A lot of people in the legal community are opposed to it because they think it would take a huge effort. My answer to that … is yes, but if it’s reopened, it will also take a lot of work by the supporters of the endangerment finding to defend it," he said. "These rules in the Clean Air Act to regulate greenhouse gas emissions, I don’t think we’re ever going to get rid of them permanently unless we get rid of the endangerment finding."

Pruitt signaled in his confirmation hearing that he sees no reason to review the endangerment finding, but sources close to the transition believe he’ll have to make a decision one way or the other after he’s sworn in.

"I don’t know quite how they’d do it," she said in an interview. "You just don’t with the wave of your pen get rid of a Supreme Court decision. This is something that affects all of us."