Inside the Trump EPA’s final moves on climate 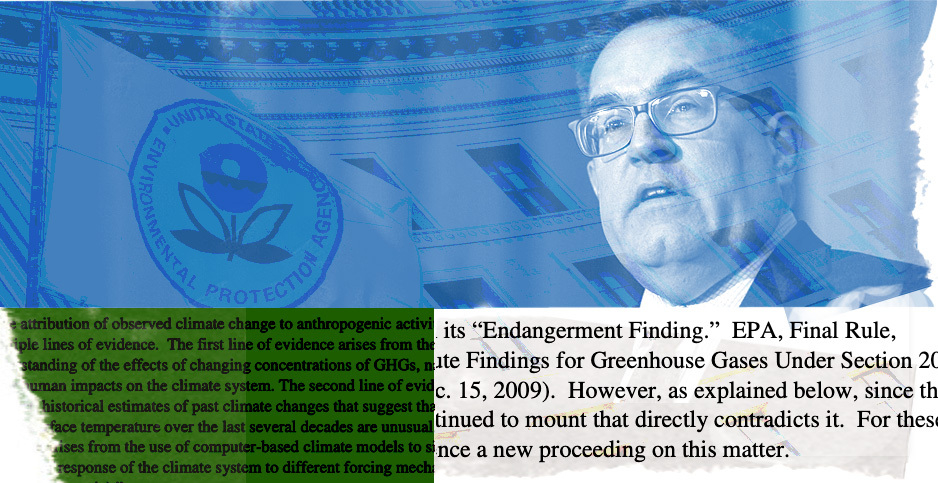 David Fotouhi, then EPA’s acting general counsel, sent an email to Wheeler with the two documents for his signature, which were then to be posted on EPA’s Office of Air and Radiation webpage.

Wheeler, now in a likely temporary Cabinet post under Virginia Gov. Glenn Youngkin (R), has faced questions over his record at EPA, including criticism from Democrats and environmental groups that he did little about global warming. In testimony before Virginia state legislators this January, Wheeler said he didn’t believe it was appropriate to open up the endangerment finding.

He also acknowledged that some wanted him to go further at EPA.

“I did not go as far as a lot of people would have liked me to do because the Clean Air Act is very limited in scope,” Wheeler said. “I had very narrow lanes in which to enact any regulations to address the issue.”

Wheeler’s denial to green groups expressed similar sentiments. “The plain meaning and structure of the Clean Air Act precludes regulation of greenhouse gas as a criteria pollutant,” it said.

Wheeler didn’t respond to questions from E&E News for this story.

Mandy Gunasekara, who served as chief of staff at the Trump EPA, said Wheeler did push climate change-related regulations, such as those dealing with methane pollution and power plant, car and aircraft emissions.

“We achieved all that in four years,” she told E&E News, adding that Wheeler wanted rules that could withstand legal scrutiny and “move the needle to achieve a lower emissions future.”

Some of those rules have been pulled back by Biden’s EPA, which has pledged an aggressive tack on climate change.

Having already finalized clean car standards, the Biden administration is moving forward with greenhouse gas rules for the power and oil and gas sectors. A methane rule for the petroleum sector has been proposed. The administration’s rulemaking agenda shows that regulations for new and existing power plants are expected this summer.

Two weeks before Wheeler signed the denials, Trump appointees were pushing for action.

“The third floor and OAR leadership would like [redacted],” Fotouhi said in an email with “Endangerment finding petition denial” as the subject line. “Would it be feasible to see a draft by Monday?” The EPA administrator’s office is located on the third floor of agency headquarters.

By Jan. 14, Fotouhi said he wanted a draft that day.

“I got an update from Anne and Karl that didn’t sound promising on this,” Fotouhi said in an email. “I think we may need to deploy an alternative approach.”

Anne Idsal Austin was EPA’s top air official at the time. Karl Moor was a deputy assistant administrator in that office. Moor declined to comment when contacted by E&E News. Idsal Austin didn’t respond to questions for this story.

Adam Gustafson, then a deputy general counsel at EPA, said in a subsequent email, “Karl’s message is not encouraging.”

With less than a week to go in the Trump administration, Gustafson had received an impartiality determination because of his past client work so he could work on the endangerment finding petition (Greenwire, May 20, 2021).

Fotouhi and Gustafson declined to comment for this story.

Gunasekara, now a principal at Section VII Strategies, remembered discussing the petitions when she was serving in EPA’s air office and with Wheeler after he was sworn in as EPA deputy administrator, saying, “We started the process talking about these early.”

“The email traffic you have is indicative of the last open-ended items we were trying to finalize, but the larger analysis was started well before,” she said. “It is always a flurry of activity to wrap things up.”

‘Need to revisit’ with ‘incoming team’

Once Wheeler signed the denials, aides rallied to post them on EPA’s website. They were not successful.

On Jan. 20, 2021, a series of emails show Gustafson pressing for the documents to go online.

He emailed Nancy Grantham, the top career official in EPA’s Office of Public Affairs, at least three times in the last hour of the Trump administration, sending instructions on how to post the denials.

At 11:58 a.m. that day, Grantham responded, “As discussed, the transition is now official, so we need to revisit this posting with the incoming team.”

Biden had completed saying his oath of office minutes before, but he would not be president officially until noon, according to the 20th Amendment, constitutional experts told The Washington Post.

Gustafson, a Trump appointee, formally exited EPA at noon on Jan. 20 as well, according to his resignation letter.

“It was odd that they didn’t post it, because that was normal course: When the administrator signs something, it is posted on the website,” Gunasekara said.

Kevin Minoli, formerly acting general counsel at EPA, told E&E News, “One reason that the prior administration may have wanted the documents to be posted on the agency’s website would be to ensure that they could be challenged in court.”

He noted that the endangerment finding was finalized in 2009. EPA later denied petitions to reconsider it, which was upheld in appeals court.

‘We will get some questions with this one’

Records show top political appointees — such as Tomás Carbonell, a deputy assistant administrator in the air office, and Melissa Hoffer, then serving as acting general counsel — were among invitees listed on a meeting request form for Joe Goffman, EPA’s top air official. The meeting, scheduled for February last year, was to “discuss paths forward” regarding Wheeler’s denials.

“As you can see, we landed on short and sweet,” Grundler said. “I expect we will get some questions with this one.”

Goffman, Carbonell and Alejandra Nunez, another deputy assistant administrator in the air office, were also alerted with “FYSA” on EPA Administrator Michael Regan’s withdrawal of Wheeler’s denial of the endangerment finding petitions.

They were also flagged on a prepared statement about the withdrawal.

Regan said in a letter to the Competitive Enterprise Institute he was withdrawing Wheeler’s denial of the group’s petition to reconsider because “the response does not provide an adequate justification for the denial.”

Earlier that month, Jane Nishida, then serving as EPA’s acting administrator, withdrew denials for petitions from several groups too that had pushed for a more expansive use of the Clean Air Act to fight climate change.

“I am withdrawing the denial of your petition, as the agency did not fully and fairly assess the issues raised by the petition,” Nishida said to each of them.

The Center for Biological Diversity and 350.org’s petition, filed originally in 2009, would have EPA set National Ambient Air Quality Standards, or NAAQS, for greenhouse gas emissions.

“We weren’t surprised that Wheeler denied the petitions, given the Trump EPA’s hostility to protecting the climate,” Maya Golden-Krasner, climate deputy director and senior attorney at the Center for Biological Diversity, told E&E News, adding they were “pleasantly encouraged” by withdrawal of the denial.

“By setting a nationwide greenhouse gas pollution cap under the Clean Air Act, the Biden administration could enact the most consequential climate protection we’ve ever had,” she said. “The cap would apply across all polluting sectors, and each state would be given flexibility to choose how they cut pollution to meet the cap.”

EPA also withdrew its denial of Food & Water Watch’s petition to have the agency regulate greenhouse gases as hazardous air pollutants. That has been perceived as a delay tactic by EPA.

“I was a bit surprised to see EPA withdraw their denial, but I recognize it was a way to prevent litigation while they continued to ignore the GHG regulation petitions filed by public interest groups,” Adam Carlesco, a staff attorney for the group, told E&E News.

“EPA reviewed the denials issued by the prior administration and ultimately decided to rescind them,” Carroll told E&E News. “EPA continues to work on the response to the petitions and will issue an FR notice when the review is complete.”

‘We haven’t heard anything back from EPA’

Those who had their petitions denied say they haven’t heard from EPA since they were withdrawn a year ago.

Some have used the time to continue to push for their cause.

“We haven’t heard a word from them, but they heard from us,” Harry MacDougald, an attorney for the Concerned Household Electricity Consumers Council, told E&E News. His group has pushed to overturn the endangerment finding and submitted another supplement to their petition last year.

The Center for Biological Diversity sent a follow-up letter to EPA last April updating the case for air quality standards for greenhouse gases.

“But we haven’t heard anything back from EPA,” Golden-Krasner said.

The Texas Public Policy Foundation filed a lawsuit against EPA over the agency withdrawing its denial of the group’s petition on the endangerment finding. That litigation remains ongoing, and its petition is still pending, Robert Henneke, the foundation’s executive director and general counsel, told E&E News.

Wheeler is now serving as Virginia’s secretary of natural and historic resources. But his confirmation was blocked by state Senate Democrats last month. He will continue to serve in that post until the close of the Virginia legislative session later this month, although Youngkin hopes lawmakers will reconsider his nomination.

“The General Assembly has until they adjourn sine die to reconsider their decision to reject the most qualified Secretary of Natural and Historic Resources in many years,” Youngkin spokesperson Macaulay Porter told E&E News. “The governor sincerely hopes there is a path forward and remains open to further conversations.”

Meanwhile, those calling for climate action by EPA have been left waiting. Some do not have much hope.

“Unfortunately, I have little faith that Regan’s EPA is going to take anything resembling bold action when it comes to regulating GHG emissions and will instead simply tighten technology-based standards for permitted emitters,” Food & Water Watch’s Carlesco said.