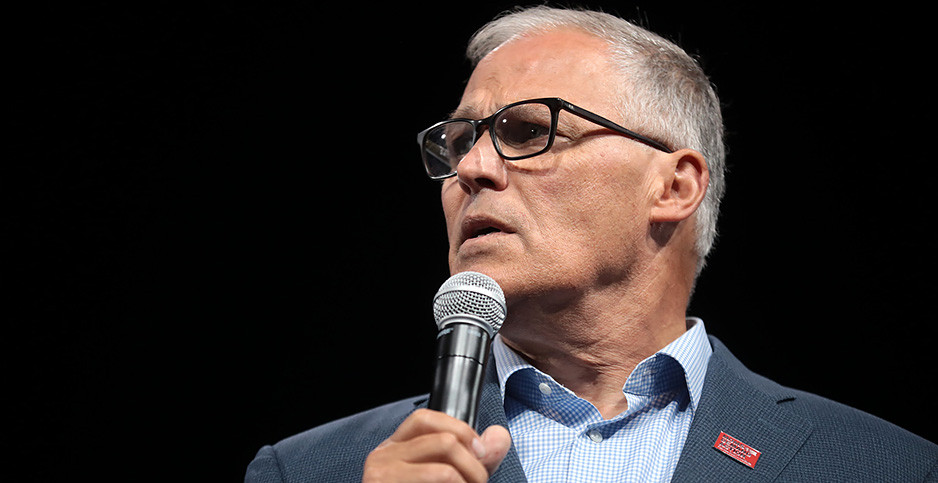 Washington Gov. Jay Inslee was talking to a reporter this week about the advice he would give to President Biden when his phone rang.

It was the White House.

Inslee, a Democrat, told the president’s advisers to stop being humble about the $2.2 trillion infrastructure package Biden unveiled last week. Change the tone. Brag about how much it would do to slash carbon pollution and how it was bolder than any other previous proposal.

That was his advice.

"They legitimately can claim how bold this plan is," Inslee told E&E News after hanging up with the White House. "It’s just a tone. I want to give license to be bold, just in how they talk about it."

Inslee said he is impressed by how far Biden has come on climate since the early days of the 2020 race. He said the country is ready for a clean electricity standard — the cornerstone of Biden’s climate plan — almost a year after Washington state passed a similar law to eliminate power-sector carbon emissions by 2045.

Inslee also said he wants Biden to put a definitive timeline on when he will phase out the internal-combustion engine in new vehicles.

"We have major manufacturers understanding that this is both necessary and technologically achievable; the public has wide acceptance," he said. "I do believe it’s a necessary step."

Inslee campaigned on an expansive $9 trillion climate spending plan, comprising $3 trillion in public and $6 trillion in private dollars, that sought to zero out emissions in the U.S. electricity sector, buildings and new vehicles by 2030. He understands that some climate advocates want more from Biden.

He doesn’t want them to be quiet.

"We need people to push," Inslee said. "I wouldn’t ask anybody to pull any punches."

Below is a transcript of Inslee’s interview with E&E News.

Your fingerprints are visible on the infrastructure package. What do you think are its greatest strengths and weaknesses?

This is Joe Biden’s plan. This isn’t anybody else’s. He’s put the muscle in it; he’s put the intellectual heft behind it. He’s decided to put his chips down on it. And people ought to recognize that. It’s quite a feat.

It’s been extremely comprehensive. That’s the one thing I think that is most impressive to me, that he’s touched almost every corner of the job-creating opportunity that we have, and I think that’s great.

So, No. 1, I’m impressed at how comprehensive it is. Two, I think that, as far as its scale, I think that the administration is being too humble. When I look at the numbers, I believe that their actual investments are greater than some of the numbers that may be publicly used, which in my mind is a good thing. Its scale is most impressive, even more impressive than some of the branding that they’ve used.

So I feel good about it, but now we need Congress to weigh in on it. I believe both being comprehensive and its scale is vast, as it should be. I think it’s in the realm of being able to be passed through Congress, which is important, as well. I think it’s both ambitious and realistic at the same time.

What about the clean electricity standard? How do you see that going through Congress? And is a carbon price needed?

Your second question is [carbon] pricing. I have long believed in having both the regulatory approach and a price signal, which can be a way to finance your infrastructure investments. I’ve long supported that position, but they’re not the only game in town. The president has figured out how much he can bite off and chew, and I’m honoring his judgment in that regard.

You’ve had some challenges with carbon pricing in Washington. Does it have a political future?

I would not rule it out. We are seeking to get a cap-and-invest bill right now in my Legislature. It’s not passed yet. We have it up and down the West Coast, except for my state. So we want to complete that puzzle on the West Coast. I do believe it’s a valid policy, and both from being able to generate the revenues to make the investments and from the signal to the economy, as well. I do believe it has continued value, and I believe it will continue to have discussion.

You had a goal of banning new gasoline-powered vehicles by 2035. Do you think Biden should announce a similar date?

Yes, we are tied to the California ZEV [zero-emissions vehicle] mandate, which is 2035, so my state today effectively has that requirement of 2035, and I’m relatively confident that’s going to succeed going through the regulatory process. But yes, I do think it makes sense. We have major manufacturers understanding that this is both necessary and technologically achievable. The public has wide acceptance. I do believe it’s a necessary step. Forty percent of our emissions are from transportation. And you look at the numbers, you have to drive this down dramatically in this relatively short time period. It is absolutely necessary.

What do you hope is next on climate?

Getting these things through that Biden has proposed. That’s the top of the list, actually trying to do as much as we can in Congress. I have opposed the filibuster. I think I was the first candidate to do that. I think the need for that reform is more imperative in our ability to do as much as we can. The president has outlined steps. We just need to get them done right now. Then you go to the second step. I don’t think the dreams of our second step should interfere with our first step that he’s already put on the table.

Do you see any hope in getting Republicans on board with this?

Any advice for Biden? You’re a veteran of both state and federal policy. Any lessons learned that you would impart to him?

I guess what I would say is I believe … wait, Bruce Reed [Biden’s deputy chief of staff] is calling right now.

[Inslee hangs up and then calls back after talking to Reed.]

My apologies, I hadn’t connected with Bruce, so I’m sorry to interrupt.

That’s intriguing that Reed would be calling you at this moment.

Does that mean that they’re seeking your advice on climate policy?

No, I was giving him some unsolicited advice [on infrastructure messaging].

Can you give me a sense of what you said to him?

I think the administration doesn’t need to be humble. They have really rung the bell on this. This has been a fantastic achievement, and it’s a tone. It’s just a tone.

How do you become less humble? How do you sell it?

They legitimately can claim how bold this plan is. It’s just a tone. I want to give license to be bold, just in how they talk about it.

The White House has faced blowback from some progressive groups for not proposing more climate spending. What would you say to them?

I would say that I am thrilled to have the president willing to do things at this scale, given the Congress that he has to work with. I believe he has scaled this with twin goals: One is to be as ambitious as possible, and two, don’t lose your followers.

When you’re in a bike race, you don’t want to be so ahead of your followers that you lose them. I think that he’s been attentive to both of these needs of leadership. If you look at successful presidents, they’ve been able to be both ambitious and keep the team, the peloton, together. I believe that he has been very sophisticated in his analysis of both, and you’re talking to a guy that’s been at this for two decades, as principal part of my life. In a world with a different Congress, you may have had some different proposals. Effective leadership needs to be reality-based.

How about the Sunrise Movement and other groups that have been asking for more ambitious climate action? How do you satisfy them?

It’s their job to always push. Nothing wrong with pushing. We need people to push; I wouldn’t ask anybody to pull any punches. It’s the job of advocacy groups to advocate in their direction. What I’d say is advocate in a way that’s going to keep the team effective.

This interview was lightly edited for brevity and clarity.