Inslee wants all cars to be carbon‑free. Can that be done? 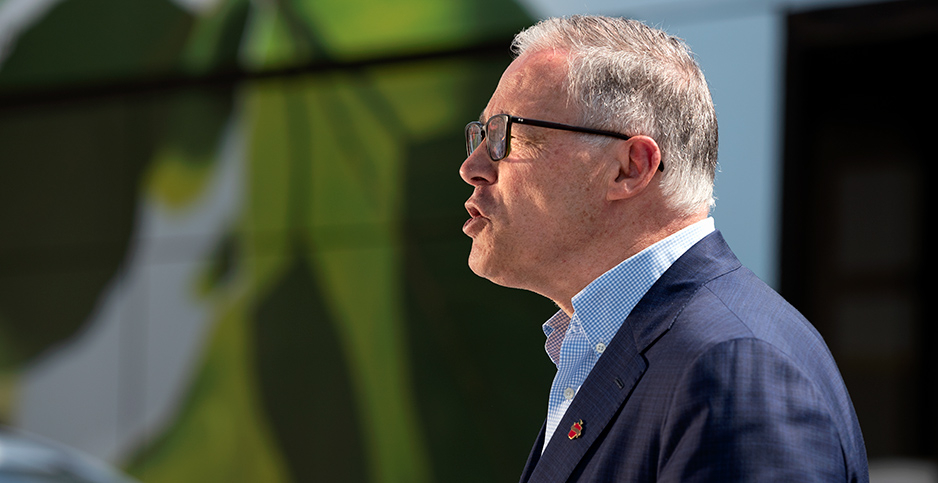 The Washington governor and self-styled climate change candidate last week released a plan mandating aggressive emissions reductions across all sectors of the economy. The plan includes a goal of 100% new zero-emission vehicles nationwide by 2030 (Climatewire, May 3).

The goal would not apply to older vehicles that have already been purchased. It would, however, require automakers to stop selling new light- and medium-duty cars, trucks and buses that run on gasoline. Car companies currently make the bulk of their profits from SUVs and other gas guzzlers.

At a climate event in San Francisco last week, Inslee was adamant that his ideas are achievable.

"We’ve got to build the rocket now, not just say we’ll go to the moon," he said.

But observers have questioned the political feasibility of the zero-emission vehicle goal. They note that automakers need several years to plan ahead for complying with new regulations and introducing new electric models.

That means automakers would have to start planning now for achieving the goal in 2030. That’s despite the fact that an Inslee presidency is far from assured. While the Washington governor has racked up praise from environmental groups and climate hawks, he has yet to poll above 2% in a major survey.

Don Anair, research and deputy director for the Clean Vehicles Program at the Union of Concerned Scientists, highlighted the importance of zero-emission vehicle goals, while recognizing the steep challenge Inslee’s proposal would pose

"Any serious assessment of the deep carbon emission reductions we need to address climate change shows that we need to transition our transportation system from fossil fuel-powered cars and trucks to electric vehicles," Anair said. "So a focus on moving toward zero-emission vehicles is really important."

But, he said, "obviously auto manufacturers have to plan ahead. And their product planning cycle can be five or six years before they bring a product to market. Keeping that in mind, if we were going to hit 100% zero-emission vehicles sold in 2030, that means automakers would need to start planning immediately for that future and move quickly. So it’s a big challenge."

Kate Larsen, who leads transportation research at the Rhodium Group, an economic consulting firm with a focus on climate policy, also praised Inslee’s goal while pointing to big obstacles.

Absent new federal policies, electric vehicles are expected to reach 17% to 35% of new light-duty vehicle sales by 2030, according to Rhodium Group modeling. Achieving Inslee’s goal would represent a dramatic acceleration of that trend, Larsen said.

It would also require a massive buildup of electric-vehicle charging infrastructure, Larsen said. While EV chargers are widespread in California and major cities, they remain sparse in other parts of the country.

To be sure, the Washington governor doesn’t view zero-emission vehicles as an end-all, be-all solution. His plan contains a raft of other ideas for decarbonizing the transportation sector, including a robust federal clean car standard; a nationwide clean fuels standard; expanded zero-emission vehicle tax credits; a "Clean Cars for Clunkers" program that would allow consumers to trade in old fuel-inefficient cars for new clean vehicles; and federal funding for state and local efforts to replace aging gas and diesel buses with electric buses.

The nationwide clean fuels standard would be aimed at reducing the carbon intensity of transportation fuels, including gas and diesel. That’s also a heavy lift.

California and Oregon are currently the only two states in the country with such a standard. And in Inslee’s backyard, a proposal to adopt a clean fuels standard recently died in the Washington Senate, despite the passage of other climate measures (Climatewire, May 1).

Vlad Gutman-Britten, state director with Climate Solutions, an environmental group with offices in Washington state and Oregon, said the clean fuels standard measure was unable to overcome a well-funded opposition campaign from the oil and gas industry.

"The oil industry went all out to defeat it," he said. "So we’re disappointed that they prevailed this time, and that the Legislature is sort of allowing them to maintain their monopoly control on transportation fuels. But we’re going to come back for it next year. They’re not going to prevail."

As for Inslee’s campaign overall, Gutman-Britten said he is encouraged to see a candidate focusing so much on climate change, despite his low polling numbers.

"I am encouraged that there is a possibility for real, serious policy discussions about decarbonizing our economy," he said. "I’m personally glad that there is a candidate pushing us in that direction. So the more, the merrier."