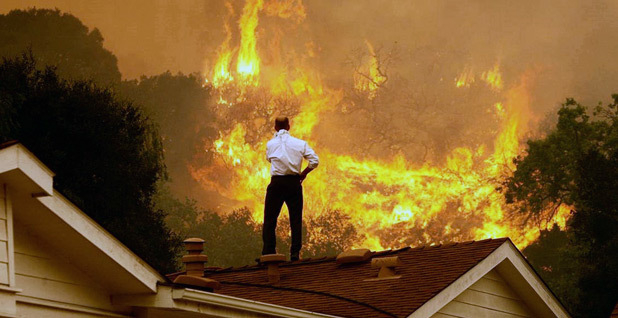 The announcement comes days after California Insurance Commissioner Dave Jones
signed an order making it easier for Californians to qualify for the state’s "plan of last resort."

The California Fair Access to Insurance Requirements Plan, known as the FAIR Plan,
provides basic property coverage for consumers who are unable to find coverage in the private insurance market, which often includes homeowners living in high-risk fire areas.

"The changes to the FAIR Plan included in this order will improve consumer access and the coverages available under the FAIR Plan," Jones said in a statement.

But some analysts fear that opening up the state-sanctioned insurance program undercuts the private market’s ability to address mounting climate threats that are fueling damaging wildfires. Moreover, they argue, it does nothing to discourage development in fire-prone areas.

Wildfire insurance is not a legal requirement for Californian homeowners, although some banks may require it in order to get a mortgage. Homeowners who do wish to protect their property must first try to get coverage from traditional insurers. In recent years, some underwriters have scaled back where they will insure homes. In 2007, for example, Allstate Corp.
stopped issuing new policies in California.

For the nearly 2 million households in California considered at high risk of fire, the next stop for trying to procure insurance is from surplus line insurers, who write specialty policies at premium prices. Between 2010 and 2014, the Surplus Line Association of California
reports the number of policies filed jumped 30 percent.

Writing plans ‘no one else will’

The last stop for coverage is the FAIR Plan. The program was created by the state Legislature in 1968 but is privately operated and not subsidized by taxpayers.

Considered a bare-bones plan, the new order steps up the level of coverage offered by the FAIR Plan to include optional coverage for the replacement of the contents of a building, as well as coverage for debris removal. The order also removes the requirement that consumers prove they were rejected three times for standard insurance before applying for coverage.

"That’s a huge deal," said Ian Adams,
senior fellow and Western region director of the conservative R Street Institute
. "By making the coverage in the FAIR Plan better and by making it the case that you don’t have to be denied by others, it’s effectively making it very, very difficult for private insurance companies to compete."

Jivan praised the changes and said eliminating the three denials policy was removing "an artificial barrier to entry."

She said FAIR Plan applicants often had trouble providing paper proof of coverage denial, and when they did, brokers weren’t looking at them closely anyway.

"We were inadvertently making it difficult," she said, adding that at every chance the FAIR Plan reminds policyholders that if they can get insurance with someone else, they should.

"We try really hard to get consumers to shop around," Jivan added. "We will write the plans no one else will."

But some see changes to the FAIR Plan as a bandage trying to fix a bullet hole of a problem.

As risk increases, the traditional insurance market either increases its prices or pulls out, leaving consumers to pay more or join the FAIR Plan.

"We’re seeing people having to increasingly rely on it because private insurance market is judging the risk to be too high. That’s not a good sign — it’s a wake-up call," said Rachel Cleetus,
lead economist and climate policy manager with the climate and energy program at the Union of Concerned Scientists.

"This is not a problem that is going to go away because the underlying risk will get worse in a hotter, drier climate," she said.

Insurers are increasingly aware of higher risks posed by a changing climate.

Steven Bowen
, associate director and meteorologist for insurance company Aon Benfield’s
Impact Forecasting division, said in recent years the insurance industry has had its eyes opening to the growing risk posed by climate change as evidenced by the uptick in insurance companies using computer simulations to map future risk from different extreme weather events, such as wildfires and floods.

The "catastrophe models" use weather prediction models, climate models, historical data and future simulations, as well as a host of other data, to paint a picture of where claims will be filed and where loss will be highest.

"They have become engrained in the daily lexicon of the insurance industry," Bowen said.

A September 2015 analysis by Impact Forecasting found California’s wildfire season, driven by the Butte and Valley fires, was the costliest since 2007.

$1B is just the beginning

The Valley and Butte fires, which killed six and destroyed more than 2,700 structures last September, are the third and seventh most damaging wildfires in the state’s history, respectively, according to data from the California Department of Forestry and Fire Protection.

To date, insurers report they have received 5,600 claims for residential and commercial structures, personal property, cars, and other items. So far, they have paid out more than $500 million and expect to pay an additional $500 million in anticipated future losses after all claims are received, processed and paid, the California Department of Insurance said.

The $1 billion figure does not include surplus insurance line claims or damage to public infrastructure such as roads and utilities.

"In the Valley and Butte fires, the sad thing is we saw a lot of people lose their livelihoods because they did not have insurance at all," Cleetus said. "There’s a lot of loss not being accounted for."

Changes to the FAIR Plan "address an immediate need," she said, but added that at some point public policy will need to step in to tackle growing development in wildfire-prone areas.

Mandating where people can live to mitigate risk is a tricky proposition, said Adams with the R Street Institute, but it could be the only way to reduce risk to both human life and loss, as well as the insurance industry.

"For people living off in the mountains in California, they’re going to get wrecked, and it’s not helping to them to keep them there on an artificially constructed plan which continues to put them in a hard position," he said. "I think [changes to the FAIR Plan] could encourage risky development."

The jury is out as to whether insurance companies alone could shift either the location or pace of development.

A 2014 white paper by research firm Headwaters Economics found insurance may not be the strongest tool in the market.

"While homeowner premiums may be higher in the WUI [wildland-urban interface], reflecting the higher wildfire risk, it appears unlikely that they are high enough currently to be an actual deterrent to development," the paper stated.

Homeowners and communities can take steps to reduce fire risk by fire-proofing homes, clearing brush and having water sources available, and some insurance companies are trying to incentivize those actions.

As it stands, she said, those actions don’t seem to be enough.

"We should view what’s happening in the insurance market as the canary in the coal mine," Cleetus said. "The risk is growing, and there are implications not just for California but other places that are wildfire-prone. It’s a good time to take stock of climate change as well as growing development."