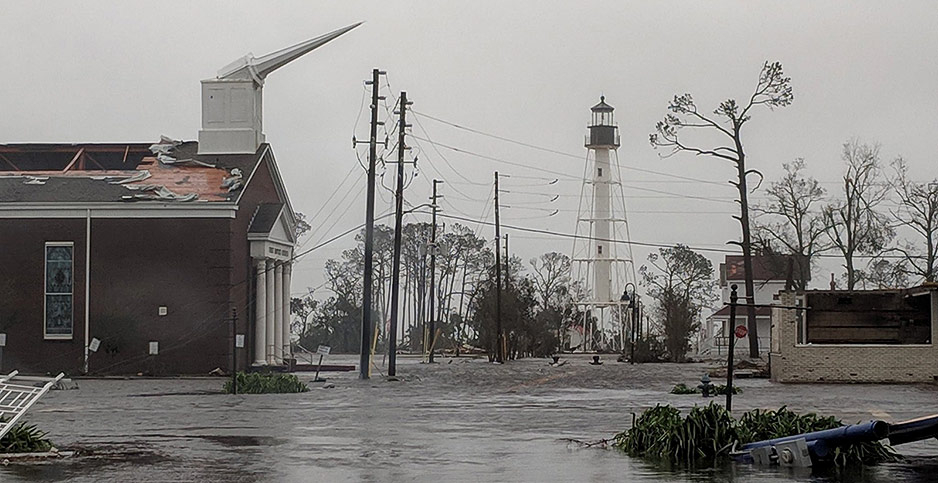 The streets of Port St. Joe, Fla., were flooded in the aftermath of 2018's Hurricane Michael. Douglas R. Clifford/TNS/Newscom

Taxpayers could be forced to spend billions of dollars to bail out the federal government’s flood program as private-sector insurers begin covering homes with little risk of flooding while clustering peril-prone properties in the indebted public program.

An E&E News review of state and federal records shows that insurance companies have escaped paying large claims after major hurricanes, like Michael, and are likely targeting homes that are profitable to insure. It comes as insurers are beginning to offer flood coverage for the first time in decades.

But analysts are concerned that if insurers target low-risk homes the public flood program could become a pool of the riskiest properties, pushing it deeper into debt and prompting more taxpayer bailouts. The federal program, which is supposed to be self-sustaining, received $16 billion from taxpayers in 2017 and now owes the federal Treasury $20.5 billion. Some lawmakers have proposed erasing it with a second taxpayer bailout.

Experts also fear that if the NFIP is financially weakened by insurance companies, the program could have insufficient money for vital tasks such as drawing flood maps and managing floodplains.

"Private-sector competition might increase the financial exposure and volatility of the NFIP as private markets will likely seek out policies that offer the greatest likelihood of profit," the Congressional Research Service said in May.

The starkest data comes from Florida, which has led the nation in encouraging insurance companies to write flood policies and has seen the number of private policies soar to 83,000 in September, from roughly 37,000 in June 2017.

Private-sector insurers provided 8% of the flood coverage in Florida in 2018, according to data compiled by the National Association of Insurance Commissioners.

Private coverage is especially prevalent on the Florida Panhandle, accounting for roughly half of the flood policies in two counties and more than a third in five counties, according to an analysis in 2018 by the University of Pennsylvania’s Wharton Risk Management and Decision Processes Center.

But after Hurricane Michael ravaged the panhandle in October 2018, private insurers paid only 3.8% of the flood claims, according to an E&E News analysis of state and federal records. The insurance companies paid 169 flood claims, worth $9.7 million, related to Michael, according to data published by the Florida Office of Insurance Regulation in October.

The NFIP paid 4,270 claims, worth $224 million, related to the Category 5 storm, according to the Federal Emergency Management Agency, which runs the program.

The small number of flood claims paid by private insurers in an area where they have a large presence suggests "there was some cherry-picking going on," said Robert Hunter, director of insurance at the Consumer Federation of America and the former Texas state insurance commissioner.

"The idea of private [flood] insurance would be to help spread the risk and get less taxpayer support. If they cherry-pick, they take the better risks away," Hunter said. "You end up with the federal government having all the terrible risks and taxpayers having to forever bear it."

Records from other hurricanes tell a similar story.

In Texas, where private-sector insurers provided about 11% of flood coverage in 2017, the companies paid only 6.3% of the claims from Hurricane Harvey, which dumped record rainfall on the Houston area in August 2017, state records show.

In Florida, private insurers paid 4.7% of the flood claims arising from Hurricane Irma in 2017 and 4.2% of the claims from Hurricane Matthew in 2016.

Alexis Bakofsky, a spokeswoman for the Florida Office of Insurance Regulation, said it’s premature to draw conclusions from a small number of flood events that occurred as the state’s private-sector flood market was expanding.

"The biggest takeaway is that consumer flood claims are being paid both from the private market and the NFIP," Bakofsky said.

Experts say insurance companies will gravitate toward lower-risk properties because they need to make a profit, unlike the government-run NFIP, which is required under federal law to insure any property no matter how bad its flood risk or flood history.

Insurance companies have succeeded in eking out a profit in recent years as they began writing flood policies decades after abandoning the coverage because it was too unpredictable and catastrophic. From 2016 through 2018, insurers had a 12% profit margin on their flood policies, according to records from the National Association of Insurance Commissioners. The NFIP, by contrast, had huge losses, the records show. The association does not have earlier data on private flood insurance.

If insurance companies pull a large number of low-risk properties away from the NFIP and the federal program becomes a high-risk pool, it will have to be restructured, Kousky said.

Many owners of the riskiest properties in the NFIP pay insurance premiums that are artificially low under a federal law aimed at protecting people who owned their homes before flood maps designated them as high-risk. The discounts have contributed to the NFIP’s huge losses in recent years — losses that will accelerate if high-risk, low-premium properties become concentrated in the program.

FEMA is counting on insurance companies to write more flood policies as the agency tries to double the number of homeowners with flood coverage by 2023. Property owners inside a high-risk flood zone and who have a federally backed mortgage are required to have flood insurance, though many people do not have the required policies.

"We want more people covered," FEMA’s deputy associate administrator for insurance and mitigation, David Maurstad, said in a recent interview. "In the last couple of years you see a few more companies getting involved on more of a regional level."

Maurstad said that despite the perception that NFIP policies are widely discounted, "there are a lot of our properties that are overpriced."

Officials hope the companies increase the overall number of people with flood coverage by providing options that are not available through the NFIP. Some insurers are drawing new customers through policies that provide more coverage than the NFIP, which pays a maximum of $350,000 for a flood claim. Others are providing benefits not offered by the NFIP, such as living expenses while a property is being repaired.

An increased number of people with flood coverage could help reduce flood damage by making homeowners more aware of their risk.

"There is a feedback mechanism in the insurance relationship with consumers. You really do start to get a better understanding of the risk when you’re forced to purchase insurance and see the reality of that," said Jonathan Bergner, head of public policy and federal affairs at the National Association of Mutual Insurance Companies.

The NFIP covers 5.1 million properties nationwide, including 3.5 million single-family homes and 1 million condominium units. Large percentages of homeowners in recent major floods did not have insurance and were forced to rely on federal disaster assistance, which pays a maximum of $34,900. That’s about one-tenth of the largest NFIP payment.

"Our biggest problem with flood insurance is that there’s not enough of it," said Jay Neal, president of the Federal Association for Insurance Reform, which advocates for affordable, broadly available insurance. "We need to have 40 million people insured for flood peril, not a little over 5 million."