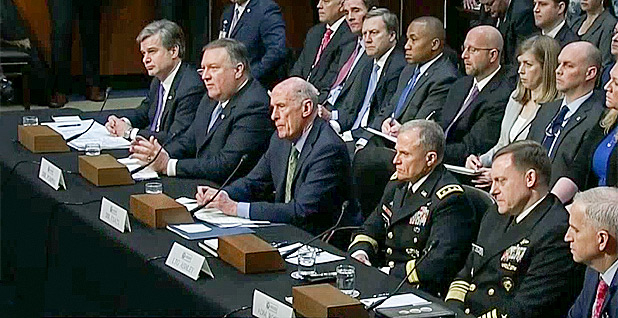 A top intelligence official took to Capitol Hill yesterday to quietly reiterate a dire warning about "abrupt climate change," a sharp rebuke to President Trump’s assertions on Twitter that the underlying science is a "hoax."

Director of National Intelligence Dan Coats in written testimony warned of the potential for "abrupt climate change," marking the first time the former Republican congressman from Indiana has used such loaded language in writing.

"The impacts of the long-term trends toward a warming climate, more air pollution, biodiversity loss, and water scarcity are likely to fuel economic and social discontent — and possibly upheaval — through 2018," he wrote.

Coats’ testimony said the past 115 years have been the warmest period in the history of modern civilization. He also asserted, based on intelligence information from as recently as Thursday, that climatic changes could result in far-reaching global disruption.

"Extreme weather events in a warmer world have the potential for greater impacts and can compound with other drivers to raise the risk of humanitarian disasters, conflict, water and food shortages, population migration, labor shortfalls, price shocks, and power outages. Research has not identified indicators of tipping points in climate-linked earth systems, suggesting a possibility of abrupt climate change," wrote Coats.

While it’s not the first time Coats or other Trump officials have raised the warning flag about the effects of a shifting climate, the testimony marks the first time a high-profile Trump intelligence official has used language mirroring that of the Obama administration.

In 2016, a memo from the National Intelligence Council concluded the "possibility of abrupt climate change cannot be discounted over any timeframe because research has not identified indicators to forecast potential tipping points and other thresholds."

That continuity is remarkable, said David Titley, a professor of practice in meteorology and founding director of the Center for Solutions to Weather and Climate Risk at Pennsylvania State University.

"It’s actually pretty amazing how impervious that piece of the bureaucracy is to either the exhortations or tweets of the guy who’s supposed to be in charge," said Titley, a former Navy rear admiral.

At the same time, the Pentagon has shied away from the issue in its latest planning documents. Mattis’ recently released National Defense Strategy — a broad document updated every 10 years to lay out DOD’s goals — doesn’t urge action against warming.

Still, in past congressional appearances, Mattis and Coats have repeatedly based their climate assertions on government-coordinated scientific reports, peer-reviewed literature and reports produced by the Intergovernmental Panel on Climate Change (IPCC).

Some of that perspective has played out in the administration’s policies. The Pentagon has not modified or eliminated the Obama-era directive that maps the military’s climate change adaptation.

And Titley gave the Trump administration credit for including $720 million for a new heavy icebreaker in its fiscal 2019 budget request, a step that failed to gain traction under Obama.

The Coast Guard operates just two icebreakers and has been asking for funding for a new vessel for years. Coast Guard leaders say the need is especially dire as ice melts in the Arctic, opening up new shipping lanes and territorial conflicts with Russia and other Arctic nations.

"That’s more than Obama did. Obama had eight years, and he farted around with it and never funded it," Titley said. "These guys finally funded it, so I’ll give him that. As much as it pains me, I have to give them credit for finally funding the icebreaker that we’ve known we’ve needed for over a decade."

But given there’s no statutory requirement for the White House to act on the intelligence community’s concerns, experts aren’t expecting much else from the Trump administration when it comes to addressing climate change.

Political and military leaders don’t like the implications warming has for their energy and economic policy, and are ignoring the security consequences because they don’t want to support the Paris climate accord or rein in emissions from coal power plants, said Andrew Holland, senior fellow for energy and climate at the American Security Project.

"It’s a very peculiar time we’re in for this. We don’t pay our intelligence and national security professionals to keep us safe from just the threats we’re afraid of, we pay them to keep us safe," Holland said. "They have to look at the whole spectrum of threats, even if it’s politically inconvenient."