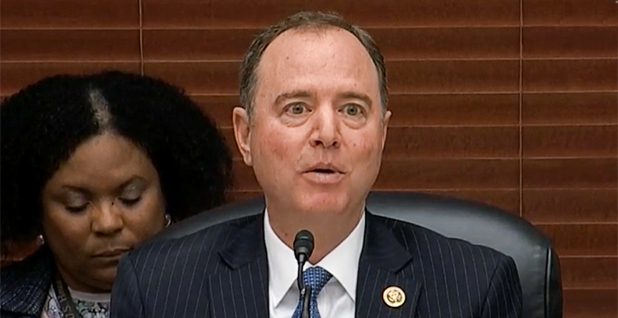 House Intelligence Chairman Adam Schiff (D-Calif.). His committee will be the latest this week to take up climate change. C-SPAN

The House Permanent Select Committee on Intelligence on Wednesday will meet on the national security implications of climate change, adding to the list of more than 10 House committees that have held hearings on the issue.

The hearing’s focus is broad, but lawmakers will hear from three witnesses from the intelligence community, where there is wide consensus about the threats climate change poses to U.S. interests abroad.

The Office of Naval Intelligence will send a witness, as will the National Intelligence Council. But the most breadth of expertise will likely come from Rod Schoonover, a senior analyst in the State Department’s Bureau of Intelligence and Research.

Schoonover is a scientist whose work focuses on the intersection of national security and environmental issues, and he teaches a class at Georgetown University on climate change as an adjunct professor.

The meeting also highlights the strategy Democrats have pursued with control of the House: Nearly every committee has found a slice of climate change to hold a hearing about.

The Intelligence panel is perhaps best known for the intense partisan disputes between Chairman Adam Schiff (D-Calif.) and ranking member Devin Nunes (R-Calif.) regarding President Trump and Russian interference in the 2016 election. The hearing Wednesday will reveal whether climate change sparks similar divides.

But the GOP side of the panel also has moderates such as Reps. Will Hurd of Texas and Elise Stefanik of New York, who was one of three Republicans to vote for a Democratic climate bill last month (Greenwire, May 2).

There’s little doubt, however, that there will be consensus among the witnesses from intelligence agencies.

The Trump administration’s National Intelligence Strategy contains a warning about the effects of climate change on resources and migration (Climatewire, Jan. 24).

And Director of National Intelligence Dan Coats has explicitly warned lawmakers multiple times about the possibility of "abrupt climate change" and potential instability caused by pollution and a warming planet.

"The impacts of the long-term trends toward a warming climate, more air pollution, biodiversity loss, and water scarcity are likely to fuel economic and social discontent — and possibly upheaval — through 2018," Coats wrote in written testimony last year.