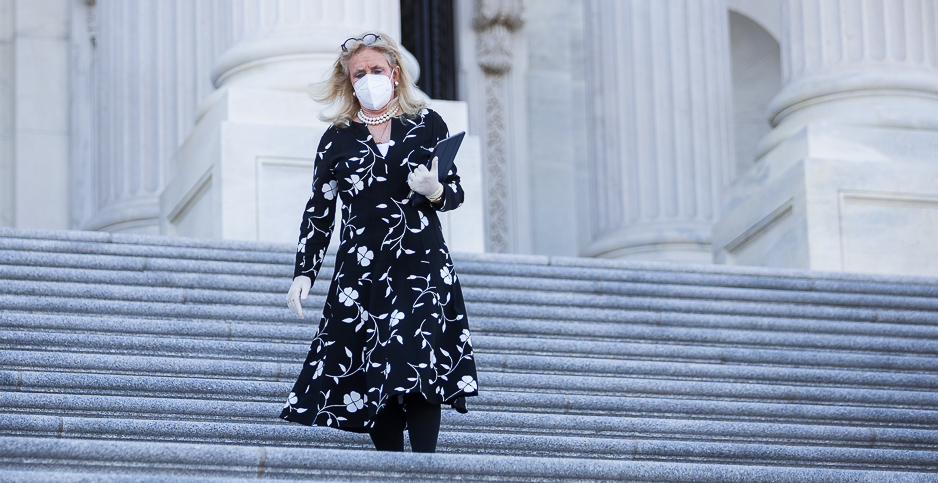 Rep. Debbie Dingell (D-Mich.) has been one of the leading lawmakers pushing for tougher rules for per- and polyfluoroalkyl substances, or PFAS. Francis Chung/E&E News

An effort on Capitol Hill to regulate toxic "forever chemicals" is pitting environmental groups against drinking and wastewater utilities that are worried Congress could leave them vulnerable to future lawsuits and high cleanup costs.

House lawmakers are eager to attach language to regulate per- and polyfluoroalkyl substances, or PFAS, to the 2021 National Defense Authorization Act. Policy experts say spending bills and water infrastructure legislation are also potential vehicles in the fall.

That legislative push has triggered an increase in lobbying efforts from companies that produce PFAS — as well as utilities looking to shape government oversight of the chemicals that have contaminated drinking water, soil and air across the United States. Studies have linked PFAS with multiple health issues such as thyroid problems and some cancers.

At the heart of the dispute, utilities are either voicing opposition to a flurry of PFAS bills or asking Congress for an exemption to protect themselves from future litigation. Environmental groups are countering by dismissing those concerns while pushing for stricter oversight.

"The uptick in lobbying corresponds with the uptick in the amount of attention Congress is giving to it," said Rik Hull, executive vice president of the National Association of Water Companies (NAWC), an association advocating on behalf of privately held water systems.

"We were working through the regulatory process, with EPA, and as soon as Congress gets involved, of course we’re going to start trying to educate Congress on our position," Hull said.

Lobbying disclosures show that two entities lobbied for water utilities relating to PFAS issues in 2018. In 2019, that number more than tripled to 14 organizations.

It’s unclear how much money went specifically into lobbying for PFAS, since federal law doesn’t require firms to break down spending to that level.

Water utilities, for example, have pushed for provisions in various spending bills for funds to install filtration systems or other cleanup costs for the chemicals.

While EPA is wrapping up its comment period on whether it will craft rules for two of the most studied PFAS, lawmakers are charging ahead with attaching provisions that would require EPA to set drinking water standards. Those two chemicals are perfluorooctanoic acid (PFOA) and perfluorooctane sulfonate (PFOS).

Lawmakers have argued for those provisions to be included in must-past measures because the agency is moving too slowly with setting standards for PFOA and PFOS.

Last month during a hearing, EPA Administrator Andrew Wheeler told senators the agency would need more than a year to set maximum contaminant levels for PFOA and PFOS (E&E News PM, May 20).

On Capitol Hill, utility opposition centers around language that would designate PFOA and PFOS as "hazardous substances" under the Comprehensive Environmental Response, Compensation and Liability Act of 1980, or CERCLA. That designation would initiate federal cleanup standards that water utilities would have to comply with.

The House passed H.R. 535, the "PFAS Action Act," with bipartisan support earlier this year. It included a hazardous designation for PFOA and PFOS, along with a host of PFAS provisions (Greenwire, Jan. 10).

A coalition of drinking water and wastewater utilities has argued that bill doesn’t go far enough to distinguish water systems as the recipients — not producers — of the chemicals. Utilities already investing in PFAS treatment could face additional costs and lawsuits under the bill, they say.

An E&E News review last year showed how chemical companies and other firms with ties to PFAS have also increased their lobbying (E&E Daily, July 24, 2019). One of their top targets is a hazardous designation.

In the Senate, Republicans and Democrats have coalesced around compromise language to set a drinking water standard for PFAS, but House Democrats say it’s not strong enough. Senators have rejected a hazardous designation (E&E Daily, April 27).

The Senate Armed Services Committee finished marking up its fiscal 2021 NDAA last night but has yet to release the legislation. The House panel will mark up is version later this month.

Industry and environmental groups are at odds over exactly how vulnerable water utilities are to PFAS litigation.

The debate surrounds whether water utilities could be ensnared in lawsuits by companies tasked with cleaning up PFAS.

Hull, for example, said his investor-owned members are treating PFAS that rise above EPA’s nonbinding health advisory levels of 70 parts per trillion by using filtration systems that can remove the chemicals from water such as granular activated carbon treatment.

But companies are concerned that disposing of solid waste or contaminated filters — even while using current best practices — could create "PFAS hot spots" and open them up to lawsuits under a blanket CERCLA designation, he said.

"There are a number of different entities that can bring suit under CERCLA to get cleanup," said Hull.

Whereas NAWC is fighting any CERCLA designation, public companies are taking a more nuanced approach and pushing lawmakers for a "limited carve-out" to exempt them from Superfund liability until EPA has finished its rule.

The National Association of Clean Water Agencies (NACWA), which represents public wastewater and stormwater agencies, is asking lawmakers for an exemption — but only until EPA issues its final rule and only for companies in full compliance with the Clean Water Act, said Nathan Gardner-Andrews, NACWA’s chief advocacy officer.

Gardner-Andrews noted that CERCLA is a strict liability statute and any facility found to have PFAS on-site — whether it generated the chemical or not — could face liability.

"I have no doubt that 3M and Dow Chemical and all of these big PFAS producers, they would do that in a heartbeat and have no problem going after municipal entities to try to get out of full liability for the chemicals," said Gardner-Andrews.

But Gardner-Andrews said he ran into opposition when speaking with Michigan Democratic Reps. Debbie Dingell’s and Dan Kildee’s offices about the importance of that limited exemption.

Those offices, he said, appeared to be in a "tough spot" given pushback from environmental groups to allow for any exemptions. Kildee co-chairs the bipartisan PFAS task force with Rep. Brian Fitzpatrick (R-Pa.). Dingell’s office did not respond to requests for comment.

Kildee criticized Senate Majority Leader Mitch McConnell (R-Ky.) for not picking up the "PFAS Action Act" in the Senate.

"The House has already acted earlier this year to pass the ‘PFAS Action Act’ with strong bipartisan support," he said. "Mitch McConnell and the Senate need to take up this bill without further delay to help clean up harmful PFAS chemicals."

"It was frustrating because I think there was a sense in talking to staff in those offices that they understood our position and agreed the target was not public utilities, that the goal never was to make public utilities liable for this," Gardner-Andrews said.

Environmental groups were also lobbying members to reject an exemption for water utilities, he said.

"That’s frustrating because there are different levels of responsibility for this chemical and who should be responsible for cleanup," Gardner-Andrews said.

But advocacy organizations like the Environmental Working Group argue it’s the utilities’ responsibility to filter out contaminants in drinking water and that it’s unlikely EPA will seek cleanup costs for PFAS contamination.

"It’s hard to imagine a scenario where a water utility would have to pay for the cost of cleanup of a Superfund site where the site has been designated because of PFAS contamination," said Scott Faber, EWG’s senior vice president for government affairs.

"Water utilities could use their power to help groups like EWG to provide clean water, and instead they’re using their power to frustrate those efforts because of a fear of future liabilities," he added.

Faber also said utilities could take a separate approach and focus their efforts on pushing Congress to amend the Clean Water Act to ensure industrial and commercial facilities aren’t releasing the toxic chemicals in the first place.

While NACWA was unsuccessful in getting the exemption in Dingell’s "PFAS Action Act," a carve-out would later be included for municipally owned airports, Gardner-Andrews said, as PFAS has been found in firefighting foam.

Lobbying records from 2019 show a surge from the airport industry, when lawmakers pushed for legislation pertaining to phasing out firefighting foam made with the chemicals and a hazardous designation for the entire class of PFAS, which could potentially subject airports to federal cleanup standards.

The largest organization for airport personnel that represents nearly 875 airports — the American Association of Airport Executives — spent more than $1.3 million in the fourth quarter of last year lobbying dozens of bills and policies, including 11 bills relating to PFAS and EPA’s Superfund program.

Exactly how big the cleanup tab will be — and who pays — is looming large over wastewater and drinking facilities caught up in the PFAS fight in Congress.

Public utilities are waiting on EPA to issue its final rule for PFOA and PFOS to better understand how they may be regulated and what technology is best to address the problem, said NACWA’s Gardner-Andrews.

"We haven’t come up with a dollar amount … but we have said, to the extent there are these very stringent mandates, that there needs to be some federal funding to help offset those costs," he said.

One challenge is that there’s no standardized testing protocol for PFAS, and specialized equipment needed to accurately test for the chemicals may already be contaminated and throw off results, he said. "That’s how ubiquitous these chemicals are," Gardner-Andrews said.

The class of "forever chemicals" ranges from 5,000 to 7,000 different substances.

One size doesn’t fit all

Groups representing smaller systems are calling on EPA to consider "affordability" and warning that low-income ratepayers could be overwhelmed with costs tied to cleanup.

Mike Keegan, an analyst for the National Rural Water Association, which represents more than 31,000 small and rural systems, wrote in an email that regulations for PFOS and PFOA will have a disproportionate impact on rural low-income households and EPA needs to explain how it decided to regulate the chemicals and provide an affordable option.

EPA should rely on nonregulatory federal initiatives — health advisory levels — to assist communities instead of regulating the chemicals, he said.

All states with widespread PFAS in public drinking water, Keegan noted, are in the process of adopting state policies to address the problem. Those states will likely have finalized their policies well before EPA can finalize its regulations.

Earlier this month, New Jersey set some of the toughest drinking water standards for the chemicals with 14 ppt for PFOA and 13 ppt for PFOS (E&E News PM, June 1).