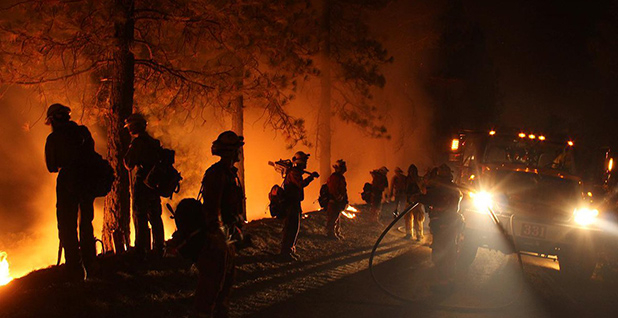 The Interior Department has set out a timeline for increased timber cuts and other "active management" of federal forests embraced by President Trump in December.

In a secretarial order, No. 3372, written on Jan. 2 — but posted only this week on the agency’s website — former Interior Secretary Ryan Zinke set out a series of deadlines to "identify and remove" environmental hurdles for forest management projects, identify salvage logging projects and begin other measures aimed at reducing wildfire risks. Jan. 2 was Zinke’s last day in office, during the partial government shutdown.

The five-page order details methods of forest management, including mowing, thinning, timber salvage and application of pesticides, that the Interior Department described as "supported by the best available science."

"The serious health risks, safety concerns, tragic loss of life, and economic losses resulting from catastrophic wildfire demonstrate the need for increased attention to active forestland, rangeland, watershed and wildfire management policies and techniques that reduce irreparable harm to landscapes and the citizens who live and work in neighboring communities," the department said in the order.

The Interior document suggests stepped-up logging in national parks, and it specifically mentions salvage logging in areas affected by wildfires, insect infestation and disease in 2017 and 2018. Salvage logging options are to be identified by March 31 in consultation with USDA, according to the order.

The ability of the Interior Department and USDA’s Forest Service to begin the projects envisioned in the order depends on appropriations from Congress, forest policy stakeholders say. The fiscal year beginning in October will be the first in which the Forest Service won’t be forced to raid non-fire-related accounts to cover fire suppression. But groups say they don’t expect much, if any, new money for forest management.

Still, groups such as the National Association of State Foresters have embraced the executive order, saying it could boost efforts to prevent catastrophic wildfire on federal, state and privately owned lands that exist side by side.

The Rocky Mountain Elk Foundation, which has a "strong partnership" with the Bureau of Land Management, endorses the department’s approach and has advised the agency that enhancement of early seral forest habitat to benefit elk and other wildlife is a priority, said the group’s director of government affairs, Mark Lambrecht.

The environmental group Defenders of Wildlife said the Interior order could put national parks at risk and questioned why the document was prepared during the shutdown, when government services aimed at public safety and health were supposed to be paramount.

"Protecting communities from wildfire is a consensus national priority, but this order illustrates how the Trump administration is heading in the wrong direction on this critical issue by ignoring climate change impacts and science-based solutions, while prioritizing an aggressive management agenda that is largely incompatible with the conservation of public lands, including with the missions of the National Wildlife Refuge System and the National Park System," Defenders of Wildlife said in a statement.

Hanson called the order a "major step backward" on management of federal forests. "This is not consistent with the science at all."