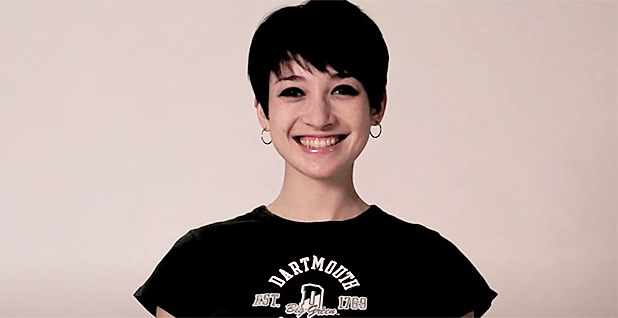 Marissa Knodel is the Biden administration's pick for adviser to the Bureau of Ocean Energy Management. Dartmouth/YouTube

As an environmental advocate on Capitol Hill and across the country, Marissa Knodel has argued that fossil fuels are better left in the ground and that the U.S. government should stop selling off new offshore drilling rights.

Now, as a new Biden administration adviser for the Bureau of Ocean Energy Management, she will help craft the agenda for the agency responsible for the offshore leasing program.

Knodel is one of several Interior Department political appointees and senior advisers announced last week who bring with them serious progressive credentials. Hers are rooted in activism urging the federal government to restrict development of oil and gas on public lands and waters.

Her job will be to carry the Interior secretary’s marching orders to BOEM leadership, but also to report back from staff and industry experts.

"I am excited, honored, and humbled to serve our country as part of the Biden-Harris administration at the Department of the Interior so we can Build Back Better for our climate, public lands and waters, wildlife, and workers," Knodel wrote on her LinkedIn page Thursday.

Green advocates familiar with Knodel’s environmental work say she is an ideal choice to advise BOEM as the U.S. pivots toward renewable energy. Many see her as proof that the Biden administration is serious about its pledges to take serious steps to face climate change.

Biden has promised to get the U.S. to net-zero emissions by midcentury and 100% clean power by 2035. He’s also said he would end new federal leasing and permitting, a move that would slowly phase out the government’s oil and gas program — a pledge that environmentalists embrace but some experts caution won’t be easily accomplished under existing law.

"I see it as affirmation that Biden is genuinely committed to addressing the climate crisis," Lara Levison, a senior federal policy director for Oceana, said of Knodel’s appointment.

Knodel’s appointment has stirred unease in some corners of the oil and gas sector, which is already piqued by recent actions of the new administration.

In less than a week, the Biden administration has paused oil and gas activity in the Arctic National Wildlife Refuge, rescinded a permit for the Keystone XL pipeline, and mandated all permits and leases for federal fossil fuel development go through Interior leadership for 60 days.

People in the oil and gas sector are bracing for more news to be released as soon as tomorrow, when the administration plans to issue more environmental executive orders — waiting to see if this could include a ban on new fossil fuel leases on public lands.

"Many doubted how aggressive President Biden would be on stopping America’s energy production," he said in a statement. "Here’s your proof. Sixty days will only be the beginning. A moratorium is simply a ban by another name."

‘Keep it in the ground’

Knodel grew up in Minnesota. She first got interested in environmental work in high school when she joined a campaign opposed to a tire burning facility proposed in her town, according to her profile on Earthjustice’s website.

A graduate of Yale University and Vermont Law School, Knodel joined Earthjustice in 2017, shortly after President Trump took office. Before Earthjustice, she worked on the climate and energy team for Friends of the Earth, once running the "Keep It in the Ground" campaign that tried to stop new federal oil and gas sales, including for the program she now will help manage.

She was not available for an interview for this story, and Interior did not provide answers to questions in time for publication.

"More fossil fuels from public lands and waters have already been leased to fossil fuel companies than can be extracted and burned if we are to avoid some of the worst impacts of climate change," she wrote.

Bound by the law

While Knodel may represent great changes for BOEM, she also is likely to find receptive collaborators at an agency that’s accustomed to political change, some said.

"The staff is going to treat her with the utmost professionalism," said a former BOEM staffer, characterizing the agency staff as "fair-minded" and dedicated to their work regardless of the administration in charge.

Knodel will work closely with longtime agency figures at the bureau’s headquarters in Virginia, like current acting Director Walter Cruickshank and renewables chief Jim Bennett. And she will liaise alongside congressional affairs staff to provide a political perspective.

Answering directly to the Interior secretary or the assistant secretary for land and minerals management, she’ll be a primary gatekeeper for the release of information, particularly early in the administration, such as Federal Register notices, regulations, press releases, records of decisions and memos.

And, of course, she will be part of carrying out what could be a big, transformational political agenda that is pro-renewables and focused on reducing fossil fuel reliance. But it won’t be simple, some said.

"Just because they want to permit for renewable energy doesn’t mean it can be arbitrarily done," a former Republican Interior political appointee said, adding that a rushed environmental review would land the administration in court. The appointee also characterized the campaign promises to end leasing or permitting as illegal. "Like all federal employees, she and her colleagues are going to be bound within the restrictions of the law."

For observers of the agency, Knodel represents a 180-degree turn from her predecessor at BOEM, James Schindler.

The Trump appointee was a former lawyer for libertarian think tank the Cato Institute. He also served as a legislative aide to former Louisiana Sen. David Vitter (R). Schindler kept a low profile compared with many other Trump appointees who ended up in the spotlight. But he worked closely on policy with Scott Angelle, the director of BOEM’s sister agency, the Bureau of Safety and Environmental Enforcement.

The two men shared a deep appreciation for the oil and gas sector’s contribution socially and economically to their shared home state of Louisiana and were proud that the Gulf of Mexico hit record production during the Trump era.

During Schindler’s tenure, BOEM held 11 oil and gas and renewable lease sales, rewrote air quality regulations for the Gulf, and rescinded an Obama-era guidance on financial assurance considered burdensome to the oil and gas sector. The administration also started, but never completed, a five-year offshore leasing plan that could have opened up more than 90% of federal waters to the oil and gas industry.

For green champions, Knodel would be a welcome rebuke to that vision of driving as much oil and gas development as possible.

Dustin Renaud, a spokesman for Healthy Gulf in New Orleans, said Knodel has been a "tireless advocate" for people in the Gulf, bringing issues affecting coastal communities to federal attention.

"We’re very happy to see her in this new role at BOEM," he said. "And we hope she continues to raise up front-line voices to advocate for a just transition to renewable energy."

She is "articulate, calm, perceptive," Levison said, calling her ideal for the role of carrying out Biden’s climate goals. "She’s the sort of person I would want to work with."