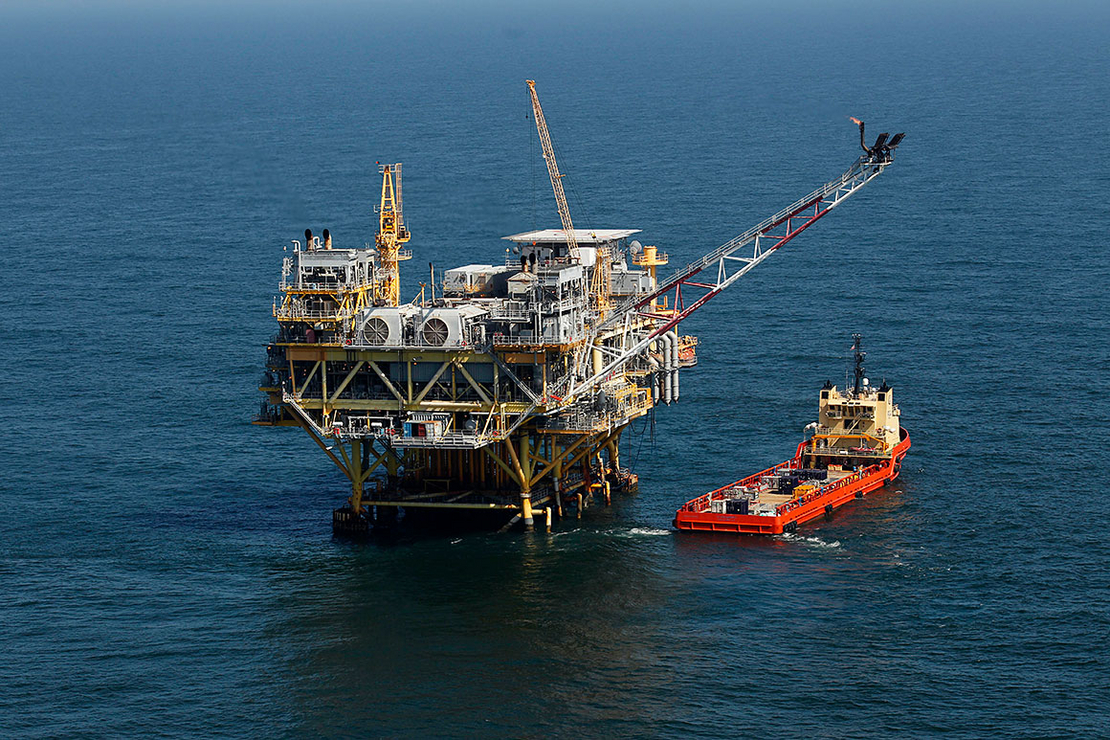 An offshore oil rig and supply vessel is pictured in the Gulf of Mexico off the cost of Louisiana in this April 10, 2011, file photo. AP Photo/Gerald Herbert

The Biden administration announced yesterday it will hold its first ever oil and gas lease sales this year, even as it continues to fight in court for its authority to suspend auctioning drilling rights to vast stores of fossil fuels on federal lands and waters.

The Department of Justice laid out its plan to hold lease sales in a brief filed last night in the U.S. District Court for the Western District of Louisiana, where Judge Terry Doughty had ordered the Biden administration to show it was complying with a June ruling requiring the federal leasing program to resume.

The announcement is the latest move in a fraught battle between the White House, Republican states and oil interests over the future of the federal oil and gas program overseen by the Interior Department.

“Interior immediately stated its intention to ‘comply with the decision.’ And complying with that decision is precisely what Interior has done,” wrote Todd Kim, assistant attorney general for DOJ’s Environment and Natural Resources Division, in the brief yesterday.

President Biden froze new oil and gas lease sales shortly after taking office as he ordered a review of the program and its climate impacts. The move prompted fierce opposition from Republican lawmakers, who said it would thin revenues and threaten industry jobs. A group of 13 red states filed suit to undo Biden’s freeze.

The Biden administration is appealing the June preliminary injunction from Doughty and maintains that the oil and gas leasing program is riddled with flaws (Energywire, Aug. 17).

In a statement last night, Interior said it "will continue to exercise the authority and discretion provided under law to conduct leasing in a manner that fulfills Interior’s legal responsibilities, including to take into account the programs’ documented deficiencies."

The agency said it would first move forward with a lease sale in the Gulf of Mexico, the largest offshore producing region in the country.

Interior said it will issue a record of decision for a sale in the Gulf by the end of the month, with a sale notice likely coming out in September. It will also begin consideration of quarterly lease sales, and weigh restrictions for lands proposed by industry, in the western United States, with sale notices coming out later this year.

Interior also announced it will begin a draft environmental review this fall for an auction to be held in Alaska’s Cook Inlet.

Despite Interior’s appeal, momentum appears to be building in favor of the Republican-led states in the Louisiana case. A federal magistrate recommended Monday that the red-state lawsuit against the Biden administration be allowed to advance — a positive signal to those opposed to Biden’s efforts to halt oil and gas leasing. The administration had asked the court to reject the lawsuit.

“We find that plaintiffs have sufficiently alleged facts demonstrating that the President acted in excess of his statutory or constitutional authority,” Magistrate Judge Kathleen Kay wrote Monday, adding they were entitled to a “judicial review” of the president’s actions.

She also said the challengers had shown a negative economic impact from the federal leasing pause. Parties to the lawsuit have two weeks to file objections before Doughty takes over to make a final decision on the Biden administration’s appeal.

The court case in Louisiana — as well as a lawsuit against the Biden administration brought by the Western Energy Alliance in Wyoming, and a third filed by a dozen energy trade groups led by the American Petroleum Institute — may provide some legal boundaries for what the Biden administration can do to curb federal drilling. Experts have pointed out that there are separate federal laws in place for both offshore and onshore oil and gas leasing.

"The brief filed today with the court appears to show progress, but the slow walk indicates one step forward and three steps back," she said.

“While we are glad that the Biden Administration has announced a resumption of offshore lease sales as it is legally obligated to do, the delay has been far too long and there are too many questions unanswered by today’s announcement," he said. "It also creates unnecessary confusion, inconsistency and uncertainty for America’s energy producers."

Environmental groups have criticized the Biden administration for acquiescing to the court order, arguing that the federal oil program must contend with the threat of climate change.

“The law is clear. Interior Secretary [Deb] Haaland has broad discretion to determine which lands — if any — are available for oil and gas leasing,” said Center for Western Priorities Policy Director Jesse Prentice-Dunn in a statement yesterday.

“Given the urgency of the climate crisis, and the well-documented shortcomings of the leasing system, she must ensure that any public land leases that are put up for auction fully account for the costs that our children and grandchildren will have to pay.”

Prentice-Dunn also called for the release of an interim report on reforming the federal oil and gas program. The Biden administration promised that the report would be ready in early summer but has withheld it for several weeks.

But while the climate impact of the federal oil program is at the heart of the court case, some have questioned how far the Biden White House will go in a politically bruising battle over the leasing stage of the national oil and gas program.

“A modest leasing program is not the real problem,” said Mark Squillace, a professor at the University of Colorado, Boulder, Law School, who served as special assistant to the solicitor at Interior during the Clinton administration. “Interior could offer a limited number of lease tracts, focusing on areas where significant development already exists and where environmental conflicts can be minimized, without exacerbating climate change in any significant way.”

He said: “Frankly, this is what they should have been doing all along.”