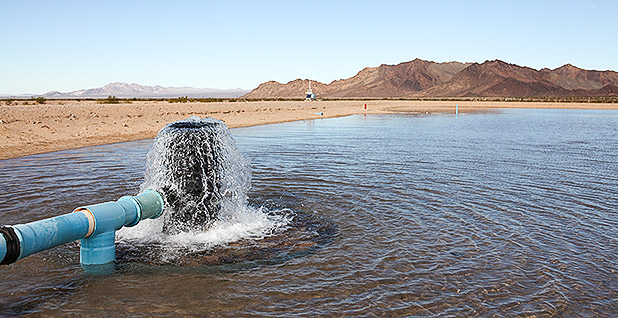 The Trump administration has cleared the way for a controversial project that would suck groundwater from under Southern California’s Mojave Desert and sell it to water providers.

On Friday, the Bureau of Land Management wrote that Cadiz Inc.’s plan to build a 43-mile pipeline along a railroad right of way did not require the agency’s approval.

The letter reverses the Obama administration’s opinion, which said in 2015 that the 1875 law governing the easement required that it be used for railroad purposes. Otherwise, it required federal approval.

BLM acting Director Michael Nedd wrote that the agency’s new legal opinion concludes that the owner of the right of way, the Arizona and California Railroad, may lease part of it for the pipeline.

"BLM determines," Nedd wrote, "that the ability to authorize the proposed uses of the easements obtained under the 1875 Act falls within the decision rights of the railroad … authorization by the BLM is unnecessary."

Cadiz owns about 34,000 acres along Route 66 in Southern California, making it one of the larger landowners in the area.

For years, it has hoped to pump groundwater and sell it to Southern California water providers. In 2008, it signed a 99-year lease with the railroad company to build the pipeline on its rail easement. Cadiz says it can provide a new water supply for about 400,000 people.

Environmentalists have sharply criticized the plan, contending that it would devastate the largely undisturbed desert ecosystem near Joshua Tree National Park. They cheered the Obama administration’s decision.

Cadiz became a flashpoint early in the Trump administration. The president’s pick for deputy Interior secretary, David Bernhardt, was partner for a firm that lobbied on Cadiz’s behalf. Bernhardt himself was not a registered lobbyist for the company.

The agency has said he has not been involved in any decisionmaking regarding the project since his confirmation.

And while Friday’s letter appears to remove the last federal hurdle, California appears to be taking a more active role in opposing the project.

In a Sept. 20 letter, Brian Bugsch, chief of the commission’s Land Management Division, said his staff has taken a new look at the project "owing to the recent renewed activity."

"This letter is a reminder that any use of state-owned lands under the Commission’s jurisdiction will require a lease from the Commission," Bugsch wrote.

Cadiz counters that the land in question is only a minor piece of the pipeline route and pointed out that the commission’s letter is a reversal.

"We are reviewing the letter sent by State Lands to determine ownership, as they have only sent us a letter about an earlier iteration of the project and without any evidence of ownership," said Courtney Degener, a spokeswoman for the company, "but from preliminary review the property in question is minor and not material to the completion of the Cadiz Water Project."

The Los Angeles-based company said in a statement that it is moving forward with the design phase of the project, as well as a conveyance agreement with the Metropolitan Water District of Southern California, the largest water provider in the state.

"Knowing a federal environmental review would expose the dangers of its project, Cadiz has waited years for an administration willing to greenlight its plans without any real oversight," the California Democrat said in a statement. "That gamble has clearly paid off."

"This latest decision by the Department of the Interior makes clear that the federal government is intent on rolling back environmental protections on public lands in the California desert," said Frazier Haney, the group’s conservation director. "It is clear that the State Lands Commission lease issue must be addressed before the Cadiz project can move forward."

BLM’s move is the latest Trump administration shift in effective support of the Cadiz project.

On Sept. 1, notably, the Interior solicitor’s office withdrew an Obama-era opinion and replaced it with a different conclusion concerning an 1875 law and railroad companies’ rights within their rights of way. The new 25-page solicitor’s opinion never mentioned the name "Cadiz," though the company had the most immediate stake in it.

Citing "further analysis of the general history and review of recent case law" concerning the 1875 law, the new solicitor’s opinion opened up rights of way to broader use.

The new legal opinion was hailed as progress by Cadiz. Opponents of the Cadiz plan, meanwhile, worry about the opinion’s reach.

The firm has made itself a player in federal decisionmaking, having spent a reported total of $730,000 on Washington, D.C.-based lobbying last year and $380,000 so far this year.

The firm’s leading lobbying firm is Brownstein Hyatt Farber Schreck LLP, Bernhardt’s former firm. The Western Values Project, a Montana-based environmental group, said it will be filing a Freedom of Information Act request "for any communications between Deputy Secretary Bernhardt and Cadiz, Inc. since his confirmation in July."

Bernhardt has promised to recuse himself from issues involving past clients when necessary.