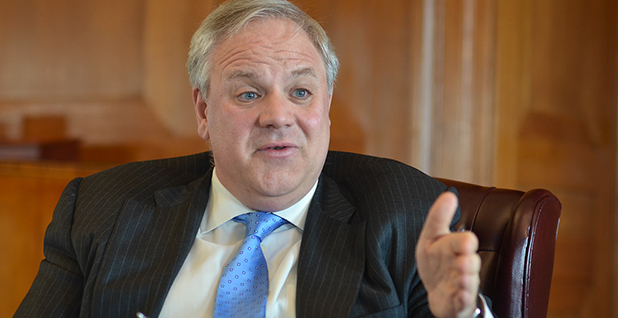 A final environmental review for America’s first major offshore wind project will be delayed, throwing its future into doubt.

Vineyard Wind, the project developer, has said that further delay from the Interior Department would jeopardize the future of its 800-megawatt project, which is proposed for federal waters 15 miles south of Martha’s Vineyard in Massachusetts.

In a statement announcing the delay this afternoon, Vineyard Wind said the project remained viable. "Even though today’s decision will delay development of American offshore wind projects, Vineyard Wind remains deeply committed to the emerging industry’s success. We firmly believe that once regulators are fully satisfied, our project and dozens [more] will deliver billions of dollars of new investments in ports, enhanced energy independence, and above all, high paying, long-term jobs for thousands of Americans."

Vineyard Wind has long been viewed as a bellwether for the offshore wind industry. It’s the first in a large pipeline of offshore wind projects proposed along the East Coast to reach the final stages of permitting. It has 84 turbines.

But it has encountered mounting challenges in recent months after NOAA Fisheries raised questions about the environmental impact statement conducted by the Bureau of Ocean Energy Management, a division of Interior.

Those concerns delayed the final report. That’s worrisome for project developers that are trying to qualify for the investment tax credit, a federal subsidy that expires this year. The company has also raised concerns that a delay could hinder its ability to meet its commitments with the state of Massachusetts. The state expects to receive energy beginning in 2022.

Interior did not immediately respond to a request for comment.