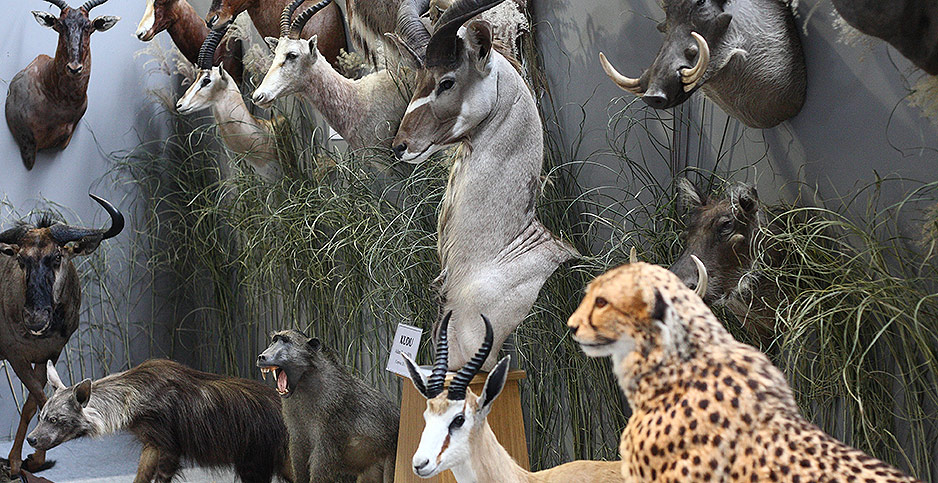 The Interior Department has disbanded an international hunting panel. Pictured here are animal trophies on display at a 2015 hunting and outdoor fair in Poland. Michal Fludra/NurPhoto/Sipa USA/Newscom

A controversial Interior Department pro-hunting panel has ended with a whimper instead of a bang.

In a remarkably anti-climactic conclusion to a heated clash over the costs and benefits of trophy hunting, the Justice Department disclosed in a legal filing Friday that Interior had let the International Wildlife Conservation Council expire.

"The Council will not meet or conduct any business again, it can no longer be renewed, and there [is] no plan to establish another committee with a similar mission or scope in the future," the Justice Department advised a federal judge.

The 16-member advisory panel "ceased to exist" on Dec. 21 because its authority expired and had not been renewed, according to the DOJ filing in the U.S. District Court for the Southern District of New York.

And though the advisory council had convened multiple times over its two-year existence, and summoned witnesses from this country and abroad, DOJ revealed that "ultimately, the IWCC did not vote on or make any recommendations or otherwise provide any advice or work product to [Interior]."

DOJ’s revelations came in response to a challenge from the Natural Resources Defense Council, the Center for Biological Diversity, Humane Society International and the Humane Society of the United States.

"I have little doubt our litigation spurred the administration’s decision to abandon the IWCC and walk away from its biased and un-transparent practices," Zak Smith, international wildlife conservation director for NRDC, said in a statement today.

Tanya Sanerib, international legal director at CBD, added today that "the end of Trump’s thrill-kill council is a huge victory for elephants, lions and other imperiled animals targeted by trophy hunters."

Former Interior Secretary Ryan Zinke established IWCC to promote public awareness of the myriad "benefits that result from U.S. citizens traveling to foreign nations to engage in hunting," according to Interior (Greenwire, Oct. 15, 2019).

The council convened five times, including meetings in Atlanta and Fort Worth, Texas. The last session was held last October, with scheduled presentations on topics including "The Challenges of Trophy Hunting Importing and Exporting" and "Finding Common Ground in Africa."

"As discussions surrounding many endangered species conservation efforts are typically fraught with emotion and given to hyperbole, IWCC leadership made incredible efforts to avoid presentations from those not living in or currently working in range states in order to avoid theoretical discussions not based on facts from credible sources," the summary stated.

It added that "several high ranking officials from African countries traveled to the US to address IWCC members in the hopes of helping to guide US policy to enhance both US and range states’ abilities to not only conserve natural resources more effectively, but to provide opportunities for workforce development and well-regulated commerce in their home nations."

Safari Club International CEO W. Laird Hamberlin said today that “after two years, the International Wildlife Conservation Council (IWCC) fulfilled its charter and completed its important work. The IWCC’s legacy is canonized for the benefit of the public and future conservationists."

Democracy Forward filed the lawsuit on behalf of the conservation groups, contending Interior violated the Federal Advisory Committee Act and the Administrative Procedure Act when it established IWCC.

Among other things, FACA requires advisory panels to be transparent, in the public interest, fairly balanced and shielded from undue special interest influence.

Last month, Interior spokesperson Melissa Brown decried what she termed a "frivolous lawsuit from frequent filers who aim to distract the Department from its mission" (Greenwire, Jan. 7).

In its filing Friday, DOJ asked the federal judge to declare the legal challenge moot "because the Council no longer exists and did not make any recommendations."