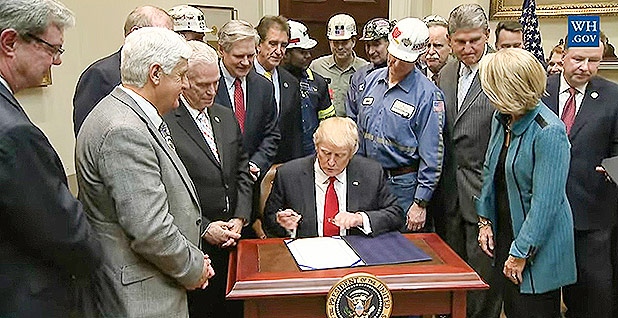 President Trump signing the Stream Protection Rule repeal surrounded by lawmakers and coal workers. The Interior Department used this picture in its blog post about the event. Photo by the White House, courtesy of the Department of the Interior.

The Interior Department on Friday removed a job loss estimate related to the now-defunct Stream Protection Rule from a blog post, saying it edited the text "for clarification."

The Feb. 21 post still hails the rule’s repeal as President Trump’s first step to make good on promises "to harness the power of American energy."

But it no longer suggests, as it did before, that the action prevented the loss of "7,000 clean coal jobs in 22 states."

The figure directly contradicted the Office of Surface Mining Reclamation and Enforcement’s analysis during the Obama administration that the rule, which enhanced water quality and monitoring requirements at coal mines, would actually create a few hundred jobs in reclamation.

Interior did not cite a source for the job loss estimate, but the 7,000 number mirrors information in preliminary documents leaked in 2011 (Greenwire, Nov. 16, 2016).

Coal companies and the National Mining Association have always estimated that job losses would be far higher if the Stream Protection Rule were implemented.

A 2015 NMA-backed study by consulting firm Ramboll Environ estimated as many as 77,000 coal mining jobs would be lost — a figured quoted by lawmakers after Trump signed their resolution repealing the rule.

A Washington Post fact checker today said the 77,000 estimate was "simply not credible" because it relied on a small sample of coal operators already vehemently opposed to the rule and outdated coal employment numbers.

NMA said its study was more accurate because it relied on "real-world analysis" versus the computer model used by OSMRE.

In a letter to the editor responding to The New York Times editorial board’s condemnation of the stream rule repeal, NMA President Hal Quinn said, "It takes more than predictable hyperbole and a quote from John Muir to explain away the scale of regulatory excess that is now being corrected."