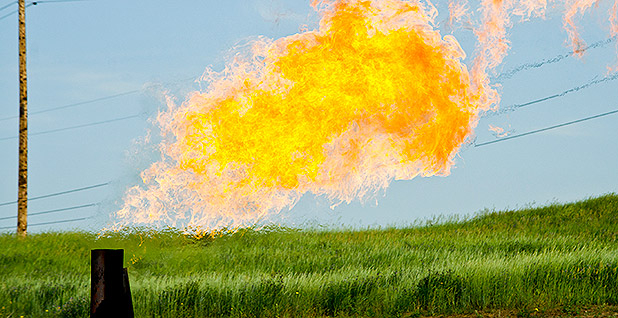 Repeal of the Bureau of Land Management's venting and flaring rule, which the Senate is expected to vote on this week, is just the first step by Republicans in Congress to reshape federal control of oil and gas activity on public lands. Photo by Tim Evanson, courtesy of Wikipedia.

Resolutions to kill a pair of signature Obama-era Interior regulations are just the tip of the iceberg for Republican lawmakers seeking to loosen the federal government’s grip on energy development on public lands.

The House has already passed two of those measures: to repeal the Bureau of Land Management’s methane and Planning 2.0 rules. A third, which would block a revision of the Office of Natural Resources Revenue’s (ONRR) mineral valuation rule, is expected to be introduced today by Rep. Scott Tipton (R-Colo.).

"Preventing oil and gas production was the Obama administration’s motive, and that’s why a lot of these rules were so flawed," said Jeff Small, executive director of the Western Caucus. "They were direct attacks on affordable energy."

The caucus is targeting 13 rules President Obama introduced during his last months in office. Not all of the regulations listed affect oil and gas operations, and some — like Planning 2.0 — are not specific to the industry, but affect oversight of productive uses of public lands.

Opponents of the rule repeals are sounding the alarm that Congress is conforming too closely to the oil industry’s demands.

"This campaign to destroy the Obama administration’s rational environmental protections only benefits the modern-day pirates who raid public lands for short-term profit and leave wastelands for the community to clean up. It’s incredible to me that after all this time, the Republican playbook is still limited to corporate cronyism, trickle-down economics and empty promises," Rep. Raúl Grijalva (D-Ariz.) said in an emailed statement.

The regulatory slim-down offers a lifeline for small producers who are struggling to continue to operate in a low-price environment, said Katie Brown, spokeswoman for the industry research group Energy In Depth.

"Many of these rules would dramatically decrease production on federal lands, hurting small producers the most," she said. "The venting and flaring rule, for instance, requires that even low-production wells — which have negligible emissions — install expensive technology."

It makes sense that the oil and gas industry would oppose the rules the Western Caucus has lined up for the guillotine, said Tyson Slocum, energy program director for the advocacy group Public Citizen.

"These rules establish basic minimum standards," he said. "Complying with that is going to add some costs. If you are in the energy business, you want to cut costs as much as possible."

But repealing regulations is unlikely to have more than a marginal impact on increasing federal mineral extraction, Slocum said.

"The driving force of domestic energy production is the market price of the commodity," he said.

While BLM’s venting and flaring requirements were known to be controversial, pushback against some of the rules on the caucus’s list is puzzling, said Alexandra Teitz, former counselor to BLM Director Neil Kornze.

"These rules are a series of actions to try and do a better job of overseeing oil and gas activities on public lands, and Congress is running roughshod over rules that were developed over years of work, through open public processes, with tens or hundreds of thousands of commenters," she said.

The items on the caucus list ensure that oil and gas production occurs in a safe, environmentally responsible manner, Teitz said. The rules do not constrain the quantity of hydrocarbons that can be withdrawn from federal tracts.

"Absent this truncated CRA process, these are not the types of rules Congress would normally get involved in," she said. "They’re just not that controversial, that costly."

ONRR valuation up next

The change, which was adopted after a five-year rulemaking process, provides a mechanism for calculating royalties that better reflects changes in the oil, gas and coal industries, according to a June 30 Interior news release. The government’s valuation regulations were last updated in the 1980s, the agency said.

Tipton’s resolution to kill the rule requires the support of a simple majority to pass the House and Senate.

"The Office of Natural Resources Revenue’s (ONRR) new rule ostensibly sought to simplify and clarify the process for valuing oil, gas, and coal production on federal and Indian lands in order to provide ‘certainty’ to industry and to ensure all royalties due to ONRR have been paid," the Western Caucus wrote. "In fact, it did the opposite."

Striking down the ONRR rule could allow producers to sell their minerals at an artificially low rate, circumventing their royalty obligations, according to RulesatRisk.org, a project by Public Citizen to oppose use of the CRA.

"The rule simply makes economic and environmental sense. It ensures that royalties are paid on the first arm’s-length transaction of a sale so that coal companies can no longer use their affiliates to dodge royalty payments," the website says. "Repealing the rule would cheat Americans out of a fair return for taxpayer-owned resources on public lands."

Also on deck is BLM’s Onshore Order 3, one of a series of rules the bureau crafted in response to a Government Accountability Office report finding that the agency’s system for measuring oil and gas production on public lands was inadequate.

The Western Caucus said the order would have "little to no measurable impact" on the accuracy of BLM’s accounting.

"The BLM tried to justify these extreme changes by claiming they needed to act to ensure the correct amount of royalty is paid to the U.S. government," the caucus wrote. "However, these changes will only decrease federal revenues by pushing production off federal lands."

Benefits of the measurement adjustment cut both ways, said Dylan Fuge, former counselor to Kornze. The correction ensures not only that the government collects the royalties it is due, but also that companies do not pay more than they owe.

"I know the oil and gas industry has expressed concerns about the costs," Fuge said. "We heard the concerns about costs. We responded to them directly" after the draft version of the order was released.

"I think if folks went back and took a careful look, they’ll see we addressed those concerns in the final rule," he added.

A third rule on the caucus’s wish list for repeal is the Fish and Wildlife Service’s Compensatory Mitigation Policy (CMP).

GOP legislators say the policy was born from an "overreaching" Obama administration memorandum directing agencies to set a net benefit, or at least a no-net-loss, goal for important, scarce or sensitive natural resources when possible.

The CMP creates "regulatory confusion" for many industries and activities on public lands, including energy production, the caucus wrote.

"All that we’ve learned about mitigation and conservation science in that time was put into this policy," she said.

The CMP allows for advanced mitigation planning that lets developers reduce impacts at a landscape level, rather than project by project. That approach is a key element of industry’s critique of Planning 2.0 (Energywire, Feb. 8).

By using CRA to eliminate the CMP, "we not only lose that consistency and clarity, we also lose the ability for the service to redo it," Umekubo said.

Will any CRA-eligible rules be spared?

Republicans in Congress appear to be ushering to the chopping block most rules Obama’s Interior passed after June 13, 2016, the cutoff date for use of the CRA.

The Western Caucus has also proposed repeal of the Bureau of Safety and Environmental Enforcement’s Arctic drilling rule, the National Park Service’s oil and gas rule, and FWS’s oil and gas refuge rule.

Small said caucus members support some of the last administration’s public lands rules but did not offer examples of which regulations he thought should stand. Because the clock runs out on CRA this spring, lawmakers have been laser-focused on the rules they can reverse, he said.

"Our members do support common-sense regulations that protect the environment, but there needs to be a balance. The Obama administration took it the other way," Small said. "Our members would like to see it get back to a balanced approach that still protects our communities and our citizens."

Legal experts have questioned the extent to which the government could revisit regulations CRA is being used to scrap (Energywire, Feb. 1). The act provides that an agency cannot reintroduce a rule in "substantially the same form."

That won’t be a problem, since reissuing laws should be the job of Congress — not the administration, Small said.

"If there’s a need for a new rule or a new regulation or for this process to be more clear, Congress can pass a law and set parameters and define how this process should work," he said. "We’re not fearful at all that utilization of the CRA would affect any type of balance in the future."

Use of the CRA seems to turn on its head conventional understanding that future administrations will take a second look at rules passed by their predecessors, said Alan Rowsome, the Wilderness Society’s senior director of government relations for lands.

"It’s an extensive list," he said. "It would say a lot about the oil and gas industry’s ability to wield power over the congressional schedule if the House and Senate are prepared to use a significant amount of time and taxpayer dollars to go through each and every one of these Congressional Review Act issues."

The Senate could vote on BLM’s methane and Planning 2.0 regulations this week.