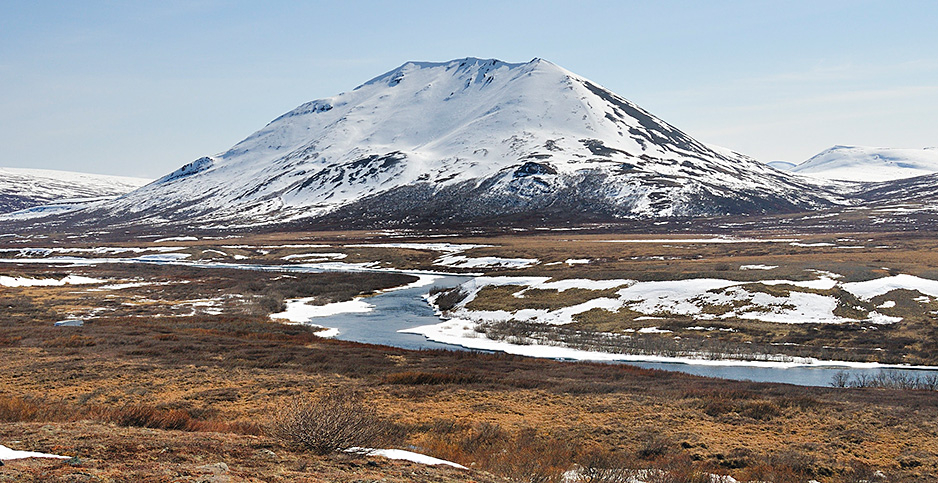 The Interior Department is pausing a Trump-era order that would have opened up millions of acres in Alaska to mineral development, including on the Seward Peninsula. DCSL/Flickr

The Interior Department today tapped the brakes on a last-minute series of Trump administration orders that proposed to open as much as 28 million acres of federal lands in Alaska to mining and other mineral extraction activities.

The lands at issue were included in five draft public lands orders signed by former Interior Secretary David Bernhardt in January during the final two weeks of the Trump presidency.

Only one of the five public lands orders was published in the Federal Register, on Jan. 19. It covered 9.7 million acres west of the National Petroleum Reserve-Alaska along the Arctic Ocean, and would have been opened to mining and oil and gas development on Monday, April 19 (Greenwire, Feb. 17).

The other four orders signed by Bernhardt on Jan. 15 and 16 "were never published in the Federal Register and have no effective date," Interior said.

The notice of the two-year delay — keeping protections in place for the 28 million acres in all five orders through April 16, 2023 — will be published in tomorrow’s Federal Register.

During that period, the Bureau of Land Management "will work to correct defects associated with initial analysis under the National Environmental Policy Act, including inadequate review of potential impacts on subsistence hunting and fishing," Interior said today in a press release.

"As part of the supplemental review, the BLM will engage the public and hold Tribal consultations," it added.

The announcement pleased the Norton Bay Inter-Tribal Watershed Council, which has expressed concerns about the potential for mining pollution affecting that area’s salmon runs.

"The effects of warming temperatures are already killing fish in the North and Golsovia Rivers that we rely on for fishing. If mining also takes place at the head of these rivers it will turn them into dead zones," Doug Katchatag, the council’s president, said today in a statement.

"We applaud BLM for showing understanding and cooperation in the conservation and protections of our subsistence resources that the previous administration did not," Oliver said.

The delay is likely to rile Alaska’s congressional delegation, which has already expressed concerns about the Biden administration’s temporary freeze on new oil and gas leasing on federal lands.

The National Mining Association questioned the need for the delay.

"Our nation’s supply chains are already vulnerable due to our heavy dependency on foreign sources for the minerals required for our manufacturing, energy, defense and technology supply chains," Burke said. "Our import dependence continues to grow because of unwise and unnecessary withdrawals, even as demands for minerals are increasing exponentially to meet the needs of future energy technologies such as electric vehicles, as well as renewable and battery technologies."

She added, "We should be doing more to support mining in the U.S., where it is done according to the strictest environmental standards and creates stable, high-paying jobs, at a time when our economy desperately needs them."

Jess Szymanski, a spokesperson for the American Petroleum Institute, urged the Biden administration "to listen to the majority of Alaskans who support energy development and want the opportunity to develop these important energy resources domestically. At a time when the nation needs an economic recovery, this delay only serves to withhold the good-paying jobs and economic revenue that safe and responsible oil and gas development would provide to local Alaskan communities."

Much of the lands at issue were withdrawn decades ago from new mining claims and oil and gas leasing through the Alaska Native Claims Settlement Act in 1971. The law set aside large swaths of the state for conservation and other land use classifications (Greenwire, Jan. 19).

BLM’s Alaska State Director Chad Padgett said at the time Bernhardt signed the order covering nearly 10 million acres that rescinding the mineral withdrawals aligned with the Trump administration’s "priority of being a good neighbor." It also complied with the 2008 Kobuk-Seward Peninsula resource management plan for the area west of the National Petroleum Reserve-Alaska, he said.

But the orders Bernhardt signed on the way out contain potentially significant "defects," Interior said.

Among them is the Trump administration’s "failure to secure consent from the Department of Defense with regard to lands withdrawn for defense purposes," as required by the Federal Land Policy and Management Act.

In addition, there was "insufficient analysis under the National Environmental Policy Act, including failure to adequately analyze potential impacts on subsistence hunting and fishing, and reliance on outdated data in environmental impact statements prepared in 2006 and 2007," according to an advance notice in today’s Federal Register.

Interior will also review the Trump BLM’s "failure to comply with Section 106 of the National Historic Preservation Act," and "possible failure to adequately evaluate impacts" to species protected by the Endangered Species Act, according to the notice signed by Laura Daniel Davis, Interior’s principal deputy assistant secretary for land and minerals management.