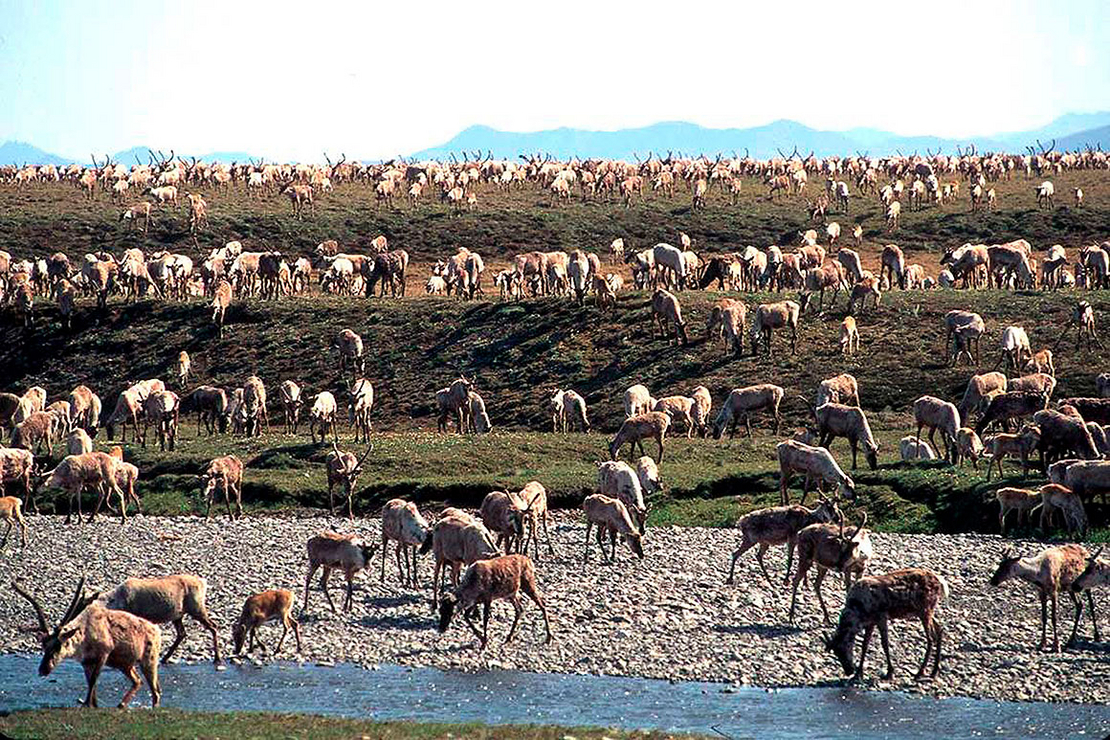 Caribou from the Porcupine herd migrate onto the coastal plain of the Arctic National Wildlife Refuge in northeast Alaska. Fish and Wildlife Service/AP Photo

The Interior Department today said it will restart an environmental review of the Arctic National Wildlife Refuge’s oil and gas program, following its determination earlier this year that the Trump administration’s assessment was flawed.

This supplement to the original environmental impact statement will consider the effects of a drilling program in the refuge’s 1.6-million-acre coastal plain.

Interior will explore new alternatives, such as reserving some areas of the coastal plain as off-limits to drilling, prohibiting surface disturbance in sensitive areas, and how to “otherwise avoid or mitigate impacts from oil and gas activities,” according to an Interior notice published in the Federal Register.

Officials anticipate a draft of the supplemental review taking six to eight months to complete, following an initial scoping period for public input.

This move from the Biden administration was not unexpected, as Interior Secretary Deb Haaland in June suspended more than a dozen ANWR oil and gas leases that had been sold in the final days of the Trump administration. She said that the suspension was a response to “flaws” identified in the original environmental review and that an additional look at the program — the one announced today — would need to take place (E&E News PM, June 1).

In 2017, the Republican-led Congress mandated an oil and gas program in the refuge through a rider in the tax overhaul. The congressional mandate answered Alaska’s decadeslong push to open the refuge to drilling and overturned the equally long opposition from Democrats, conservation groups and some Alaska Natives.

But the Trump administration delayed holding the first sale until weeks before leaving office this year. And the Biden administration immediately prohibited further oil and gas activity upon taking office, leaving those leases in limbo.

Environmental groups, which had accused the Trump administration of a rushed environmental review process that didn’t fully take into account the harm to the sensitive Arctic ecosystem and wildlife, applauded today’s announcement.

“As we continue to face a worsening climate crisis, there is no place for the rushed, inadequate Arctic Refuge oil and gas plan finalized under the previous administration,” said Kristen Miller, acting executive director of the Alaska Wilderness League, in a statement.

Miller added that the Biden administration should act to cancel the oil and gas leases already sold and urged Congress to repeal the ANWR oil and gas program, which mandates at least one more lease sale.

The Sovereign Iñupiat for a Living Arctic, a group representing some Alaska Natives, also stressed that today was only a first step to shielding the refuge from a drilling program in the future.

“We look to our representatives in Congress to now step up and do their share of the work in protecting this land that provides for Iñupiat and Gwich’in communities,” they said.

Experts say the Biden administration’s review could weigh the climate impacts of an ANWR drilling program as far more serious than the original review, particularly in the Arctic, where experts say warming is happening at three times the global rate.