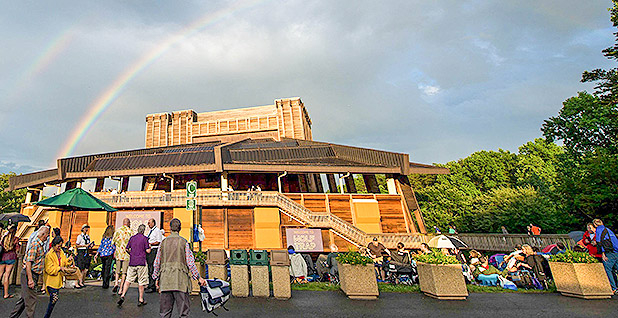 Each year, the Interior secretary gets eight tickets for every event at the Wolf Trap National Park for the Performing Arts in Vienna, Va. @Wolf_Trap/Twitter

Free reserved parking will still be allowed, but complimentary food and drinks are out for top Interior Department officials using the agency’s free tickets to rock concerts at the Wolf Trap National Park for the Performing Arts in Vienna, Va.

Those rules are just part of a new package of guidelines drawn up by the Interior secretary’s chief of staff Todd Willens, allowing Interior employees to use eight free tickets the department receives for each Wolf Trap performance, so long as they’re used for "authorized purposes."

The directive comes after Interior and the Wolf Trap Foundation for the Performing Arts signed a new 20-year contract April 30, obtained by E&E News, that once again included the free concert tickets, despite concerns about the perk expressed by the agency’s own nonpartisan inspector general (Greenwire, May 3). The IG said the free tickets raised "ethical concerns" and should be reviewed.

Per the new orders issued Monday, Interior officials can use the tickets to host guests at events, such as members of Congress or the executive branch, potential private donors or reporters.

In some cases, the tickets can be used for official site visits or inspections or to honor awards and recognition for work done by Interior employees.

The restrictions were approved after an ethics review and legal opinion that determined the tickets are government property and may be used for "statutorily authorized purposes and activities."

Willens’ issuance of the guidelines marked one of his first acts as the permanent chief of staff for Interior Secretary David Bernhardt. Willens, who had been filling the job in a temporary role, received his new assignment Friday (Greenwire, May 17).

The new guidelines attempt to satisfy questions the IG raised in September.

Though department officials have accepted the tickets as a free perk for more than four decades, the IG suggested reviewing the practice. At the time, then-Interior Secretary Ryan Zinke had received tickets for eight box seats for each performance, valued at more than $43,000 a year.

Interior opted to keep the tickets when it signed the new contract with the nonprofit foundation that operates the 117-acre park. The park hosts more than 100 outdoor performances every summer, including musical stars such as Ringo Starr, Sting, Tony Bennett and Lenny Kravitz in this year’s lineup.

Shortly after the new contract was signed, Nancy DiPaolo, director of external affairs for the IG’s office, said Interior and the National Park Service had still not established written procedures for the disbursement and use of the tickets.

"Our concerns will be resolved when NPS develops a transparent, accountable policy and practice for the handling of the tickets," she told E&E News at the time.

The IG’s office declined to comment on the new guidelines.

"We haven’t received the memo yet," DiPaolo said last night.

Unlike prior years, Interior employees now cannot accept "drinks and light appetizers" that are made available to VIP guests at Wolf Trap’s Encore Circle Lounge, both before and after each performance.

Interior employees must also ask for tickets in writing, submitting their requests to one of three employees designated as a "Wolf Trap ticket coordinator."

Employees chosen to use the tickets will be notified at least three days in advance of a performance by Bernhardt’s office, but the office will be allowed to cancel any granted request up to noon on the day of the performance.

The free tickets have been a long-standing issue for Interior. In 1979, the IG first criticized the arrangement, saying the department "would be better served by strictly prohibiting free tickets."

In its report last year, the IG said the eight free tickets were valued at $543 combined for each event. The $43,000 total value was calculated based on 80 events per year.