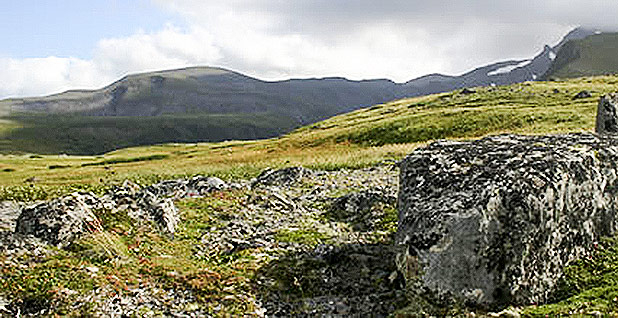 The Interior Department has agreed to a proposal that would allow a road to be built in Izembek National Wildlife Refuge in Alaska. U.S. Fish & Wildlife Service

The Interior Department has agreed to a proposal to exchange parcels owned by an Alaskan tribal corporation for lands within the Izembek National Wildlife Refuge that would be used to route a controversial gravel road through a wilderness area.

The agreement, which was first reported over the weekend by The Washington Post, has not been finalized. It is expected to be formally signed by Interior Secretary Ryan Zinke and the president of the King Cove Corp. in Washington later this month, the paper reported.

Proponents of the road have long argued it is desperately needed to provide the residents of King Cove with reliable access to medical care. Residents there currently must either ride an airplane or take a boat across a choppy bay to reach an all-weather airport in Cold Bay that can transport them to a hospital in Anchorage.

Interior and King Cove Corp. officials have been working on a land-swap deal for months, according to documents obtained by Defenders of Wildlife in a series of Freedom of Information Act requests to the Fish and Wildlife Service in July and August.

The land swap could entail exchanging about 2,604 acres of land owned by the tribal corporation for an undisclosed number of acres of federal land needed to route the road through the wildlife refuge and connect the towns of King Cove and Cold Bay, the documents showed.

Representatives with Interior did not respond to a request for comment on this story in time for publication.

But conservation groups slammed news of an agreement. They have long argued that a road through the refuge would threaten 98 percent of Pacific black brants and nearly all the world’s emperor geese, which depend on Izembek’s eelgrass beds to nest, rest and feed.

"Izembek supports an astounding number of waterfowl," Nils Warnock, Audubon Alaska’s executive director, said in a statement. "Birds like the Emperor Goose, Brant, and Steller’s Eider rely on Izembek’s vast eelgrass beds where they can go through molt, feed, and fatten up for migration undisturbed by humans."

A representative with the Wilderness Society said the group is preparing to challenge any land exchange in federal court.

"This appalling move by the Trump administration is the result of a backroom deal that kept the public completely in the dark and ignores the Interior Department’s science-based conclusions against the road," Nicole Whittington-Evans, the Wilderness Society’s Alaska regional director, said in a statement.

"The administration does not have the legal authority to take this action, and we will challenge them in court to ensure this irreplaceable wilderness area remains intact," she added.

House Democrats have also questioned whether Zinke has the authority to independently pursue a land exchange within the refuge (E&E Daily, Oct. 20, 2017).

The land exchange was included in the Omnibus Public Land Management Act of 2009, pending review and approval by the Interior secretary.

But then-Interior Secretary Sally Jewell rejected the land exchange and the Izembek road in 2013 because she said they would fragment a crucial wetland and tarnish a formally designated wilderness area within the refuge.

The documents obtained by Defenders describe a "push" for the land exchange that originates from Zinke’s office.

Indeed, Zinke has made the land exchange a priority, according to the documents. Defenders pointed to a "Top 10 U.S. Fish and Wildlife Service Priorities" document that ranks the Izembek land exchange at No. 4 on the list.

Interior directed FWS to explore "an administrative land exchange," and in June, the service granted the Alaska Department of Transportation a special-use permit to conduct surveys "for road routes" in the refuge, the documents show.

News that a land swap has been agreed to comes nearly six months after the House approved H.R. 218, sponsored by Rep. Don Young (R-Alaska), which would authorize the exchange of state land for 206 acres of federal land needed for the road (Greenwire, July 20, 2017).

Murkowski, who has long advocated for the Izembek road as a public safety issue for the residents of King Cove, could not be reached for comment.