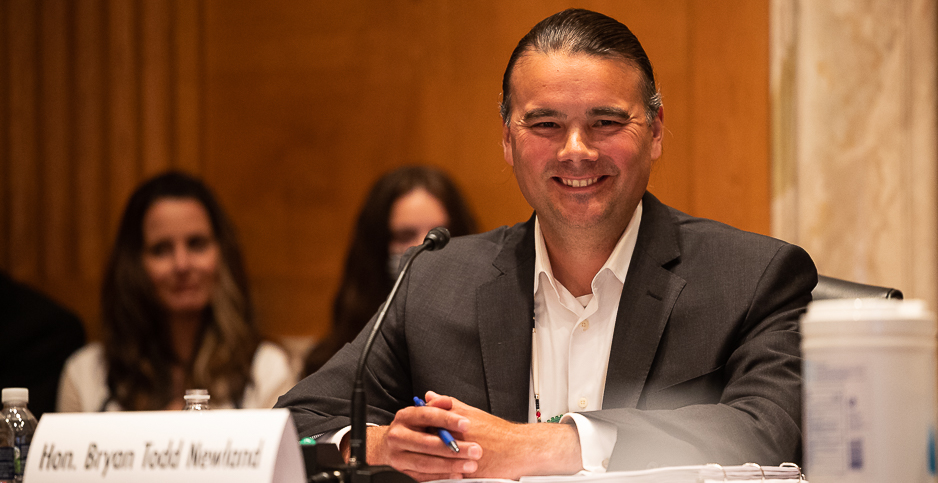 The Interior Department today outlined improvements in the Bureau of Indian Affairs’ long-challenged detention program, which holds several thousand inmates under conditions that have been called both overcrowded and potentially dangerous.

“We’re working to reform the correction system in Indian country so that we can protect the rights, dignity and safety of those who are in our custody,” Assistant Secretary for Indian Affairs Bryan Newland told reporters.

Newland also responded to criticism that Interior tapped the Cruzan Group, a consultant firm led by a former agency law enforcement leader, to conduct a review of the program.

Interior last year hired a small, newly established consulting group founded by the former head of Interior’s Office of Law Enforcement and Security, Darren Cruzan, to conduct an outside review of the detention program. As the department’s top law enforcement officer between 2017 and 2019, Cruzan had oversight of BIA’s detention program. Before that, he headed BIA law enforcement for seven years (Greenwire, Feb. 10).

“I understand the scrutiny it’s receiving,” Newland said. “As a political appointee, I don’t get involved in procurement decisions. But I do work to make sure that our process is ethical and fair. I intend to make sure this contract was awarded in an ethical and fair manner and that it adhered to law and regulation.”

An investigation published in June by National Public Radio and the Mountain West News Bureau found what it called “a pattern of neglect and misconduct that led to inmate deaths at tribal detention centers overseen by the Interior Department’s Bureau of Indian Affairs” and identified “at least 19 men and women” who have died since 2016.

NPR this month also raised questions about the hiring of the Cruzan Group to look at these problems.

The reform program outlined by Newland includes 28 items, including improving the process for conducting cell checks and responding to medical emergencies, improving recruitment, retention, training and morale of staff and improving coordination with other federal agencies like the Indian Health Service.

“We value the well-being of people, those in our custody as well as our officers responsible for providing a safe and rehabilitative environment,” Newland said, noting that he is the son of a corrections officer.

Newland and Interior Secretary Deb Haaland spoke with reporters prior to meeting with the National Congress of American Indians’ Executive Council. Haaland focused on the Biden administration’s work on behalf in tribal issues, including more funding and increased consultations.

“This has been a big first year,” Haaland said.

“The decline in the Indian country jail population can be attributed mainly to the COVID-19 pandemic,” the analysts stated.

The challenges facing the BIA detention program have long been apparent and have invited myriad responses.

In a 2016 evaluation, Interior’s Office of Inspector General reported that there were some improvements but also “serious incidents at the detention facilities, including attempted suicide, escapes, and in-custody deaths,” that were not always reported in the department’s centralized system. Data that did exist was unreliable.

“In addition, the BIA had not completed required annual health and safety inspections in the prior 3 years at 17 of the 26 facilities we visited,” the OIG noted, adding that “facility maintenance needs were at risk of going unaddressed [and] overcrowding and staffing were problems at some facilities.”