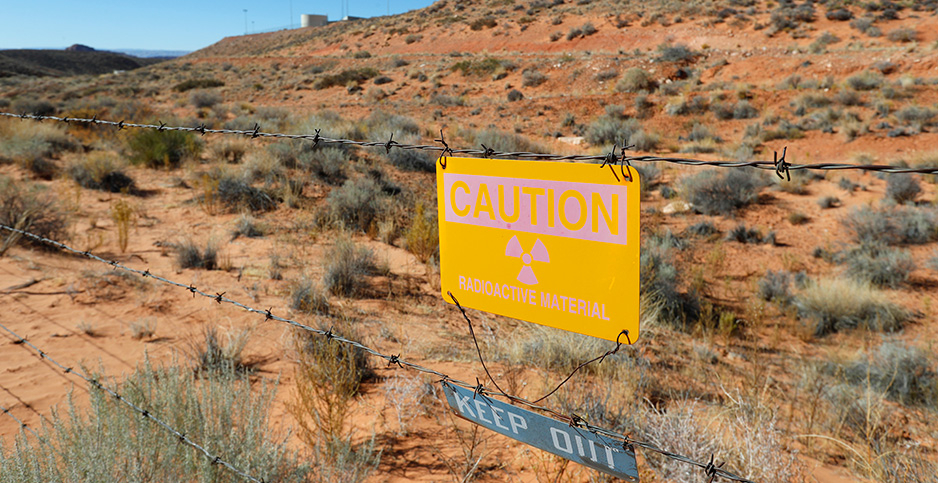 A radioactive warning sign hangs on fencing around the Shootaring Canyon Uranium Mill in 2017 outside Ticaboo, Utah. George Frey/Getty Images

The Interior Department has signaled it will remove uranium from its roster of critical minerals when it releases a draft of the updated list this fall.

The U.S. Geological Survey published the initial list of 35 elements in 2018 following an order by then-President Trump aimed at shoring up the supply of minerals for which the United States relies on imports.

Uranium’s inclusion stirred controversy because the former president said the list should include "non-fuel" minerals vulnerable to supply chain disruptions that are significant to U.S. economic and national security.

The vast majority of uranium is used to power nuclear reactors, which generate a fifth of U.S. electricity.

The USGS, which updates the critical minerals list every three years, published a methodology for revising it in May. "Fuel minerals, including uranium, were explicitly excluded from consideration in this analysis," the report says.

Others on the initial list include minerals used in batteries like cobalt and graphite, as well as the rare earth element group of minerals, some of which are used in electric vehicles and advanced weaponry.

"Classifying it that way let the Trump administration speed new mine permitting regardless of environmental considerations, open up special places like the Grand Canyon and Bears Ears to mining, and prop up their buddies in the uranium industry," he said via email.

Grijalva was the lead sponsor of the "Grand Canyon Protection Act," H.R. 1052, which would ban new mining claims on 1 million acres around the national park that contain uranium deposits. The House approved the bill as part of a broader public lands package in February (E&E News PM, Feb. 26).

Rep. Paul Gosar (R-Ariz.), who supports expanded mining, was less pleased with the USGS’s exclusion of uranium from the report. He noted the mineral’s use in nuclear weapons and energy.

"Removing uranium from the critical minerals list, with no regard for actual assessment of our need, shows that this administration is once again kowtowing to the environmental radicals who care nothing about our national security let alone good paying American jobs," Gosar said in an emailed statement.

The U.S. uranium mining industry has been reeling since the 2011 Fukushima nuclear disaster in Japan caused a glut of cheap uranium to flood the market.

Uranium miners Energy Fuels Inc. and Ur-Energy Inc. have sought federal relief to help them cope with the downturn. In 2018, they unsuccessfully petitioned the Commerce Department to create a 25% "Buy American" quota (Greenwire, May 19, 2020).

The petition did prompt Trump to create the Nuclear Fuel Working Group, which recommended creating a national uranium reserve. Congress provided $75 million for that measure last year, but the Energy Department left funding for the stockpile out of its fiscal 2022 budget request (Energywire, June 16).

"The move during the Trump administration to classify uranium as a critical mineral was motivated by concern in the U.S. uranium mining industry that they were uncompetitive, and therefore they felt that if they got uranium classified as a critical mineral that it would then become a candidate for subsidies," Squassoni said.

Energy Fuels Vice President Curtis Moore said uranium belongs on the list, in part, because the United States imports so much of it. U.S. nuclear power reactors purchased 48.9 million pounds of yellowcake in 2020.

Canada and Kazakhstan each supplied 22% of uranium used as fuel in the United States, according to the U.S. Energy Information Administration. Russia supplied 16%, Australia 11%, Uzbekistan 8% and Namibia 5%.

Squassoni said having a broad supply base can help soften the blow if there is a disruption. But Moore said that importing uranium from Russia and former Soviet republics could pose a security threat.

Still, Moore added that Energy Fuels hasn’t gained much from uranium being classified as a critical mineral.

"We have not seen any tangible benefit at this point of being on this list other than we can run around and tell people, ‘Hey, this is a critical mineral,’" he said.

A 2017 executive order signed by Trump has also aimed to shorten permitting for infrastructure projects, generally.

And a rule finalized weeks before President Biden took office in January added mining to the list of sectors eligible for fast-tracked permitting under a surface transportation law (Greenwire, Jan. 8).

Conor Bernstein, a spokesperson for the National Mining Association, said the critical minerals list has helped raise awareness of U.S. import reliance for some raw materials.

"The critical minerals list has certainly added visibility to the nation’s alarming mineral import reliance, the need to address duplicative mine permitting processes and to enhance mapping of an access to domestic resources," Bernstein said via email.