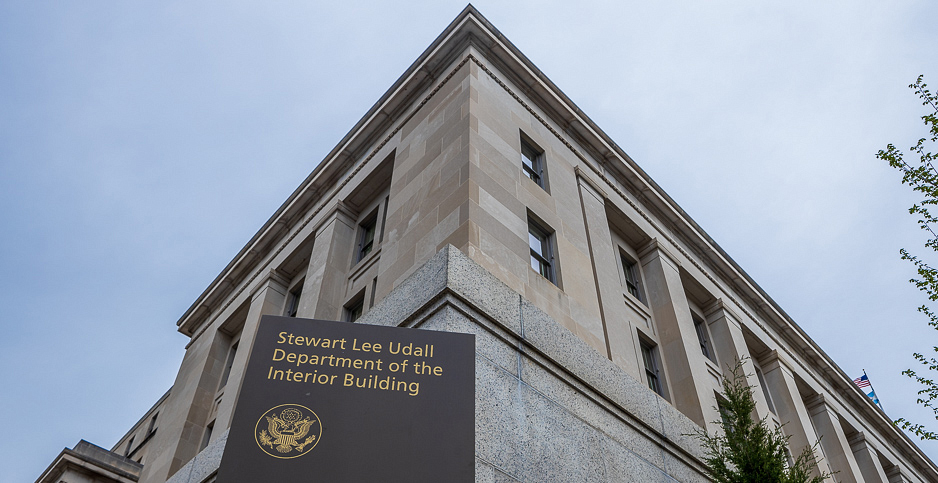 Some federal agencies post daily information about the number of workers who have tested positive for the disease caused by the novel coronavirus, but the Interior Department so far has declined to provide departmentwide details on how the pandemic has affected its 70,000 employees.

"The Department continues to follow the [Centers for Disease Control and Prevention’s] guidance for risk assessment and management of reported positive cases of COVID-19 and for disease prevention and protection of public spaces and workplaces," Interior said in a statement today.

Interior added that "the Department follows proper public health procedures, such as contact tracing, office and building cleaning, required periods of self-isolation for affected employees, and other public health measures, to contain and prevent exposure to the public or our employees."

Asked specifically yesterday whether a Fish and Wildlife Service worker had tested positive, FWS likewise issued a more-or-less general statement that made no reference to an employee’s test — although the present-tense phrasing seemed to imply that some workers have tested positive.

"The Service is tracking all reported positive employee cases," the agency stated, "and we will provide details on cases when an employee poses a reasonable risk to the public or Service staff in accordance with CDC guidance."

FWS added that the "Service is following proper public health procedures, such as contact tracing and other measures, to contain and prevent exposure to the public or our staff."

"Given the entire Department of the Interior is on maximum telework, most of the Service’s employees have not been in the workplace for about a month," FWS also noted.

While FWS Director Aurelia Skipwith maintains an office in the Interior Department’s main headquarters in Washington, D.C., other FWS headquarters staff are based — when not teleworking — roughly 9 miles away in Falls Church, Va.

The National Park Service has closed more than 100 of its sites and says that seven of its more than 20,000 employees have tested positive for COVID-19, but has not identified where the employees worked or their jobs (E&E News PM, April 2).

"Obviously, the identity of employees should not be disclosed; however we urge you to notify the public of the number of confirmed cases for each park so that the spread of the virus across the national park system is transparent and the public is appropriately informed," Phil Francis, chair of the Coalition to Protect America’s National Parks, said in a letter to NPS acting Director David Vela.

When asked for specific numbers, Interior spokesman Conner Swanson today said, "The Department is tracking all reported positive employee cases of COVID-19 to ensure proper public health actions are being taken, and employees and the public are informed when there is a possible risk of exposure in accordance with CDC guidance."

Some other agencies are more of an open book.

The Transportation Security Administration, for instance, reported today that 394 employees, both screeners and nonscreeners, have tested positive for COVID-19. Forty-one employees have recovered, and two have died.

"TSA leadership remains committed to being as transparent as possible in providing the public with information about the status of our employees while respecting our employees’ privacy," the agency states.

Energy Secretary Dan Brouillette, meanwhile, revealed in a post on the agency’s website Friday that two employees working in the agency’s headquarters in Washington have tested positive, as did a third based in Germantown, Md.

The latest results brought the agency’s total number of confirmed COVID-19 cases to six, with one worker having died from the virus (Energywire, April 14).

Last week, EPA told E&E News that 23 cases of COVID-19 had been reported among staffers nationwide.