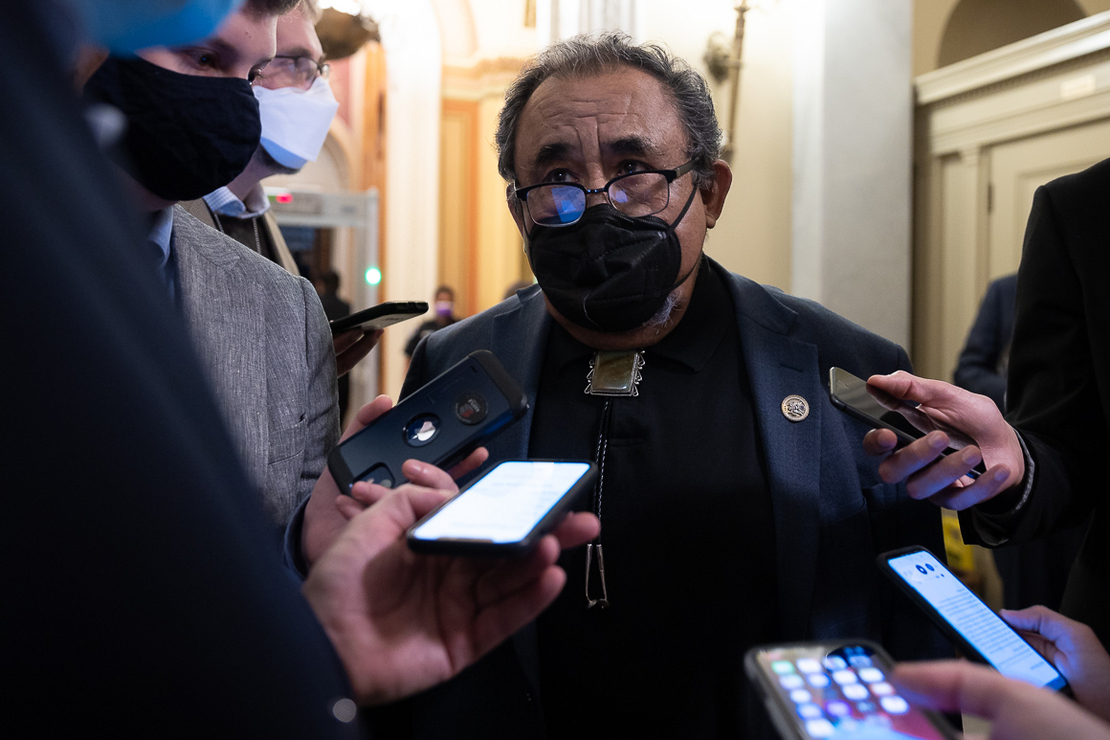 A report from the Interior Department on the federal oil and gas leasing program is further galvanizing environmentalists around calls to swiftly pass the Democrats’ massive climate and social spending package. It’s also likely to further harden Republican and fossil fuel industry opposition against the legislative push.

The battles lines being drawn by both sides are predictable, and the talking points between the two parties are familiar. Still, the response to the Interior report underscores the heightened emotions around the debate over the future of energy extraction, and the anxiety around who will decide its fate — and when.

The report unveiled on Friday — which had initially been promised in the early summer — makes no policy changes to the federal oil program, dismaying some climate hawks who’d hoped to see the Biden administration express either support for, or a plan to begin, phasing out the program (Greenwire, Nov. 26).

“Releasing this completely inadequate report over a long holiday weekend is a shameful attempt to hide the fact that President Biden has no intention of fulfilling his promise to stop oil and gas drilling on our public lands,” said Food & Water Watch Policy Director Mitch Jones.

The administration’s memo does, however, call for increasing the royalty rates that oil companies must pay in order to drill for minerals on public lands and for strengthening the requirements that companies set aside to plug and reclaim wells.

The report also expresses the administration’s view that the current $2 minimum bid per acre to buy leases at auction is too low, proposing an increase to discourage speculation.

The $1.7 trillion reconciliation package the House passed last week would do all of these things (E&E Daily, Oct. 29).

Several environmental advocacy groups on Friday released statements saying that if the administration won’t take executive action to make these changes on its own, Congress must, ideally through the reconciliation bill, H.R. 5376, the “Build Back Better Act.”

The reaction from disappointed greens poured in as the climate provisions of the House-passed reconciliation bill are about to become subject to some potentially major overhauls in the Senate, both to comply with parliamentary rules and address lingering concerns from moderate Democratic Sen. Joe Manchin of West Virginia.

“This report confirms what we have long known: the federal oil and gas program is profoundly broken and rigged in favor of oil industry CEOs. It shortchanges taxpayers, communities, outdoor enthusiasts, and wildlife," the League of Conservation Voters’ Conservation Program Director Alex Taurel said in a statement. “Toward that end, the Senate should retain the common sense reforms to the oil and gas program included in the House’s recently-passed Build Back Better Act.”

“Congress can act immediately with the Build Back Better Act to institute several common-sense budgetary reforms highlighted by [the] report,” Williams said in a statement. “While not sufficient alone, addressing these longstanding and well-known problems is a critical step toward fixing a broken federal oil and gas program.”

‘We know the real story’

In a statement Friday, Rep. Raúl Grijalva (D-Ariz.), chair of the House Natural Resources Committee, didn’t specifically push for the reconciliation measure to be the vehicle to changes to federal oil and gas policies.

Rather, he advocated for moving several stand-alone bills his panel has already passed that would raise royalty rates, strengthen bonding mandates and put the onus on lease holders to clean up orphan wells.

“The administration needs to manage public lands and waters consistent with its climate commitments,” Grijalva said, “and today’s report does not offer a plan to do that.”

But while the report fell far short of some progressives’ expectations that the administration was prepared to issue an indictment of the oil and gas industry, industry-aligned Republicans still saw the memo as a hostile act that would further drive up energy prices.

“This report shows the administration’s continued efforts to shut down American oil and gas production on federal lands and waters,” said John Barrasso (R-Wyo.), the ranking member on the Senate Energy and Natural Resources Committee.

“The Department of the Interior wants to increase costs for oil and gas producers at a time when energy prices are climbing for the American people. These higher costs will be passed on to consumers in the form of higher energy bills and prices at the pump.”

As energy prices have risen in the past several months, Republicans have started accusing the administration of provoking a crisis through its climate policies (E&E Daily, Nov. 19).

Republican lawmakers seem poised to attack Democrats on multiple fronts this week, when Congress returns to Capitol Hill from its Thanksgiving break and Democratic leadership begins its work in earnest of bringing the House-passed reconciliation bill to the Senate floor.

“They won’t say that outright — they’ll veil their attacks behind the guise of ‘increased reviews,’ ‘necessary reforms,’ ‘adjusting royalty rates’ and more, but we know the real story.”