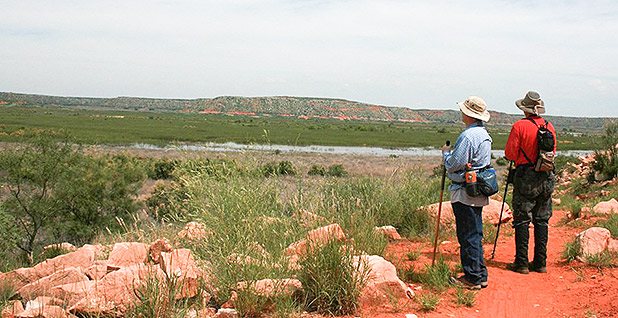 The Interior Department could skip one rule in its effort to erase all agency actions that unduly strain U.S. energy production.

Last week, Interior unveiled its review of all department actions with the potential to burden domestic energy activity. The report touched on the department’s ongoing examination of rules introduced by the Bureau of Land Management, Fish and Wildlife Service, and National Park Service under the previous administration to guide oversight of oil and gas operations on sites the agencies manage.

"The NPS rule was under review," said Interior spokeswoman Heather Swift. "No action has been taken or identified for it, which is why it is not in the report."

She did not confirm whether the current rule would be allowed to stand.

In keeping with the White House strategy to promote "energy independence and economic growth," Interior had previously indicated it would review four oil and gas rules (Energywire, April 4).

Two of those rules — introduced by President Obama’s Bureau of Land Management to control hydraulic fracturing and methane emissions on public lands — have since been proposed for rescission and suspension under the rulemaking process.

As of the release of Interior’s regulatory review, FWS and NPS had not introduced proposals to change their oil and gas rules. Last week’s report offered no further details on how — or even whether — the regulations would be unraveled.

Short of a proactive statement from Interior that the NPS rule will remain intact, it still appears to be fair game for revision, said Nicholas Lund, senior manager for the National Parks Conservation Association’s landscape conservation program.

"I would like a clear indication, but we don’t have that," said Lund, who supported the rule.

Interior’s report is a response to Trump’s energy independence order, but it’s unclear whether the department’s document offers a comprehensive picture of how it will fulfill the president’s vision.

"There’s no indication that this report is a path forward for them or is everything they’re planning to do or will do," Lund said.

Four energy industry groups said they opposed the NPS rule because it was duplicative.

"Our comment letters point out our concerns with the proposed regulations and we would hope that those are addressed by Interior," said American Exploration & Production Council (AXPC) President Bruce Thompson. "A fair and reasonable regulatory regime is not a problem for AXPC members, and we are always willing and anxious to sit down with our regulators in any agency to work on a result that is good for all parties."

He added that AXPC favors a complete repeal of the NPS rule.

"One way to achieve this would be the rescission immediately followed by engagement with all stakeholders with a view to generate thoughtful and fair regulations," Thompson said.

Swift said yesterday that she had no additional information to offer on the FWS regulation. Interior’s review includes slightly more information on the rule’s future — but not much.

"The FWS is reviewing its final rule, ‘Management of Non-Federal Oil and Gas Rights’ … to determine whether revision would be appropriate to reduce burden on energy," the report says.

Supporters of the rule said they objected to its characterization in the Interior review.

"The Department of the Interior’s ‘burdens’ report only briefly references this rule, noting that the administration is still reviewing it for potential burdens on energy development," said Mark Salvo, vice president of landscape conservation at Defenders of Wildlife.

"We contend there are none."

Instead of burdening the government, the rule introduces efficiency to the federal process for managing private mineral interests in the refuge system, Salvo said.

"Voiding this rule would create legal and operational uncertainty for both refuge managers and developers, threaten wildlife and watersheds, and undermine safe, sustainable economic development," he said.

"The legal and practical bases for the proposed regulations are, at best, questionable," the associations wrote. "As described above, the most prudent approach would be for the Service to continue to manage oil and gas activities under its 2012 guidelines for a sufficient period of time, and with adequate staffing, resources, and training, to accurately determine the areas in which those guidelines are effective and the areas in which they are not."

API and IPAA suggested changes to the proposed FWS rule in anticipation of the Obama administration moving forward with the regulation. Those alterations included adjustment of the rule’s geographic scope, timing, and appeals process and financial assurances.