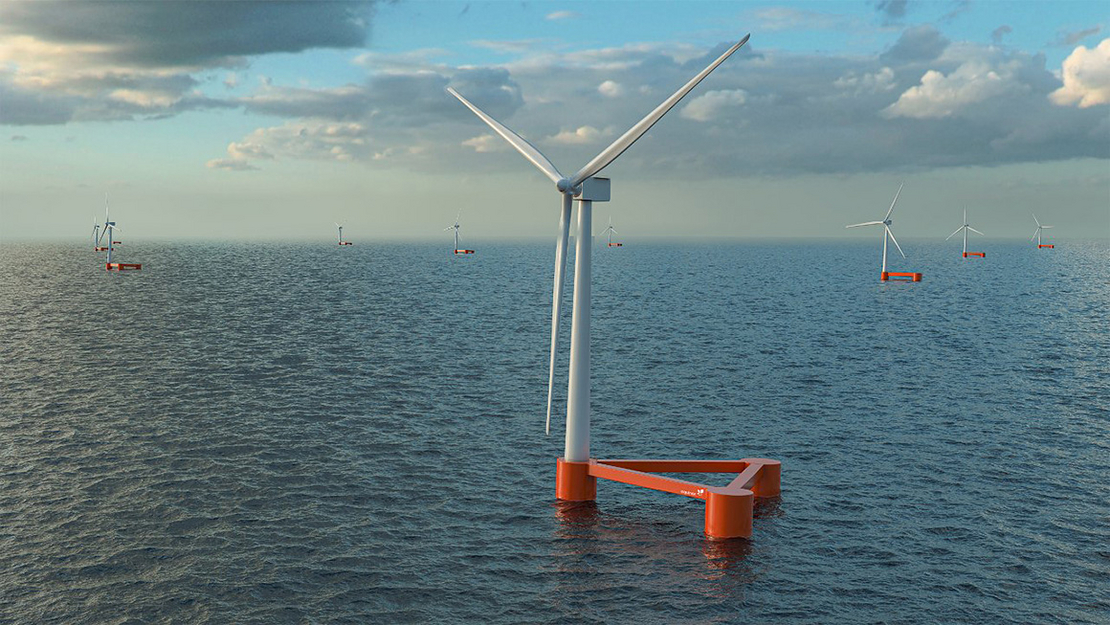 A depiction of a floating offshore wind farm by Equinor. Equinor

The Biden administration is set Tuesday to auction off the first-ever floating offshore wind leases in the Pacific Ocean, setting up a bidding war off the coast of California that could shape the industry for years to come.

The Bureau of Ocean Energy Management (BOEM) is selling five leases off the northern and central coast, a total area larger than the city of Los Angeles. The Golden State leases could support roughly 4.5 gigawatts’ worth of wind farms, enough electricity to power 1.5 million homes.

Already the sale has nearly 50 entities pre-qualified to bid, and experts are predicting a highly competitive contest between major oil companies, international and domestic energy developers to capture a share of the emerging Pacific market.

“We do expect robust participation,” said Josh Kaplowitz, vice president of offshore wind at the American Clean Power Association. “I think this very much indicates the strong demand for the right to develop offshore wind on the West Coast.”

Developers are eager to secure development rights in a market where both political support for offshore wind and demand for renewable power is high. But experts say companies will also be wary of driving up prices that make projects more expensive — a concern after a bidding war earlier this year totaled $4.4 billion for leases off the coast of New York.

Tuesday’s auction in federal waters is part of President Joe Biden’s larger climate agenda to accelerate an ocean wind industry nationwide and decouple the nation’s grid from fossil fuels. The administration wants to lift 30 GW of offshore wind by 2030 and an additional 15 GW of the still-developing technology of floating wind by 2035.

Much of that 15 GW is likely to come from the Pacific, making Tuesday’s sale a formative first step for the industry. The winners will hold rights to build the first arrays off the West Coast, where wind resources are high, but challenges of transmission and port readiness will also play a role in shaping the floating wind industry’s fortunes.

Floating turbines are moored to the seabed with cables instead of fixing pylons directly to the ocean floor. Projects like Equinor ASA’s Hywind Tampen, under construction now in the North Sea, will add to just a handful of floating wind farms worldwide.

The newness of the technology hasn’t scared off potential bidders in California. In total, 43 entities have preregistered to participate in the seminal auction, blowing past the number of potential players in previous auctions for offshore wind leases in the Atlantic Ocean.

The companies include oil heavyweights gathering renewable projects to offset their fossil fuels like BP PLC, Shell PLC, Equinor and TotalEnergies SE. They are a mix of new entities and joint ventures, with many familiar companies from earlier offshore wind sales in the United States, such as RWE AG, Invenergy, Ørsted AS and Avangrid Inc.

Samantha Woodworth, a senior wind research analyst with Wood Mackenzie, said she expects a competitive clash but noted that companies are going to be wary of repeating the bidding war in the New York Bight.

Offshore wind players realized shortly after that sale that it got out of hand and likely risked harming the nascent industry, Woodworth said.

A higher cost in securing leases means a higher price tag for the project overall, impacting what developers can get for contracts with power purchasers and ultimately how much offshore wind poses in cost to consumers, she said.

Elevated costs are already in the back of many developers minds ahead of Tuesday’s sale because of near term supply chain pressures and high commodity prices in the United States, she said.

Floating wind is advantaged amid a globally tight supply chain in one key way — it doesn’t require use of the world’s small fleet of turbine installation vessels, Woodworth said. That’s because floating turbines are typically constructed at port and tugged out to sea.

The pressures of a still developing supply chain and a nascent technology could mean the leases sold Tuesday don’t produce power for many years, said Walt Musial, who leads offshore wind research at the Department of Energy’s National Renewable Energy Laboratory.

“Ports have not yet been built, transmission on the north coast is uncertain, and the commercial scaling of floating wind is just getting started globally,” Musial said in an email. “The technology is ready, but the supply chains and infrastructure need to be set up for serial production.”

Still, California’s commitment to lifting wind as part of its own climate and clean energy laws — 25 GW of offshore wind by 2045 — gives the new industry additional confidence in its investments, he said.

“I would expect significant acceleration in the West Coast investment in floating offshore wind infrastructure and supply chains and an influx of new players,” he said.

“California will be the big winner in this first lease sale,” he said. “It demonstrates the willingness of industry to make the big investments necessary to realize offshore wind’s very substantial climate, clean energy, and jobs benefits.”

The leases sold Tuesday offer a 20 percent bidding credit to developers that commit to investing in the supply chain for offshore floating wind or in wind energy workforce training.

BOEM has also included two 5 percent credits unique to the California sale for bidders that commit to community benefit agreements with groups potentially affected by changes to the marine or coastal environment — such as from the visual impacts of turbines — or agreements with other ocean users whose resources are impacted by potential development, such as Native American tribes or fishermen.

The credits are a nod to the lingering hesitancy, or in some cases outright opposition, to offshore wind development in California from some groups.

Though BOEM has been preparing the offshore wind energy sales for several years, Mike Conroy, with the fishing group the Responsible Offshore Development Alliance, said fishermen felt “unheard” and worried about the outcome of Tuesday’s sale.

“There’s a lot of unknowns still,” Conroy said of floating wind in the Pacific. “We just have no idea what the impacts are gonna be. And that’s both confusing and problematic.”