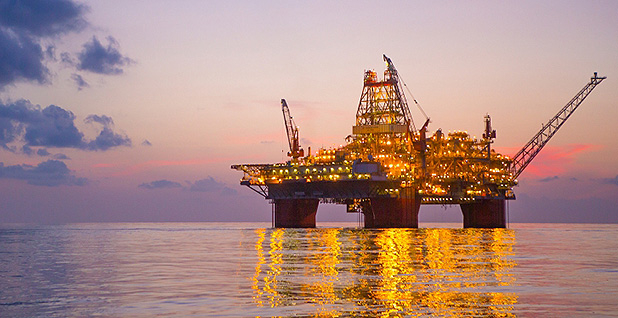 A BP PLC oil platform in the Gulf of Mexico. BP/Flickr

According to an Interior Department report, even if oil prices climbed to $160 per barrel, little or no oil is likely to be pumped from the offshore Straits of Florida, the Oregon/Washington outer continental shelf areas or 10 of the 14 Alaska planning areas identified in Interior Secretary Ryan Zinke’s 2019-24 leasing program.

Oil prices of $100 to $160 per barrel could boost extraction in the nation’s most promising fields in the central and western Gulf of Mexico and Alaska’s Chukchi and Beaufort seas.

Only marginal drilling increases would occur at the $100 to $160 price level in offshore Southern, central and Northern California; the North and Mid-Atlantic; and the eastern Gulf of Mexico.

These estimates were outlined in a Bureau of Ocean Energy Management report released last month together with Zinke’s plan to make more than 90 percent of the U.S. outer continental shelf open for oil and gas leasing.

That report evaluates how much undiscovered economically recoverable oil and gas is likely to be extracted at oil prices of $40, $100 and $160 per barrel and natural gas prices of $2.14, $5.34 and $8.54 per thousand cubic feet.

BOEM’s report also estimates the "net social value" of oil and gas development in the proposed OCS planning areas — a value reached by subtracting the government’s appraisal of the environmental and social costs from the estimated economic value of the oil and gas.

But if oil prices fell to $40 per barrel, drilling off the shores of Northern California, the Beaufort Sea and Alaska’s Cook Inlet would have negative net social values. And development in the Chukchi and South Atlantic planning areas would have "negligible development value."

BOEM didn’t calculate the net social value of oil development in the Straits of Florida or 10 remote planning areas along Alaska’s western and southern coasts, explaining that those regions have "negligible development values" or "negligible resources."

Oil and gas industry officials are rejecting BOEM’s calculations, which they say vastly underestimate the amount of undiscovered oil and gas likely to be available along U.S. shores.

But in recent years, oil companies haven’t been allowed to assess those regions. "You can’t know what you can’t see," Martin observed.

The oil industry continues to lobby for a chance to explore along U.S. coasts. In comments on the draft BOEM plan, Statoil ASA noted that "[a]s technology improves and economic conditions change, leases once deemed noncommercial evolve into viable drilling candidates with commercial potential."

"Because of this evolution, it is important to allow innovative companies the opportunity to pursue new leases and to test innovative geologic ideas and to employ advancements in technology for drilling and production," the Norwegian multinational oil and gas company said.

In separate comments, BP PLC argued that "[d]evelopments in the Atlantic OCS will benefit from the industry’s latest advances and innovations in deep water technology."

For the near term, however, industry is taking a highly cautious approach to new oil exploration projects, according to a recent report by Wood Mackenzie.

Andrew Latham, Wood Mackenzie’s vice president of research and global exploration, noted that the number of committed explorers has dwindled, with those companies looking for the most promising prospects.

"Looking to 2018, the industry will drill fewer, better wells focused on plays that are commercially attractive," he said.

Ocean Foundation fellow Richard Charter said the idea that the price of a barrel of oil would hit $160 over the five-year time span of the Trump administration’s draft proposed offshore program is a "pipe dream" (Energywire, Jan. 5).

And even if per-barrel prices climbed that high, oil would find itself "noncompetitive" with offshore wind, concentrated solar and certain biofuels, Charter said. "All of those prices are coming down," he said.

Conservation lobbyist Andy Kerr agreed that new offshore oil endeavors would face competition with comparatively cheaper onshore production. "Most of that oil offshore that Zinke’s proposing to lease is not economic, and it’s not going to be," Kerr observed.