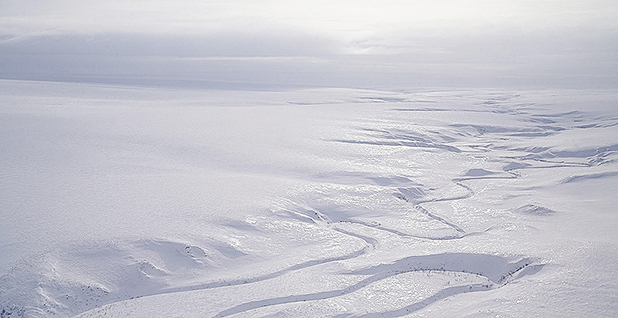 The Trump administration is expected to release a final environmental review of the National Petroleum Reserve-Alaska tomorrow. BLM/Flickr

The Trump administration will release a final environmental review of energy development in Alaska’s National Petroleum Reserve tomorrow, clearing the way for expanded oil and gas drilling opportunities in the Arctic.

The NPR-A is currently managed under an Obama-era plan that divides the 23-million-acre reserve roughly fifty-fifty between land open to lease for oil and gas exploration and areas that are precluded from industrial activity.

But the Trump administration has argued that those restrictions might keep some 350 million barrels of oil in the ground (Energywire, Aug. 23, 2019).

The proposed revision, to be published tomorrow, would expand developable areas to 82% of the reserve’s mineral estate, or 18.6 million acres, according to a Federal Register pre-publication notice.

That approach represents a new direction from what was explored in the draft environmental review released in late 2019.

Controversy over oil and gas development in the Arctic has largely focused on the pristine Arctic National Wildlife Refuge, east of the NPR-A along the Arctic coastline.

Congress opened ANWR’s coastal plain to potential oil and gas development in 2017 despite decades of opposition from environmentalists and some Alaska Natives. The Trump administration has signaled that a first lease sale could be announced at any time.

NPR-A, which was set aside in the 1920s as a potential oil source for the Navy, has inspired less attention, and its lease sales to industry have often been lackluster. A sale last year, however, showed a spike in interest (Energywire, Dec. 12, 2019).

The Obama-era management plan for the reserve didn’t generate much pushback from oil and gas advocates in Alaska when it was finalized in 2013.

But Arctic exploration has progressed. ConocoPhillips, which currently operates just inside the eastern border of NPR-A, has made discoveries the company says could be expanded if restrictions were reworked for the Teshekpuk Lake area — a caribou calving ground and diverse avian habitat.

The expansion, and existing ConocoPhillips development, is not without controversy. Alaska Natives closest to the development in the village of Nuiqsut have raised concerns of environmental degradation and community health impacts (Greenwire, April 17).

Opponents of expanded oil and gas development said the new plan is a "reckless" approach to managing the fragile Arctic ecosystem and wrongheaded because of the increasing risks associated with changing the climate by continuing to burn fossil fuels.

"Drilling oil and gas wells in the western Arctic would do immense harm to Arctic wildlife already under siege from the climate crisis," said Kristen Monsell, a senior attorney at the Center for Biological Diversity. "All Arctic oil should stay in the ground."

Correction: The original version of this report misstated the village closest to the ConocoPhillips development. It is Nuiqsut.