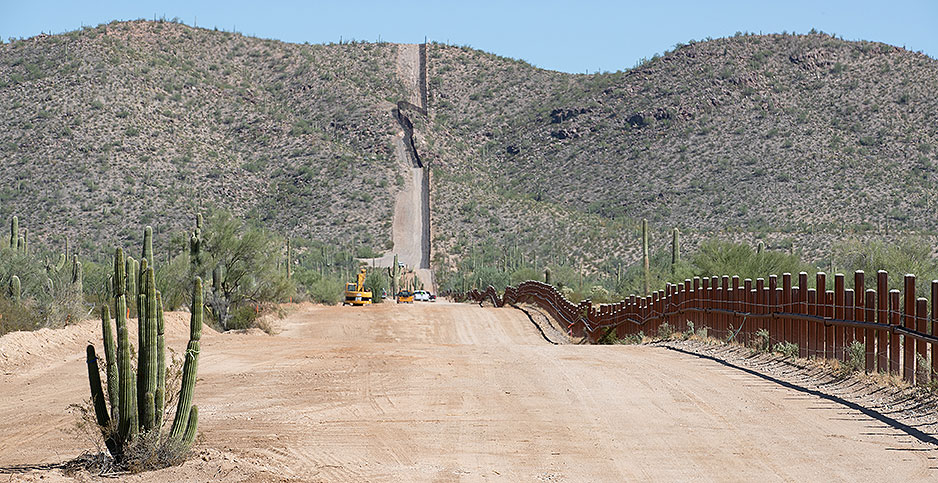 During a nearly two-hour hearing, lawmakers on the House Natural Resources Subcommittee for Indigenous Peoples of the United States also criticized the administration for failing to adequately consult with Native American tribes as it looks to expand border walls across the nation’s 2,000-mile southern boundary.

"This administration has blasted and bulldozed multiple sites, including burial grounds, along the southern border that are sacred to the religion and culture of the Tohono O’odham Nation, without any kind of meaningful tribal consultation and often without advanced notice," subcommittee Chairman Ruben Gallego (D-Ariz.) said.

Much of the session focused on recent demolition projects and construction at Monument Hill, a site sacred to the Tohono O’odham Nation located within the Organ Pipe Cactus National Monument.

The Tohono O’odham reservation, located adjacent to the monument, is situated across a 62-mile stretch of the border. The tribe’s membership is likewise split with 34,000 members in Arizona and 2,000 members in northern Mexico.

"The federal government’s continued destruction of our religious and cultural resources is nothing less than the bulldozing of our church grounds and our cemeteries. For us, this is no different than [the Department of Homeland Security] building a 30-foot wall along Arlington Cemetery," testified Tohono O’odham Nation Chairman Ned Norris Jr.

He added: "The federal government owes our government and the governments of local border communities more respect."

Gallego yesterday described that defense as a "gaslighting argument of ‘We have to destroy it in order to protect it.’"

But Scott Cameron, Interior’s principal deputy assistant secretary for policy, management and budget, echoed that justification yesterday, further asserting that the fencing is needed to prevent "more deaths and more movement of drugs that ruin lives at a distance."

He went on to note that Interior manages a significant portion of the borderlands, about 40% of the 2,000-mile southern boundary.

"Along this border are cultural resources, wilderness areas, wildlife refuges, plants and animals [that] are adversely impacted by land degradation and destruction from unauthorized vehicles, trash, fires, contaminated water and other activities related to unlawful border activity," Cameron said.

But New Mexico Rep. Deb Haaland (D) fired back at Cameron, accusing the Trump administration of equating religious and cultural sites with garbage and human waste.

"Can trash be cleaned up?" Haaland asked Cameron, who attempted to answer before being directed to respond with a single word.

"OK, good," Haaland responded. "But a sacred site that’s been blasted, it can never be made whole again. I want you to understand that. And you know why? Because ancestors put those things in the ground with care and love and tradition and prayers. Those can never be regained again."

She added: "I want you to understand that: You can’t equate sacred sites and burial grounds with trash."

Haaland, one of the first two Native American women elected to Congress in 2018, concluded her remarks: "The damage that this administration is doing to this area is irreparable. It’s irreparable. And you didn’t even ask. Not one asked permission of these people to do any of that. It’s shameful. It’s immoral. … I don’t know how any of you sleep at night."

‘All we’re doing is breaking up the rock’

Unlike other construction projects on federal lands, DHS is not required to adhere to various environmental laws, including the National Environmental Policy Act and the Native American Graves Protection and Repatriation Act.

The agency is allowed to wave those regulations under a provision of the Real ID Act of 2005, which aimed in part to speed construction of border barriers (Greenwire, May 15, 2019).

In his remarks, Norris urged Congress to limit or withdraw that waiver authority on behalf of the Tohono O’odham Nation.

In an interview following the hearing, Cameron pushed back against allegations that it is permitting the desecration of sacred tribal lands.

"We would not, I think, concede the assumption that … we are, in fact, destroying cultural sites," Cameron told E&E News. "Whenever we discover archaeological resources, we’re reaching out to the affected tribe, talking about whether or not they would like to have those resources repatriated to the tribe in question."

He also asserted that critics of the border wall have exaggerated the construction efforts, pointing to a video House Natural Resources Chairman Raúl Grijalva (D-Ariz.) played during his remarks of recent demolition work.

"As you might have seen from the video, there were not huge boulders flying around hither and yon," Cameron said. "All we’re doing is breaking up the rock so we can more easily do the excavation and frankly disturb less of the surface of the land."

He added: "We’ve gotten no indication, no evidence that we’re aware of, that any particular resources have been destroyed as a result of that construction activity."

Cameron went on to compare construction of the border wall to development in nearby metropolitan areas.

"It may be also worth pointing out that in terms of the tribe’s ancestral area, that includes downtown Phoenix, downtown Tucson, and yet clearly the state of Arizona is interested in urban development over the last century or so," Cameron said.

During the hearing, Norris noted the tribe did not set the boundaries of its reservation land, leaving many important sites outside its borders.

"It’s hard to see the blasting that you showed on the video today," Norris said, struggling to speak. His voice broke as he concluded: "That area is home to our ancestors, and by blasting and doing what we saw today, has totally disturbed, totally forever damaged, our people."