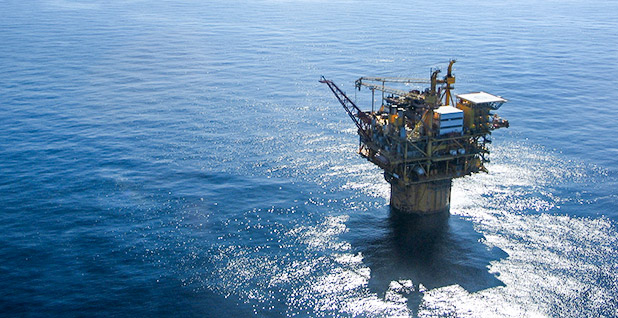 An oil and gas production platform in the Gulf of Mexico off the coast of Louisiana. Katie Howell/E&E News

The Trump administration brought employees back to work last Thursday to advance the controversial outer continental shelf five-year leasing plan — just two days after the Interior Department said the work was shelved during the government shutdown.

Last week, Interior updated its contingency plans so 40 employees at the Bureau of Ocean Energy Management could be available "on an on-call basis to perform the exempt functions of preparing National Outer Continental Shelf (OCS) Program decision documents."

That’s the same day Interior officials told E&E News in an email that no one at BOEM was working on the five-year plan.

Industry sources had suspected the five-year leasing plan would be delayed due to the government shutdown. Initially, Interior officials contended that was mere speculation, noting a firm publish date was never given.

Today, officials confirmed BOEM employees resumed work on the five-year plan Thursday. They did not respond to further questions by deadline.

The former shutdown plan, dated December 2018, does not mention the outer continental shelf leasing program. It says that BOEM employees would not work on new energy development and that essential employees would permit ongoing work to buttress sister agency the Bureau of Safety and Environmental Enforcement, the offshore regulator.

In recent weeks, critics have cried foul that the Trump administration has given the oil industry special treatment during the shutdown.

Michael Bromwich, the high-profile attorney and an Obama-era director of offshore federal regulation, said the new shutdown plan once again shows the Trump administration’s desire to accommodate industry while its own employees are forced to work without pay.

The plan also says if the shutdown extends past today, more employees will be designated as exempt to prepare for upcoming oil leasing sales in the Gulf of Mexico. They will be exempt "only for the amount of time needed to complete this work" and paid with carryover funds.

"Failure to hold these sales would have a negative impact to the Treasury and negatively impact investment in the U.S. Offshore Gulf of Mexico," the plan says.

Offshore wind lease sales, however, appear to be on hold. The updated contingency plan does not mention wind energy. Offshore wind industry sources told Bloomberg today that they are concerned the government shutdown could complicate development in the Northeast.