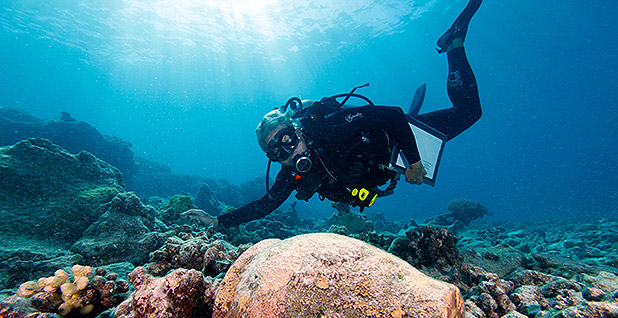 Senior Interior Department officials prepared last fall to eliminate the Northeast Canyons and Seamounts Marine National Monument — even as they had yet to agree on the public justifications for doing so, according to newly disclosed internal documents.

Copies of those emails, provided to E&E News by the Center for Western Priorities, detail Interior’s strategy — including a focus on timber harvesting, mineral rights, and oil and gas extraction — as it reviewed the boundaries of more than two dozen national monuments under an executive order from President Trump.

The documents also disclose internal deliberations over the future of some marine monuments, including reintroducing commercial fishing to some sites and reducing the boundaries of others.

"There is no explanation in the Proclamation as to why the objects are threatened by well-regulated commercial fishing," Zinke wrote, referring to President Obama’s proclamation establishing the 3.14-million-acre Northeast Canyons and Seamounts monument in 2016.

But newly disclosed documents reveal senior Interior officials had drafted presidential proclamations to eliminate the marine monument, which has been the subject of criticism and a federal lawsuit from the fishing industry.

In an Aug. 22 email, Interior official Randy Bowman, who led the monument review process, drafted two proposals: one in which Trump would revoke the Northeast Canyons and Seamounts monument and the other in which he would amend the proclamation to remove restrictions on commercial fishing.

On Sept. 14, Bowman suggested in an email that impacts to the fishing industry were not a major consideration in revoking the monument’s status.

"In my initial draft of this memo, which was (by direction) for revoking the designation rather than just removing the fishing restrictions, I did not even mention impacts to fishermen, as I felt they were so minor in the context of the overall New England fishing industry as to undercut the case for making changes," Bowman wrote.

"Since we are now focused on fishing, we need to say something about adverse impacts, but the best case is the crab and lobster fishery, and I believe this is all we should address," he said.

In another September email, Bowman also advised that Interior strike data on commercial fishing in the monument. A deleted sentence states that four vessels in 2014-15 relied on the monument area for more than 25 percent of their annual revenues, while the majority of ships generated less than 5 percent of their revenues from the area.

"This section, while accurate (except for one sentence) seems to me to undercut the case for the commercial fishing closure being harmful. I suggest in the attached deleting most of it for that reason," Bowman wrote.

Saving Seafood Executive Director Bob Vanasse disputed the idea that data didn’t support the repeal of the commercial fishing ban but said it instead was removed because it could be taken out of context.

"While it is generally accurate, if one looks at the entire fishing industry in the region, to make the statement that only a small number of vessels derive more than 5 percent of their revenue from the Monument area, for those vessels and fisheries that conduct significant portions of their operations in the monument area, the economic harm is significant," Vanasse said in a statement.

He added in an interview: "The suggestion is that the administration is hiding the facts, and I don’t think that’s the case."

Other emails released by Interior, and first reported by The Washington Post, show proposed redactions to "predecisional" information that could "reveal [National Monument] review strategy."

Among the proposed redactions, Interior officials planned to strike four pages of a 25-page analysis on the Grand Staircase-Escalante National Monument in Utah.

Those sections addressed activities that may have occurred if the monument had not been designated by President Clinton in 1996, such as coal extraction and antiquities protections.

The proposed redactions would have also eliminated findings that visitation to the area would not have increased without the monument status.

But Trump ultimately reduced the size of both Grand Staircase-Escalante and Bears Ears national monuments in Utah in December, eliminating protected status for more than 2 million acres of land in the largest rollback of monument lands to date.

"There are two big takeaways from these documents — the first is that they show with absolute clarity that the outcome of the monuments review was preordained," Weiss said. "Secretary Zinke’s political appointees went out of their way to not just ignore, but hide facts that got in their way."

"The botched redactions call into question the tens of thousands of other pages that have been released by Zinke’s Interior Department," Weiss said. "These documents show them abusing the ‘deliberative process’ privilege to hide inconvenient facts. Basic facts aren’t deliberative, and they should never be hidden from public documents."