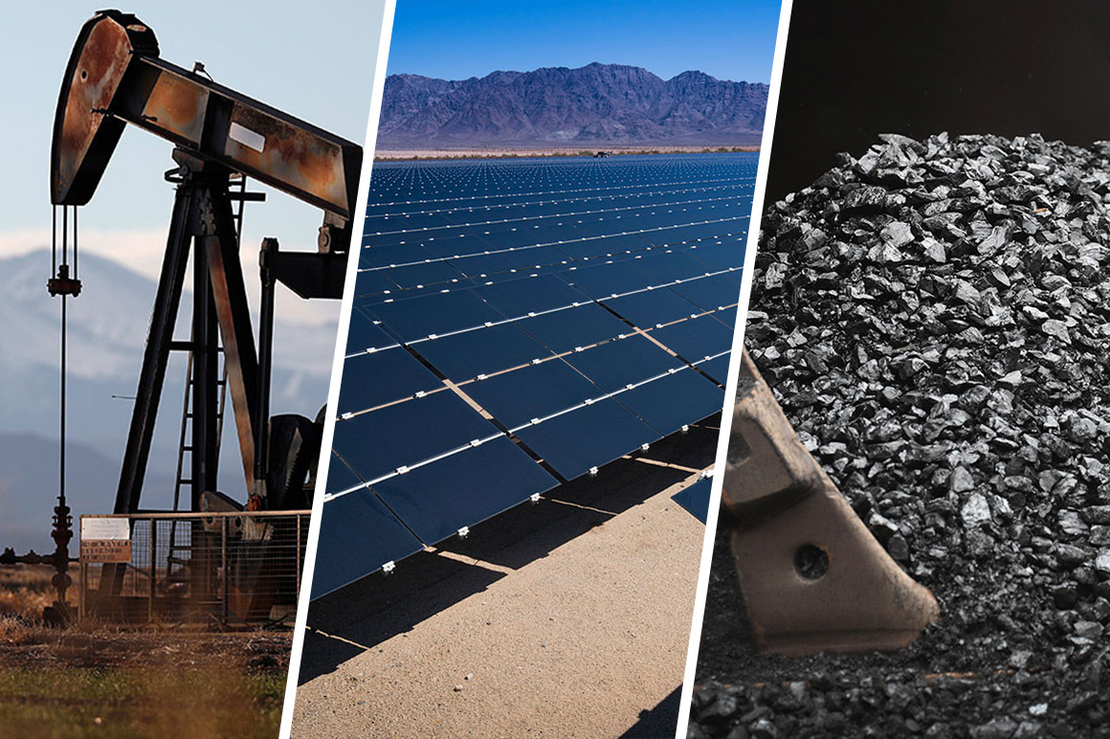 The Interior Department’s energy strategy this year could help determine whether the Biden administration can secure a clean energy legacy as potent as the fossil fuel dominance that characterized public land policy during the Trump years.

The department will deploy a two-pronged approach: ramping up deployment of clean energy and attempting to constrain its massive fossil fuel programs through regulatory reform.

“They have plenty of time to get this done if they stay focused on it,” said Mark Squillace, a former Interior solicitor and federal law expert at the University of Colorado Law School.

Interior’s efforts will include authorizing solar energy in Western deserts and leasing waters in the Atlantic Ocean to offshore wind developers, as well as reexamining the rules that govern decommissioning offshore pipelines, drilling for oil and digging for federal coal.

The oil and gas reforms ahead, like hiking royalty rates and strengthening bonding requirements for oil drillers, are in lieu of shutting down the oil and gas program, as many activists continue to push for, and as President Biden once promised on the campaign trail. But the proposals on the table would be some of the most significant changes to federal leasing practices for oil and gas in decades.

Mining is also under scrutiny from the administration, which will release more details on how the coal program may be revamped later this year. The Fish and Wildlife Service, too, could add a listing under the Endangered Species Act to seriously challenge a large lithium mine proposed in Nevada.

Meanwhile, renewables are about to get a boost on public lands. Interior officials recently announced an offshore wind lease sale in the New York Bight and have advanced reviews of potential offshore wind leasing in the Gulf of Mexico and California. They’ve also committed to streamlining the permitting process to get clean energy deployed faster.

“The Biden-Harris administration has made tackling the climate crisis a centerpiece of our agenda, and offshore wind opportunities like the New York Bight present a once-in-a-generation opportunity to fight climate change and create good-paying, union jobs in the United States,” said Interior Secretary Deb Haaland in a statement.

The same fervor for clean energy development will apply to solar farms out West.

The political will from the administration to deploy clean energy dovetails with market momentum in already-growing industries like solar and offshore wind, but it also underscores the White House’s ambition to deploy public land and water resources to help reach its climate goals.

But greens are watching closely to press the Biden administration to depress fossil fuels as eagerly as it advances renewables (see related story).

But he added that the administration also needs "an aggressive plan to wind down fossil energy production that ensures support for transitioning communities.”

The regulatory agenda on federal oil and gas for 2022 is expansive. Among a dozen areas of focus, rulemakings on schedule include new rules for high-pressure, high-temperature oil and gas drilling offshore and decommissioning standards for old offshore infrastructure like pipelines.

Interior will also kick off a modernization of its oil and gas leasing practices, an area that gained intense scrutiny in Biden’s first year after the administration failed to make good on its campaign promise to end new federal oil and gas drilling and its effort to pause leasing was thwarted by a federal judge.

A recent review of the federal oil and gas program flagged 100-year-old oil royalty rates and low bonding requirements as weaknesses in the program, along with allowing the industry to guide the leasing process by determining where federal officials offer land for sale.

Those criticisms echo long-standing critiques by the Government Accountability Office and are likely to be addressed in this year’s rulemaking process.

But it’s an approach that’s disappointing to many environmental activists. "I can only conclude that the administration is walking away from its commitment to take meaningful action that aligns the federal public lands oil and gas program with the urgency demanded by the climate crisis," said Erik Schlenker-Goodrich, executive director of the Western Environmental Law Center.

The Biden administration’s oil and gas strategy is also puzzling the oil and gas sector and leaving observers unsure of how the regulatory regime may proceed.

“Where are the bold changes candidate Biden promoted?” she asked.

One question will be whether some of the regulatory changes could end up being approved in the pared-down climate spending package Biden yesterday said he could embrace (E&E Daily, Jan. 20).

That kind of measure could end up including oil and gas provisions from the Democrats’ now-dead $1.7 trillion "Build Back Better" spending plan, such as royalty hikes, new royalties and a methane fee.

Regardless, oil industry and Republican opponents will stand ready in opposition, whether on Capitol Hill or in the courts.

“We’ll be looking for opportunities to fight many of these same bad provisions if the process gets skipped or laws ignored, as has happened before with Interior rules we were able to overturn in court,” said Kathleen Sgamma, president of the Western Energy Alliance, an oil trade group in Denver.

Ryan Kellogg, a professor at the University of Chicago Harris School of Public Policy, said oil and gas reforms have legal merit. He stressed that these aren’t climate strategies so much as modernization of the federal program.

“I think of all of these reforms less as climate action and more as reforming federal oil and gas leasing,” he said.

On climate this year, Interior is working to stem methane emissions from abandoned infrastructure: The agency’s leadership is rapidly setting up a $4.7 billion national orphan well cleanup effort, which includes new attempts to identify orphan wells, track their methane pollution, plug old wells, reduce idle wells that are at risk of being abandoned, and fund states and tribes to do the same. The federal side of the program, funded at $250 million, must be set up by mid-January and will include a slew of federal agencies working together.

“This will be an impressive effort to coordinate among agencies,” said Nada Culver, head of policy and program at the Bureau of Land Management, during a recent roundtable on orphan wells.

Interior’s most direct climate action may not be in its fossil fuel work this year, but rather in renewables deployment.

The administration has set a goal to permit at least 25,000 megawatts of onshore renewable energy projects by 2025, and it appears that the big driver of Interior’s energy campaign will be solar power.

Consider: BLM currently has 54 renewable energy projects under evaluation in the permitting pipeline, Interior said in December. Forty of those proposed projects are solar.

Part of the reason for this is that states like California, New Mexico and Nevada have tens of millions of acres of available federal land that contains some of the world’s best solar power resources.

Another major reason for solar is that over the past decade, BLM has studied hundreds of thousands of acres and identified them as suitable for utility-scale solar power projects as part of the Western Solar Plan, finalized by the Obama administration in 2012.

The Arica and Victory Pass photovoltaic solar power projects, if built, would collectively produce up to 465 MW of electricity — enough to power more than 130,000 homes. Last week, BLM approved the Oberon solar project, also in the DRECP area, which if built would have a 500-MW capacity, or enough to power roughly 140,000 homes (Greenwire, Jan. 18).

Before that, BLM had success with the first two competitive solar leasing sales in the bureau’s history inside four SEZs in Utah and Arizona that, if fully developed, could produce up to 1,425 MW of electricity (Greenwire, Dec. 9, 2021).

BLM has estimated that full build-out in all seven of these SEZs could result in projects capable of producing more than 17,000 MW of electricity — enough to power millions of homes.

Sklar, of George Washington University, said guiding this development to SEZs and other "federal sites already reviewed for this type of development" is "the fastest way to drive big-ticket projects.”

In addition to Western solar, Interior will try to raise new wind arrays on the country’s outer continental shelf, where the Bureau of Ocean Energy Management is expected to continue burning through environmental reviews for proposed offshore wind farms.

The Biden administration has promised to clear 16 offshore wind arrays by the end of his first term. So far, BOEM has approved two but has a dozen in process and expects several more to be filed in the months ahead.

A lease sale is also expected to advance in the weeks ahead in the New York Bight. It will be the first offshore wind sale of the Biden administration, which has signaled that seven new lease sales are possible in the coming years.

The American Clean Power Association estimates that expanded leasing from the Biden administration could generate $4.5 billion in new federal income.

While it hasn’t generated as much controversy as oil and gas reform — yet — mining on public lands is also facing a big year, and Interior is poised to clash with the industry over a series of potentially contentious rulemakings and reviews.

First, there’s coal: The Office of Surface Mining Reclamation and Enforcement, which oversees coal mine operations, plans to spend the year redoing a rule established by the Trump administration that reduced the federal role in investigating health and safety complaints in and around coal mines. The office will release a proposed rule in July and a final rule by November, according to Biden’s most recent Unified Agenda (Greenwire, Dec. 23, 2021).

The Bureau of Land Management is expected to continue its review of the federal coal leasing program, which it says will scrutinize the efficacy of the leasing program at a time when environmentalists are lobbing criticisms at Interior for lowering royalty rates at certain coal mines (Greenwire, Aug. 17, 2021).

"Those of us who live in Western communities and states dependent on coal jobs and revenue have submitted countless sets of comments urging Interior to shift its focus to ensuring that mine sites are reclaimed, and to helping our region and its workers transition," said Bob LeResche, a member of the landowners group Powder River Basin Resource Council in Wyoming. "We don’t need another report on the shelf. We need action.”

Most recently, BLM stated it would release a report detailing the scope and form of the review, following a public comment period that closed in fall 2021. The agency had plans to announce “additional steps” for the review by November 2021, although an announcement has yet to occur.

The Fish and Wildlife Service is also expected to issue listing decisions on species in the way of certain mining operations. Most prominently, the agency is expected later this year to determine whether to list Tiehm’s buckwheat — a rare wildflower in Nevada that’s in the path of Ioneer Ltd.’s Rhyolite Ridge proposed lithium mine — should be protected under the Endangered Species Act (Greenwire, Dec. 17, 2021).