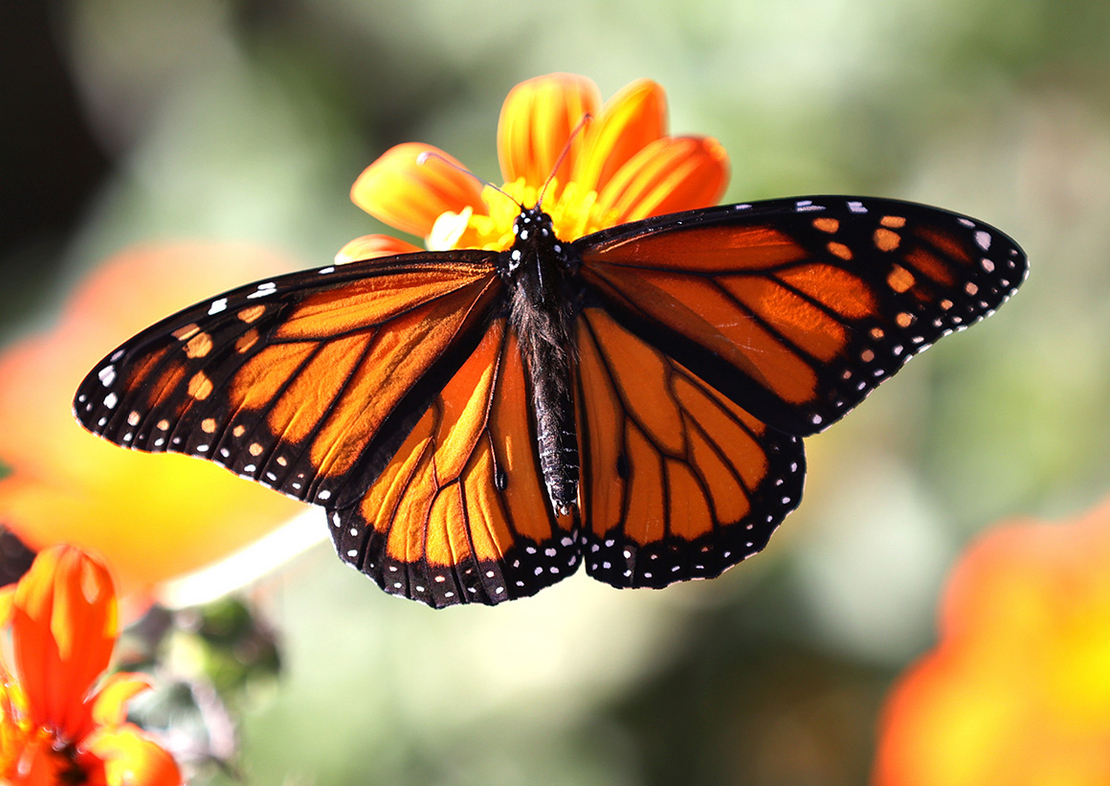 A monarch butterfly on a flower. Justin Sullivan/Getty Images

An international organization today identified the migratory monarch butterfly as one of the world’s endangered species, in a message-sending move that the Fish and Wildlife Service still hopes it can avoid having to duplicate.

Capping an extensive study, the Switzerland-based International Union for the Conservation of Nature said it is adding the monarch to the “red list” of threatened and endangered species.

“Today’s Red List update highlights the fragility of nature’s wonders, such as the unique spectacle of monarch butterflies migrating across thousands of kilometers,” IUCN Director General Bruno Oberle said in a statement.

With the addition, the monarch becomes one of 147,517 species on the list, of which 41,459 are considered to be threatened with extinction.

The migratory monarch is a subspecies of the monarch butterfly and is renowned for its journeys from Mexico and California in the winter to summer breeding grounds throughout the United States and Canada (Greenwire, Dec. 23, 2015).

Logging and deforestation in Mexico and California has cut habitat, while pesticide and herbicide use has killed milkweed, the plant that feeds the larvae of the butterfly.

Climate change and the accompanying drought has further limited the growth of milkweed and severe weather has killed “millions of butterflies,” according to the IUCN.

Earlier this year, the Xerces Society for Invertebrate Conservation said it counted about 247,000 monarchs overwintering in California after seeing fewer than 2,000 the year before (Greenwire, Jan. 26).

“It is difficult to watch monarch butterflies and their extraordinary migration teeter on the edge of collapse, but there are signs of hope,” said Anna Walker, a species survival officer at the New Mexico BioPark Society who led the assessment.

In an email, Walker told E&E News this afternoon that “the assessment process took quite a while,” beginning several years ago.

“We reviewed almost 100 publications on the species and a lot of species experts were involved,” Walker told E&E News. “There were not too many surprises, the declines in this subspecies have been ongoing for decades and they have been well publicized.”

Walker added that “the IUCN Red List does not directly influence policy in the United States, but I hope it will help maintain some of the momentum that has been building in Monarch conservation over the last few years.”

Established in 1948, the IUCN now has more than 1,400 governmental and nongovernmental members. Its red list designations do not have formal regulatory clout within the United States.

“It’s heartbreaking that monarch butterflies are now classified as endangered by the IUCN red list,” said Stephanie Kurose, senior endangered species policy specialist at the Center for Biological Diversity. “The Fish and Wildlife Service must stop sitting on its hands and protect the monarch butterfly under the Endangered Species Act right now, instead of hiding behind bureaucratic excuses.”

The Fish and Wildlife Service said in a statement this afternoon, “Under the ESA, monarchs remain warranted but precluded by listing actions of higher priority. The monarch is a candidate for listing at this time and has been added to our national listing workplan, which prioritizes listing actions based on degree and immediacy of threats.”

In hopes of avoiding that fate, the Interior Department recently announced it is establishing a new Pollinator Conservation Center.

“The Center for Pollinator Conservation will have dedicated staff, including a leadership position, a Western monarch coordinator and other capacity focusing on science, communications and partnership development,” FWS told E&E News.

The agency added that it will “consider additional positions as the center evolves” and said that FWS is “also exploring ways to leverage shared capacity with other agencies and partners.”

FWS said that no specific individuals have yet been assigned to the new position.

In other decisions announced today, the IUCN reported that 100 percent of the world’s remaining 26 sturgeon species are now at risk of extinction, up from 85 percent in 2009.

Sturgeons have been overfished for their meat and caviar for centuries. Despite being protected under international law, poaching continues to affect more than half of these species.

The IUCN also reported that there are now between 3,726 and 5,578 tigers in the wild worldwide. The 40 percent increase since the last tiger assessment in 2015 is the “result of improvements in monitoring, showing that there are more tigers than previously thought, and the number of tigers globally appears to be stable or increasing,” according to the organization.