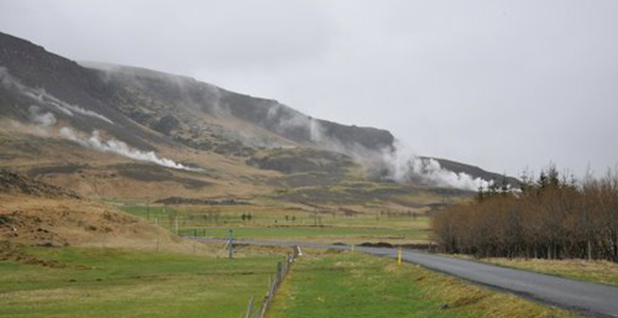 Steam rises from hot springs near a resort area of Iceland where the methane-making archaea were collected. Google Earth

GOLDEN, Colo. — What may become one of the most disruptive renewable energy experiments in recent history is taking shape behind a building here in an assemblage of girders, pipes and tanks. It’s called a bioreactor, but has the look of an unfinished project built with pieces from a giant erector set.

It’s the apparatus of an ambitious goal: to make a renewable form of natural gas, which chemists also call methane. Instead of being produced from underground fossil fuel deposits, the methane from this machine will come from a two-step process. First, supplies of cheap solar and wind-powered electricity will be used to split hydrogen from water. Then the hydrogen will be combined with carbon dioxide, the otherwise troublesome greenhouse gas.

The bioreactor will subject this gaseous mix to pressure, plus the metabolisms of an unusual and very obliging community of tiny microbes called archaea. These bugs catalyze a reaction that turns the hydrogen and CO2 into a renewable form of methane that could be stored in great quantities in the globe’s existing natural gas pipeline systems. That kind of storage could provide a cleaner fuel almost anywhere it is needed.

Within a century or two, the world’s natural gas supplies might be depleted, predicts Kevin Harrison, an engineer who is overseeing this "Power to Gas" (P2G) experiment here at the National Renewable Energy Laboratory (NREL).

"It would be nice to leave some of that underground," Harrison said, referring to naturally occurring methane, which also becomes a powerful global warmer when it leaks into the atmosphere.

P2G could be disruptive because it upends the current system. Instead of burning natural gas to make electricity or heat, it would use renewable electricity and carbon dioxide — that would otherwise be emitted into the atmosphere — to make natural gas. The Department of Energy, which has used NREL to spur cheaper supplies of wind and solar power over recent years, sees the resulting gas as one way to avoid expensive renewable energy storage systems that use hydrogen, electric batteries and molten salt. If it works, the storage system for this methane is already built and paid for.

Like many stories in the scientific saga to remove problems posed by climate change, this one features improbable beginnings and blind alleys. The archaea were discovered by a group of Swiss engineers lounging at a hot springs resort in Iceland in the 1970s. They found what appeared to be bacteria that were producing the springs’ 150-degree-Fahrenheit temperatures. They isolated one strain and deposited it in a collection of curious microorganisms in Germany.

The developer of the archaea catalyst chosen for P2G is Laurens Mets, a molecular biologist at the University of Chicago. He wants to see it demonstrated here at NREL because he was forced to develop the process in Europe. To some Americans, his project has a fairy tale aspect to it, an aura that he wants to dispel. "People who don’t believe it can go in and watch it in action," he said in an interview.

He started his research in the 1990s, when many scientists thought that the next breakthrough in clean energy would involve just the first step: to store renewable energy as hydrogen and distribute it in that form. Some scientists still refer to the expanded idea as the future "hydrogen economy." At the time, Mets was struggling with a process that used light beams to coax algae to produce hydrogen, but he began having doubts about whether hydrogen, a tiny, flammable atom that can work its way into most metals, could be stored safely and cost-effectively.

He decided to refocus his efforts on archaea, microbes that resemble bacteria, but are smaller and genetically quite different. Their metabolism produces heat and methane, which Mets knew could be stored. Methane contains 3 ½ times more energy than hydrogen. But Mets heard reports that the bugs he found couldn’t be trusted to scale up their methane production because they would use more of it to grow, and that the process could be poisoned by nearby oxygen.

But after testing them in his Chicago laboratory, Mets concluded that these reports were "urban myths." His archaea didn’t divert much methane into their bodies and were very tidy, scrupulously removing oxygen from their surroundings. As he put it: "We brought in a whole bunch of these strains to compare and settled on this one group that seemed to be extremely efficient. They need almost nothing. We feed them hydrogen and carbon dioxide."

With help from the University of Chicago’s Polsky Center for Entrepreneurship and Innovation, which commercializes promising technologies developed by its researchers, Mets obtained a patent on the selected strain and formed a company called Electrochaea in 2010. The business set up offices in St. Louis.

But then he found himself in what seemed to be another blind alley. The process of hydraulic fracturing, a relatively new method of drilling for natural gas, was producing so much fuel that by 2010, the U.S. price of natural gas began to drop by as much as 60 percent. Not many Americans were interested in a sketchy idea that promised a more expensive form of natural gas.

"The economics really went in the tank," Mets recalled.

But Mich Hein, an "entrepreneur-in-residence" working at the Polsky Center, became CEO of Electrochaea and discovered a much different situation evolving in Europe. In Denmark, which had begun to produce a considerable amount of wind-powered electricity, natural gas prices were climbing. The country relied on supplies from wells in the North Sea, which were being depleted, posing the possibility that it might have to depend on buying future natural gas supplies from Russia. Sweden and Germany were worried about the same problem.

Hein, who had previously organized some small biotechnology companies, worked up a pitch to sell archaea. Most biotech processes, he explained, don’t scale up. "We tend to take microbes that can do X and try to get them to do Y. And they can do that if you beat them with a stick, but as soon as you stop doing that, they’ll stop doing Y and go back to making X," he said. "But these guys [archaea] want to do Y for a living."

Energinet, Denmark’s state-owned operator of its electricity and natural gas systems, was intrigued. It had excess wind power, and it helped finance an experiment with Electrochaea at a Danish university. When that worked, Energinet found partners to help finance a larger experiment just outside Copenhagen that fed the bugs CO2 from a local sewage plant. They devoured it.

Hein found venture capital partners in Munich, where he helped set up a European headquarters. Then he found a utility in Hungary, Magyar Villamos Muvek, that agreed to build a 10-megawatt pilot facility, the first commercial-sized plant that produces renewable natural gas.

Another selling point, Hein discovered, was that Europe is seriously considering carbon taxes to help reduce greenhouse gas emissions. That brought in Audi AG, the German carmaker, as an investor. According to Hein, it had worked out the math and found that lowered carbon emissions would give it a tax break to sell its Audi A3 Sportback, which, like many cars, can run on gasoline or, with some adjustments, on natural gas.

Finally, in 2017, the heroic feats of Mets’ bugs began to raise eyebrows in the United States. Southern California Gas Co., or SoCalGas, has over 21 million customers. It is the largest natural gas distributor in the United States and is located in a state that encourages low-carbon fuels and where many electric utilities have more available solar and wind power than they can sell.

SoCalGas is partnering with NREL to build the bioreactor that is taking shape here. "We’re helping with the study of this technology because it may offer the potential to use a natural gas distribution system as a utility-scale storage for excess wind and solar electricity generation," SoCalGas said in a statement to E&E News.

"It holds the potential to be a tool to support the expansion of our wind and solar energy resources to meet California’s electricity needs around the clock. Additionally, it could drive economic growth in the Western U.S. by helping to optimize the region’s electric and gas grid operations," SoCalGas added.

But even that may not be the end of this renewable energy fairy tale. According to Harrison, the engineer at NREL, an animal feed company that he would not name wants to use NREL’s bioreactor when SoCalGas, which owns it, is finished with it. The feed company’s goal is to see if the bugs would make a basic and more expensive cattle and chicken feed ingredient: amino acids.

Mets, the inventor, says he has no interest in amino acids but intends to focus more research on getting his bugs to make precursors for jet fuel and gasoline. Finally, Hein, who directs Electrochaea, says he has been having "extended discussions" with owners of wind farms and promising wind farm sites in Canada, West Texas and Iowa that have no nearby connection to the electric power grid.

But they might become commercial if they turned their electricity into methane, which can be piped or trucked.

"What we’re looking at here," he said, "is the missing link in the renewable energy portfolio."