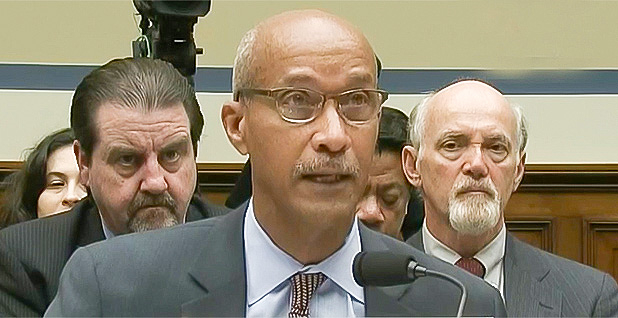 Patrick Sullivan (left), head of investigations for the EPA Office of Inspector General, has retired from the agency's watchdog office. C-SPAN

A top investigator who faced questions over growing threats against former EPA Administrator Scott Pruitt and his expansive security has left the agency.

Sullivan is now in Dublin. On July 2, he was appointed as a commissioner on the Garda Síoch´na Ombudsman Commission, an independent body that provides oversight of the Irish police force. Sullivan started work for the commission on Tuesday, according to GSOC spokeswoman Claire Grady.

"This job as commissioner with GSOC is an extremely prestigious position. I am honoured to have been appointed after an international competition, and I see having the opportunity to serve here, with GSOC, as the pinnacle of my career," Sullivan said in a statement shared with E&E News.

The IG has begun searching for a permanent replacement for Sullivan, posting a job ad for the position, whose annual pay ranges from $126,148 to $189,600, with occasional travel required to support investigations.

EPA’s inspector general has opened up several more threat investigations related to Pruitt compared with his Obama-era predecessors at the agency. Sullivan told reporters that Pruitt was facing a deluge of threats as EPA administrator.

"He has had significantly more threats directed against him. There’s absolutely no question about it," Sullivan said in one interview with E&E News (Greenwire, Jan. 11).

But while threats against Pruitt may have poured into EPA, the gravity of those threats were questioned by observers.

IG investigations later determined that several were not actual threats against the past administrator and instead were people expressing political views or displeasure with Pruitt. In one instance, Sullivan said, the IG was called in by Pruitt’s security detail after protesters disrupted one of the EPA chief’s speeches last year, but investigators found they weren’t a threat.

Pruitt resigned last month after coming under increasing scrutiny for alleged misuse of his office and exorbitant spending.

EPA’s inspector general opened up several reviews related to Pruitt’s tenure at the agency, including an audit of spending on his personal security detail. The IG might release its report on the matter this month.

Pruitt had 24/7 security when he was EPA administrator. His around-the-clock protective detail was more comprehensive than his that of predecessors at the agency, leading to roughly $3.5 million in its payroll and travel costs during his first year in office.

Pruitt’s successor at EPA, acting Administrator Andrew Wheeler, has taken on a smaller security presence and doesn’t have a 24/7 protective detail.

Last August, Sullivan drafted a memo summarizing threats against Pruitt, which would later leak without authorization to the media. Pruitt would cite Sullivan’s memo in congressional testimony as justification for his increased security.

EPA IG Arthur Elkins distanced his office from security decisions made for Pruitt, saying the watchdog played no role in them. In letters to Sens. Tom Carper (D-Del.) and Sheldon Whitehouse (D-R.I.), Elkins indicated that Pruitt had requested 24/7 security. Emails subsequently released show senior officials on President Trump’s "beachhead" team at EPA and for Pruitt were involved in the decision for around-the-clock protection.

Elkins also said in his letters to Carper and Whitehouse that Sullivan had recused himself from any investigations involving Pasquale "Nino" Perrotta, the EPA special agent who led Pruitt’s security detail who retired earlier this year after coming under heavy scrutiny for the former administrator’s security and travel spending. Elkins said Sullivan recused himself "out of abundance of caution because of his professional relationship" with Perrotta.

The New York Times had reported Perrotta had drinks with Sullivan and others at a bar near EPA headquarters but later corrected its story to say Perrotta had not attended the gathering. The newspaper also said Perrotta and Sullivan both worked but did not serve together in the Secret Service.

Citizens for Responsibility and Ethics in Washington, a public interest watchdog group, had requested an investigation into Sullivan but withdrew its request after the newspaper corrected its story.

Grady with GSOC said none of the controversy surrounding Pruitt played into Sullivan’s decision to retire. Instead, he was facing mandatory retirement as a federal law enforcement officer in January 2019 and had begun searching for new employment.

In December 2017, Sullivan learned of the opportunity with GSOC. Grady said he applied for the job through an open competition run by the Irish government Public Appointments Service that attracted applicants from several countries.

Sullivan had two interviews for the job — one in January, the other in February — and his selection was approved by the Irish parliament in June. Grady noted that Sullivan’s application for the job and his first interview came before his recusal related to Perrotta.

Sullivan joined the EPA IG’s office in 2011. During his time with the EPA watchdog, he testified before Congress on misconduct by EPA employees and helped uncover some big cases at the agency. He worked on the investigation into John Beale, the former senior EPA official who impersonated a CIA spy and served jail time for fraud.

Sullivan has had a long career in U.S. federal law enforcement, including more than 20 years in the Secret Service. He has also worked for the Federal Air Marshal Service and the Government Accountability Office.