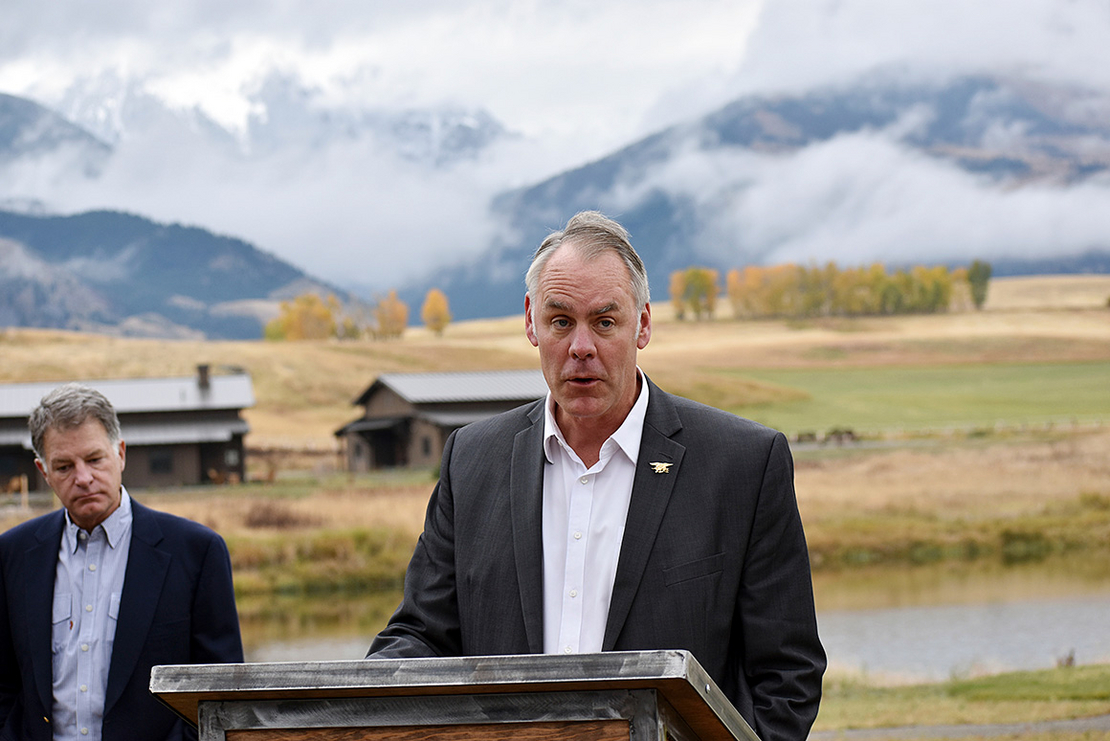 Former Interior Secretary Ryan Zinke “failed to abide by his ethics obligations” when he worked closely with developers of a project that involved a foundation he established in his hometown of Whitefish, Mont., investigators reported today.

Zinke also “did not comply with his duty of candor when questioned” by the department’s ethics official about the project, investigators said.

In a much-awaited report, Interior’s Office of Inspector General further concluded that Zinke “misused his official position in violation of federal regulations” by directing his subordinates to assist him with private matters.

“We referred our findings to the U.S. Department of Justice, which declined prosecution of this matter in the summer of 2021,” the IG office reported.

The sharply critical report caps an inquiry that began during the Trump administration, when the former Navy SEAL was serving as President Trump’s first Interior secretary. Facing more than one ethics inquiry, Zinke resigned. He is now running as a Republican candidate for one of Montana’s two House seats (Greenwire, Oct. 31, 2018).

A statement from the Zinke campaign said it had not yet seen the report. “A Biden administration-led report published false information, and was shared with the press as a political hit job — real shocker,” said the statement.

While noting some of Zinke’s failings, the new report also concluded that investigators “did not substantiate the allegation that Secretary Zinke violated federal conflict of interest laws.”

The report explores a real estate deal and projectcalled 95 Karrow in Whitefish, Mont., first reported on by POLITICO in 2018. The article said the group was funded by David Lesar, then-chair of oil services giant Halliburton.

The deal involved a foundation created by Zinke and his wife in his hometown of Whitefish — a foundation formed to provide a sledding park for children and community open space in a setting that recognized the contributions of veterans.

The Great Northern Veterans Peace Park Foundation was established in 2007.

In 2008, BNSF Railway donated 4.892 acres of land in Whitefish to the foundation to establish the park. Zinke was the foundation president until he formally resigned from that position in March 2017 upon his confirmation as Interior secretary.

An annual report filed with the Montana secretary of state on April 14, 2017, stated that Zinke’s wife was the foundation president, and Ryan Zinke was listed as both a “director” and “other officer.”

95 Karrow LLC was established as a Montana limited liability corporation in 2017 to create a mixed-use development consisting of a hotel, microbrewery, restaurant and other businesses.

Investigators obtained about 64 emails and text messages dated Aug. 21, 2017, through July 30, 2018, in which Zinke communicated directly with the developers about the 95 Karrow project.

“Secretary Zinke, his wife, and the 95 Karrow project developers, through their attorneys, declined our requests for an interview in this matter,” the investigators noted.

The report said investigators found no evidence that Zinke “took any official action to specifically benefit the Halliburton company.”

But investigators did find that Zinke “played an extensive, direct, and substantive role in representing the Foundation during negotiations with the 95 Karrow project developers” and that “many of these communications contained substantive discussions about specific design issues related to the 95 Karrow project, including the developer’s proposed use of the Foundation property for a parking lot and Secretary Zinke’s apparent interest in operating a microbrewery onsite.”

Investigators noted that after one meeting, “Zinke provided the developers with a personal tour of the Lincoln Memorial and then ate dinner with them at a local restaurant.”

At another point, investigators found that in April 2018, a reporter from a news organization contacted a developer inquiring about Zinke’s role in the 95 Karrow project and that “Zinke exchanged approximately 37 text messages with Developer 1 in which they discussed how to respond to the news organization’s inquiries.”

After seeing one of the resulting news articles, the department’s ethics officer interviewed Zinke in July 2018 about his involvement in foundation matters. He denied involvement.

“The [official] expressed the belief that the emails showed Secretary Zinke had participated in negotiations with the developers about the 95 Karrow project, and that the Secretary had ‘misrepresented’ the facts … about his participation.”

The investigators added that the ethics official “told us that Secretary Zinke’s statements were ‘very disappointing … and very concerning’ because [he] had made it clear to the Secretary that the Secretary had to tell the truth for the DOI Ethics Office to determine if there was an ethics violation.”

“We believe that the level and extent of Secretary Zinke’s engagement with the developers on issues pertaining to the Foundation generally and the 95 Karrow project in particular make it unlikely that he would have forgotten or misconstrued his role,” the investigators said.

The statement from the Zinke campaign complained that investigators did not talk to him, “staff or anyone else who was supposedly involved in the non-existent ‘negotiations.'”

“Only in Biden’s corrupt administration is talking to one’s neighbor about the town’s public meetings and history of the land a sin. The Zinke family was able to create a free and open space for people to enjoy in Whitefish,” the statement said. “They are proud of the children’s sledding park that dozens of kids use every weekend and countless locals use for exercise every day.”