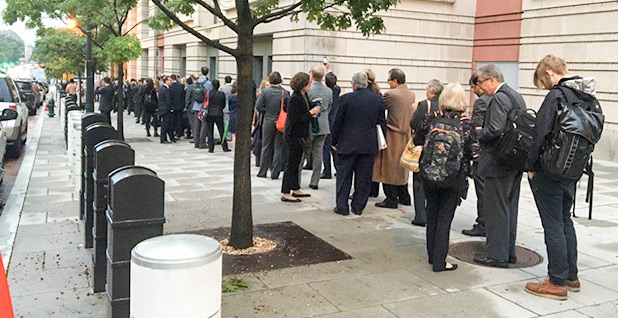 Hordes of administration officials, lawyers and reporters swarmed into a federal appeals court today for what’s been dubbed the “Superbowl” of climate litigation. Photo by Robin Bravender.

Several conservative judges suggested that Congress — not U.S. EPA — should be tasked with making major environmental policy decisions. They cited one of Scalia’s last major environmental opinions as a possible frame for viewing this case, which may not bode well for the administration.

Oral arguments in the massive lawsuit challenging the rule to limit power plants’ greenhouse gases began in the U.S. Court of Appeals for the District of Columbia Circuit, which took the highly unusual step of having its 10 active judges — excluding Supreme Court nominee Merrick Garland — preside. Those arguments are expected to continue throughout the day.

The Washington, D.C., courthouse was jammed with energy and environmental officials, lawyers and reporters as arguments began, with some people waiting in line before sunrise to ensure they got a seat.

First up this morning, judges pressed the administration and its challengers on whether EPA has the authority under the Clean Air Act to implement the Clean Power Plan, which aims to slash power plants’ greenhouse gas emissions by 32 percent from 2005 levels by 2030.

Central to the arguments was the 2013 decision in Utility Air Regulatory Group v. EPA, in which Scalia wrote, "When an agency claims to discover in a long-extant statute an unheralded power to regulate ‘a significant portion of the American economy,’ … we typically greet its announcement with a measure of skepticism. We expect Congress to speak clearly if it wishes to assign to an agency decisions of vast ‘economic and political significance.’"

In that case, the high court found that EPA had inappropriately used the Clean Air Act to issue a rule that required certain facilities to obtain air pollution permits for greenhouse gases.

"It might have been written with this case in mind," said Judge Brett Kavanaugh, a George W. Bush appointee who has been critical of other Obama administration air pollution policies. He said the administration’s rule is "fundamentally transforming an industry," and "Congress should be making the big policy decisions" or clearly delegate them to federal agencies in laws.

Kavanaugh added that EPA’s objectives on the policy side are "laudable," given the challenges posed by climate change. And "I understand the frustration with Congress," he added. "Everyone understands that."

Judge Thomas Griffith, another George W. Bush appointee, questioned why the fight had arrived in their courtroom at all and wasn’t instead playing out on the floor of the Senate. He said the administration had made it clear that it was looking to circumvent Congress with its regulation. President Obama said, "Congress isn’t acting, so we will act," Griffith said. He joked at one point that the case must be important because he had heard about it on NPR this morning.

At the heart of the Clean Air Act debate is whether the law affords EPA the authority to interpret the law in the way it did with the Clean Power Plan. Courts typically grant federal agencies deference, known as Chevron deference, when interpreting laws. Regulating large sources of greenhouse gas emissions under the Clean Air Act has presented unique challenges for EPA, because the act doesn’t explicitly state how to tackle carbon dioxide. However, the Supreme Court has determined EPA has authority to limit greenhouse gases using the act.

In Utility Air Regulatory Group v. EPA and in this case, challengers argue that for rules having so much impact, Congress must "speak clearly," as Scalia put it, for decisions of such "economic and political significance."

West Virginia Solicitor General Elbert Lin and Peter Keisler of Sidley Austin, representing EPA’s opponents today, argued that the agency had stepped far out of bounds with this rule.

"What this is doing is very different from what Section 111(d) [of the Clean Air Act] is all about," Lin told the judges.

Keisler argued that the Clean Air Act does not give the agency the authority to design performance standards for power plants in a way that would force the owner of the facility to invest in renewable technologies — which is one way to come into compliance with the rule.

Judge Nina Pillard, an Obama appointee, questioned whether EPA’s rule was that far off from previous regulations requiring pollution controls. If a power plant had to buy a scrubber, for example, the plant would be subsidizing another industry creating coal scrubbers. "I think that’s part of our understanding of how regulation works," she said.

Several judges questioned whether the rule was as "transformative" as challengers assert.

Judge David Tatel, a Bill Clinton appointee, said it appeared as though EPA was invoking established authority when it issued its rule.

"Mass. v. EPA changed the calculation," he said, referring to the 2007 Supreme Court decision holding that EPA had the authority to regulate greenhouse gases under the Clean Air Act.

Eric Hostetler of the Justice Department argued that the rule falls squarely within EPA’s authority to control pollution. "It’s about substituting cleaner technologies for dirtier technologies," he said.

Although several of the conservative justices on the court appeared skeptical of Congress’ intent to allow EPA’s regulatory regime, the outcome of the case will be determined by a majority. The judges hearing the case include six Democratic appointees and four Republican appointees, which could be favorable to the Obama administration.

In addition to the debate over EPA’s statutory authority, the court will hear arguments over several other legal challenges in a courtroom drama that’s expected to last the rest of the day.

The Clean Power Plan is currently on hold after being paused by the Supreme Court, and the case is ultimately likely to be heard by the high court. If the high court maintains a 4-4 split along ideological lines, the outcome of the D.C. Circuit case could determine whether the rule is held up or knocked down.