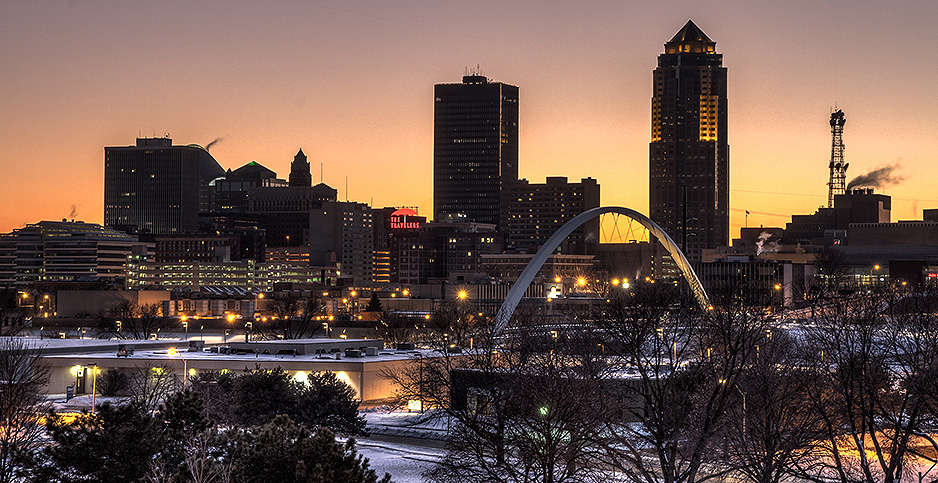 Iowa’s capital has adopted what is thought to be the strongest clean electricity goal of any U.S. city — to run on renewable energy around the clock by 2035.

The resolution requiring around-the-clock clean energy passed despite some earlier pushback by some council members and a warning by utility MidAmerican Energy last month that achieving the goal would lead to steep increases in electricity rates.

Council member Josh Mandelbaum said the city’s legislators found consensus by agreeing to extend the timeline for achieving the goal by five years from 2030, the end date in the resolution debated a month ago (Energywire, Dec. 11, 2020). The council also eliminated language that would have tied the goal to MidAmerican’s franchise agreement with the city.

Even with the concessions, the goal makes Des Moines a model for Iowa and across the country in terms of local governments working to curb power-sector carbon emissions, said Mandelbaum, who in his day job is an attorney for the Environmental Law & Policy Center, a Midwestern environmental advocacy group.

"It’s going to force some real progress from a clean energy standpoint," he said in an interview.

The resolution is significant because while dozens of other cities have 100% renewable energy goals, they can be achieved by offsetting usage with renewable energy credits (RECs), which means coal and natural gas plants can continue to run indefinitely. The goal established Monday, meanwhile, means powering Des Moines with renewable energy around the clock, without dipping into fossil generation even when wind or solar power isn’t available.

While Mandelbaum believes MidAmerican’s multibillion-dollar estimates of achieving the goal are inflated, the work already done by the Iowa utility to become a national leader in wind energy makes it possible to achieve 24/7 carbon-free electricity, he said.

MidAmerican last month said it’s on track to produce enough renewable energy by 2025 — mostly wind — to offset 100% of its customers’ energy use. It will reach 83% of its goal this year, according to preliminary numbers, and the utility expects to be at 90% next year, all while keeping rates well below the national average.

Around-the-clock clean energy "can be done in a cost-effective manner that doesn’t jeopardize affordability and reliability," Mandelbaum said.

MidAmerican didn’t immediately respond to a request for comment on the resolution.

Des Moines Mayor Frank Cownie said establishing the 2035 target represents a big step in the city’s efforts to combat climate change and aligns with goals of the most recent report by the Intergovernmental Panel on Climate Change.

"We’ve seen time and time again how local governments have the burden of dealing with these extreme and more frequent events caused by weather and climate change," he told council members Monday night. "We need to play a bigger role in sustainability, mitigation and adaptation."

Des Moines’ pursuit of an ambitious CO2-free electricity goal grew out of a clean energy initiative by the Iowa Environmental Council. The advocacy group issued a report last year showing the scale of wind, solar and battery storage projects needed to reach 100% renewable electricity in Iowa by 2050.

The study found the state would need between 30,000 and 61,000 megawatts of wind and a minimum of 5,000 MW of solar to eliminate coal and natural gas from its electricity fuel mix.

Kerri Johannsen, energy program director for the group, said in a statement that the resolution "puts us on the right path to address the challenges of climate change — it is both aggressive and achievable, and will help Des Moines attract and retain sustainability-minded businesses and residents."

Des Moines’ goal could put additional economic pressure on aging fossil plants. MidAmerican officials have acknowledged that the utility’s coal plants may continue to run and pump out carbon emissions even as the utility reaches its 100% renewable goal.

Mandelbaum said the next step is for city leaders to develop a timeline and benchmarks for implementation. He also hopes the resolution will inspire other cities to take similar action — particularly those in MidAmerica’s service area.

Ultimately, it should send a clear signal that local governments stand ready to work with the Biden administration on developing climate solutions, he said.

"We want to partner with the new administration," Mandelbaum said. "We want to get things done and make sure that we’re actually going to meet this goal."