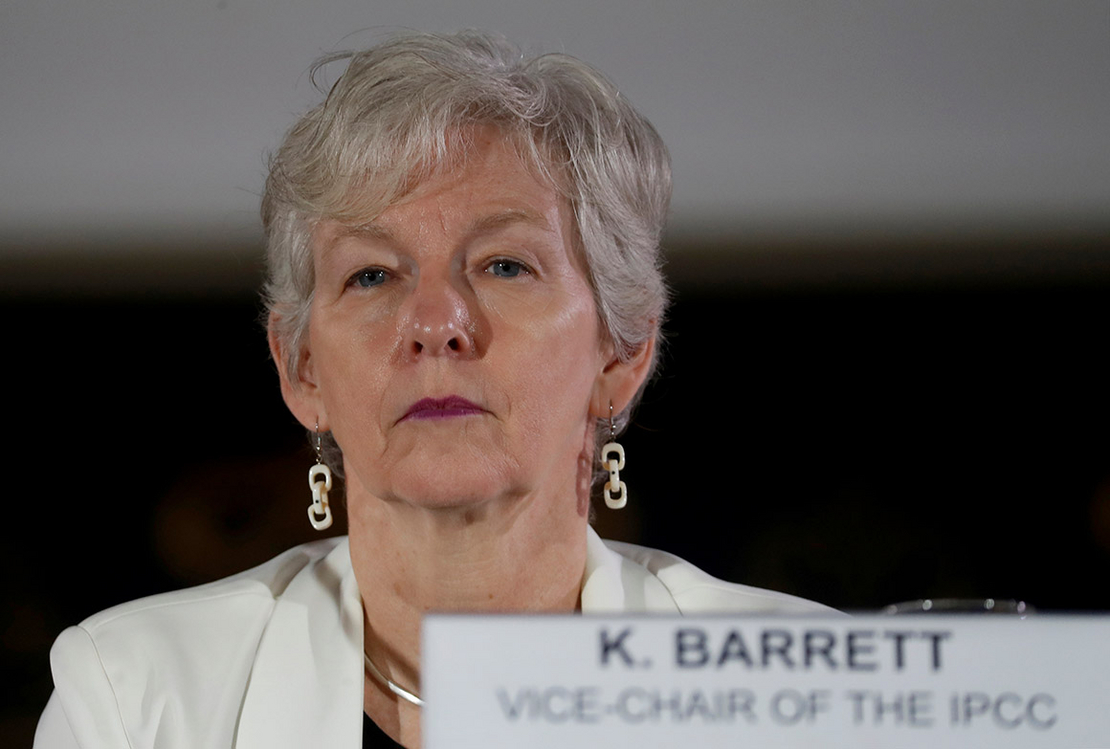 Ko Barrett, vice chair of the Intergovernmental Panel on Climate Change, is leading a push for gender equity at the scientific organization. ERIC GAILLARD/REUTERS/Newscom

For too long, the world’s foremost scientific body on global warming has overlooked the contributions of female scientists and the unique impact of climate change on the planet’s roughly 3.8 billion women, advocates say.

Now the Intergovernmental Panel on Climate Change (IPCC) is looking to change that way of thinking. The U.N. group has vowed to diversify its pool of scientists and sources of information, which could bring greater understanding of how global warming is affecting women — particularly those in frontline communities.

“In the beginning, we were just putting climate change on the map and letting people know there is this phenomenon, and we have some confidence this is happening,” said Ko Barrett, a vice chair of the IPCC and co-chair of its gender action team. “Now people are asking, ‘What does that mean for me and my country?’”

As the IPCC has delved into solutions and responses to today’s climate challenges, people like Barrett have championed the need for more diverse perspectives. That’s likely to be reflected in its next round of reports, she said.

“We’ve been producing IPCC reports for over 30 years, and it’s kind of a voluntary effort that is hugely successful because it draws from across the globe and the reports are accepted and approved by governments, so super influential,” Barrett explained. “But really there are aspects of the organization that we need to do a better job of formalizing.”

That includes a more concerted effort to recognize the value that women are bringing to the process and creating an environment to be more inclusive and respectful.

“It’s also really important for our reports to do a better job of considering those aspects as we assess the issues,” said Barrett.

The next report — an assessment of the physical science behind planetary warming — is scheduled for release Aug. 9. While it won’t have a specific gender component, it will include new regional information and an interactive atlas that will allow for conversations about the risks facing various communities, including those where women are on the front lines of climate change. That could lead to deeper conversations about vulnerability and adaptation, topics tackled in a follow-up report, said Barrett.

Observers expect the next round of assessments — the first since 2013 — to confirm what many have been predicting: That limiting global temperature rise to 1.5 degrees Celsius this century will be immensely challenging.

If that temperature target isn’t met, a 2018 IPCC report predicted dire consequences in the form of more extreme weather and rising sea levels — catastrophes that will have the biggest effect on vulnerable communities in the developing world.

That’s where Barrett’s work on gender comes in.

Currently the deputy assistant administrator for research at NOAA, Barrett has spent much of her career focused on how society adapts to a warming world. For more than two decades, she has reviewed the IPCC reports related to adaptation and vulnerability and participated in the plenary meetings as part of the U.S. delegation.

In 2015, she was one of the first women to be elected vice chair of the IPCC along with Thelma Krug from Brazil.

At the time, she didn’t think much about the nature of her accomplishments as a woman, she said. Now, having served as vice chair for six years, she said she’s realized she is modeling a world where women have positions of authority.

“And you see how important it is to advocate for inclusion and gender equality,” Barrett said.

The IPCC has observed the data about women’s involvement in its work and noted steady progress over time. But it was clear they could do more to improve gender balance, she said.

Since the IPCC came together in the late 1980s, the ratio of female authors has gone from around 3% to just over 30%. This assessment cycle includes more women in leadership positions than in any previous time since the IPCC was formed, said Barrett. “That may have provided a particular opportunity to take a closer look at gender,” she added.

Even before a formal gender policy was introduced, some of the working groups initiated a code of conduct and hosted training for authors on how to value and include diverse perspectives. But those were mostly ad hoc and inconsistent, she said.

In February 2020, the IPCC adopted a policy for gender equality and inclusion and a plan for how to achieve its objectives.

That includes striving for gender-balanced panels or organizing regular gender diversity training for meeting chairs and facilitators. But Barrett thinks the most significant thing the group has done is establish the gender action team she co-chairs with Krug.

The team will monitor whether the IPCC is making progress on achieving its gender objectives, said Barrett — though the pandemic has set back efforts.

For now, they’re focused on surveying current authors and getting feedback before the IPCC’s current assessment cycle ends next year.

They’ll be encouraging more female nominees for the next assessment. But that won’t be easy.

The IPCC depends on scientists from around the world to volunteer their time to author its assessment, which happens roughly every seven years. While the number of women authors is a “healthy improvement” from the early days, Barrett says it’s still not representative.

One barrier is that women globally remain underrepresented in the science, technology, engineering and mathematics fields, which limits the pool from which they can draw authors.

Another, and arguably greater, challenge is that the IPCC depends on representatives from member countries to nominate the authors, Barrett explained.

“If those countries don’t give us a balanced nominee group, then we really are struggling,” she said.

Striving for a gender balance also goes hand in hand with the need to increase developing country participation, she added.

As with women, the IPCC’s reports have come to include more authors from the developing world, but both more women and more developing countries’ perspectives are needed to show the extent of the climate change challenge.

“If you think about an issue as complex as climate change, a global phenomenon requiring global action … you need diverse perspectives to look at that problem from every angle and to consider a diversity of solutions,” Barrett said.

Having a range of perspectives also helps compensate for unconscious bias or fill gaps in knowledge — allowing for a stronger, more complete assessment of the topic, she added. “So leaving women or leaving developing countries out of the equation is, frankly, scientifically stupid.”

Research backs up her point.

In many countries and societies, women are responsible for producing food, collecting water for their households and gathering fuel for cooking. Climate-driven events such as floods, droughts and severe weather have made these tasks harder and put a disproportionate burden on women.

“Worldwide, women have less access than men to resources such as land, credit, agricultural inputs, decision-making structures, technology, training and extension services that would enhance their capacity to adapt to climate change,” the report says.

Yet women have been at the forefront of climate change solutions and adaptation.

“Across sectors, women’s innovations and expertise have transformed lives and livelihoods, and increased climate resilience and overall well-being,” according to an issues brief from the International Union for Conservation of Nature.

By looking at a broader range of scientific literature, Barrett says, they’ve also realized there are some science fields — such as behavioral science — with higher proportions of women.

“And learning how people perceive risk and therefore might act is tremendously important for us to consider,” she said.

Part of what makes the IPCC reports so resonant is that governments from around the world accept and approve them. It’s also why it’s important to recognize the value women bring to the process and create a more inclusive environment, said Barrett.

Over the years, the IPCC has tried to embrace broader literature as it assesses the changing climate. That can be tough given how formal and scientific the assessment process is. But Barrett warned that perspectives can be missed if the focus is only on peer-reviewed studies.

She lived abroad for several years, with stints in Egypt and Ukraine, and traveled extensively as a climate change adviser with the U.S. Agency for International Development. It’s those life experiences that helped Barrett realize that while women’s voices aren’t always represented in formal literature, they are often very powerful at a community level.

They’ve also added value to the IPCC process. In agreeing on the outline for the 2018 report on 1.5 C, for example, Barrett said there was a core group of women who encouraged them to think beyond the technological transformations that would be required and assess the human aspects of those shifts.