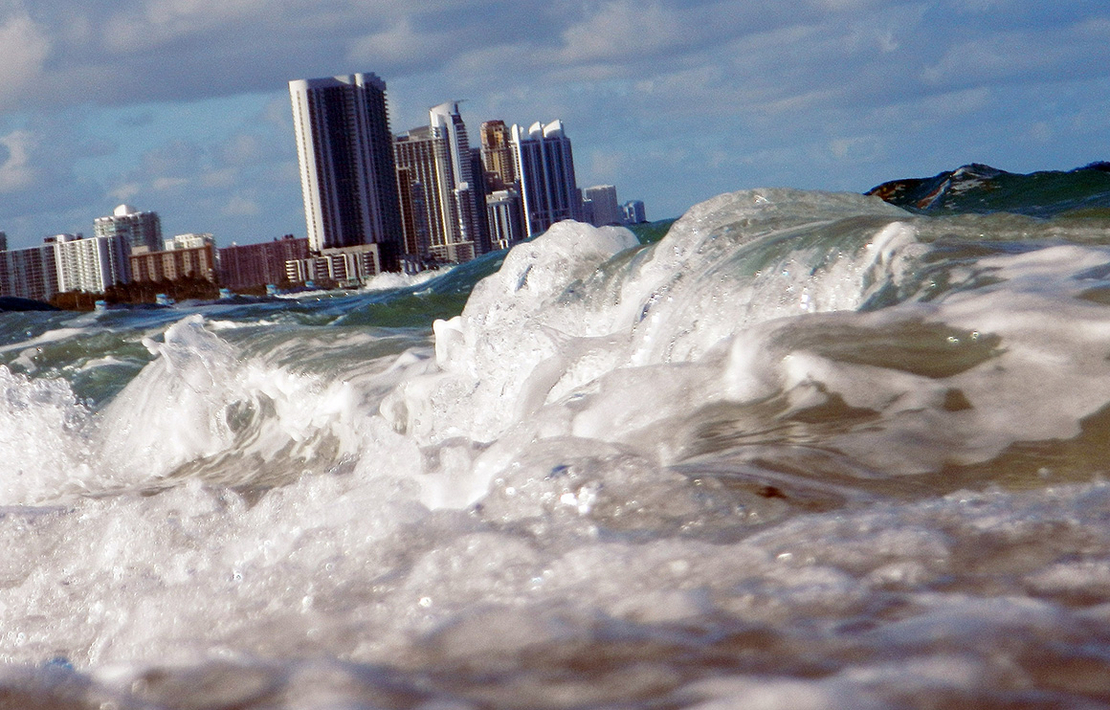 Miami-Dade County, Fla., could be one of the most susceptible places when it comes to rising water levels due to global warming. A new report from the Intergovernmental Panel on Climate Change warns that no place on Earth will be unaffected by climate change. Joe Raedle/Getty Images

Yesterday’s landmark climate report offered a clearer picture of what’s already happened, where we’re headed and how the impacts of global warming will vary by region.

It’s the first time the report by the Intergovernmental Panel on Climate Change included specific regional information and a digital atlas that allows users to drill down into more local data.

“Climate change is already affecting every region of our planet, and every fraction of additional warming will increasingly affect every region in multiple ways,” said Valérie Masson-Delmotte, a co-chair of Working Group I, which produced the report.

A third of the report is dedicated to regional climate information. Much of it focuses on what will have a direct impact on societies or ecosystems, like extreme heat or dry conditions. That information provides some additional reality for decisionmakers and allows for more practical applications, scientists said.

“Policymakers will have a lot of information that they possibly didn’t have until this report came out, and they can assess more immediately what the picture is for their own countries and regions,” said Claudia Tebaldi, an earth scientist at the Pacific Northwest National Laboratory and author of the last chapter on regional impacts.

That chapter aims to better connect this report to one the IPCC’s Working Group II will put out next year on adaptation and vulnerability.

“The IPCC tries to give the best information possible to policymakers,” she added. “By having such detail and such confidence in what is already happening as a consequence of climate change, the message is as compelling as can be.”

Masson-Delmotte said the authors were careful to explain the science in the clearest possible way in hopes it can be used to improve public understanding of climate shifts and so decisionmakers could develop responses.

“We know what must be done to limit global warming — consign coal to history and shift to clean energy sources, protect nature, and provide climate finance for countries on the front line,” he said.

Other leaders were mostly mum, including those from China and India, the world’s largest and third-largest emitters of greenhouse gases. Neither has submitted new targets that outline how they plan to boost their climate objectives, and many advocates and green groups are calling on them to deliver.

Meanwhile, some small island states like the Marshall Islands and Costa Rica, and smaller developing countries such as Ethiopia, have stepped up and adopted net-zero carbon targets and ambitious carbon-cutting pledges.

“Even though they’re the ones that are struggling the most to actually cope with the impacts of climate change,” said Helen Mountford, vice president for climate and economics at the World Resources Institute. “They stepped forward because they knew there was no alternative."

Mohamed Nasheed, former president of the Maldives and an ambassador for the 48-member state Climate Vulnerable Forum, echoed that sentiment in a tweet yesterday.

“This report is devastating news for the most climate-vulnerable countries like the Maldives," he wrote. "It confirms we are on the edge of extinction. Climate emergency is intensifying, we are on the front lines. Our nations are already battered by extreme climate.”

The fact sheets project impacts at 1.5, 2 and 4 degrees Celsius of average global warming and observed impacts, indicating that changes are already a reality.

Here’s what the fact sheets say about impacts in five regions:

Asia
Heat will sweep through the region in the future, with greater heat extremes already evident. Fire seasons will be longer and stronger even as precipitation increases — what’s known as weather whiplash. Glaciers will decline as runoff accelerates in the coming decades. At the same time, sea-level rise is faster than the global average, leading to coastal land loss and heightened erosion.

In north Asia, increased precipitation will flood major Siberian rivers by 2050. South Asia will see more monsoon rainfall, while a combination of climate change, sinking land and human activity will spur floods that will engulf the Mekong Delta. Strong tropical cyclones that have grown more severe in East Asia will likely migrate toward the poles.

Mountains
The mighty Himalayas, Swiss Alps and central Andes have already been warming. Glacial retreat, observed across almost all mountain ranges, has grown faster there since the 1990s. Even if temperatures stop rising, glaciers will continue to melt for at least several decades. That could drive runoff from larger glaciers.

Those changes and others will damage water supply, hydropower production, agriculture and forestry, and ecotourism. In the Caucasus, the wearing down of permafrost has made mountain slopes less stable. More heat and precipitation could increase landslides and floods caused by bursting dams that hold back glacial lakes in the mountains of Asia. In the Rocky Mountains, those lakes are likely to grow as glaciers melt.

North and Central America
Most of the region has seen greater warming than the global mean, with warming and extreme heat expected to continue rising. Sea levels will also rise in most places outside Alaska and the Hudson Bay, where coastlines are high above the water. Tropical cyclones and severe storms will likely become more extreme. Central and western North America, already witnessing more deadly wildfires, will see more blazes and drought as well as more extreme precipitation and flooding. The Caribbean and much of Central America will see continued droughts, too, but scientists anticipate a decline in rainfall.

Polar
Both the Greenland and Antarctica ice sheets have lost mass since the 1990s, with the highest rate of loss over the past decade. The Arctic has seen a rise in extreme heat events since 1979, and future warming that is projected to thaw Arctic permafrost could release more CO2 into the atmosphere. Current Arctic sea ice cover is at its lowest level since the mid-1800s. Before 2050, regardless of warming levels, the Arctic is projected to be practically ice free at least once during the summer months.

Rising seas combined with storm surges and powerful waves will inundate coasts and likely drive salt water into aquifers that many communities depend on for water supplies. Small islands will likely face fewer but more intense tropical cyclones, with the exception of the central-north Pacific. Even under the lowest-emissions scenario, sea-level rise could average half a meter by the end of the century.