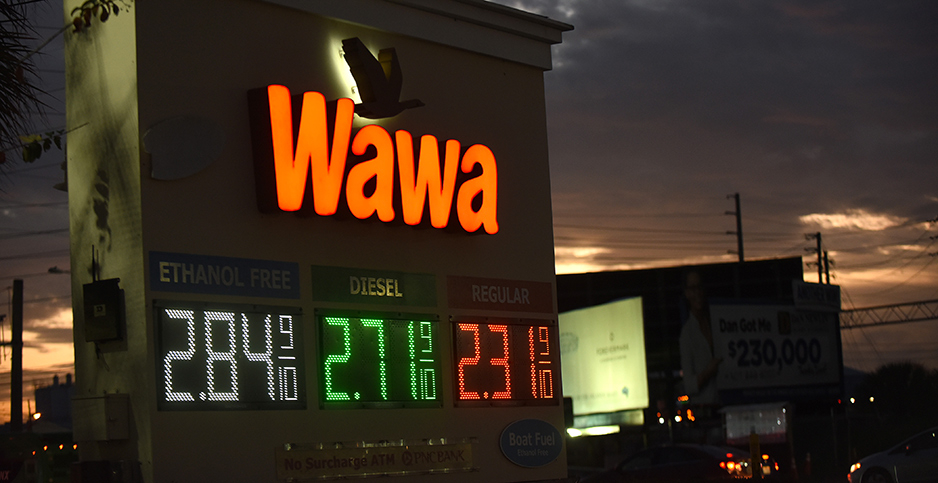 President Trump has long believed the fraught path to electoral victory is dotted with gas stations.

For years, Trump has focused on gasoline prices that consumers pay at the pump, claiming that voters will reward, or punish, presidents who cost them more or less to fill up their cars. Now as tensions rise between the United States and Iran, the world’s fourth-largest oil producer, observers say Trump is closer to experiencing something he has long feared: rising gasoline prices.

While in office, Trump has given himself credit when gas prices fall, describing it as a tax break for all Americans. Before his election, Trump blamed high gas prices on his political opponents and said the country should "fire Obama" because Californians were paying more than $4 a gallon.

In August, Trump said low prices were a result of his energy policies and claimed Democrats would cause prices to rise again.

"Enjoy the low gas prices over the Labor Day weekend! My energy policies have made America energy independent while keeping prices low, just like a Tax Cut," he wrote on Twitter. "The Democrats ‘green’ policies will raise your price of gas!"

In January 2019, Trump said it wasn’t "just luck" that gas prices were falling.

Contrast that to October 2012, a month before President Obama’s reelection. Trump sent a flurry of tweets blaming his predecessor for high gas prices and claimed it would carry an electoral cost.

"California gas prices going thru the roof, others to follow. An election-losing event for Obama," he wrote.

At the time, gas prices averaged about $3.50 per gallon, according to AAA. In California, prices reached $4.61 in October 2012, then plummeted 60 cents by the end of the month.

"Gas prices are at crazy levels—fire Obama!" he tweeted.

Trump isn’t the first president to take credit for low gas prices. Obama did it, too.

"We’re as free of foreign oil as we’ve been in 30 years," Obama told an Indianapolis crowd in 2015. "A lot of families are saving a lot of money at the gas pump, which is putting some smiles on folks’ faces. You’re welcome."

Trump has tried to use his influence as president to keep gas prices down, including pressuring Saudi Arabia to maintain oil production. But gas prices are fickle and can rise abruptly as a result of circumstances outside of U.S. control, like the Iranian attack last year on a Saudi Arabian oil field.

Democrats, for their part, have criticized Trump for gas prices. Senate Minority Leader Chuck Schumer of New York held a news conference in front of an Exxon gas pump near the Capitol in 2018 when prices rose after Trump announced he was pulling the United States out of the Iran nuclear deal. Republicans did the same thing to Obama.

But current events are raising the real prospect that gas prices might climb, observers say. Tensions are rising with Iran at the beginning of an election year, when politicians are increasingly sensitive to price hikes.

To be sure, the U.S. hydraulic fracturing boom has decreased American reliance on Middle Eastern oil. In 2018, the United States was the top oil and gas producer in the world, according to the U.S. Energy Information Administration. That was on Trump’s mind when he addressed the nation last week about his decision to kill Iranian General Qassem Soleimani.

"We are now the No. 1 producer of oil and natural gas anywhere in the world," Trump said. "We are independent, and we do not need Middle East oil."

So far, the killing and its aftermath have not had a major effect on gas prices. They rose briefly after the event before dropping after Trump’s public address Wednesday morning.

Trump has advanced energy policies that could blunt the effects of foreign oil shortages on the U.S. economy, said Nick Loris, an energy policy analyst at the Heritage Foundation. Those include expanded drilling on public lands and faster permitting.

However, it’s "disingenuous" for Trump to say such policies have resulted in lower gas prices, Loris said, because it will take years for those decisions to affect the price of oil. Yet he said there’s little risk when Trump, or any politician, takes credit for affordable gas.

"I don’t think it’s politically risky, because it’s one of those issues where you can take credit for it when it’s in your favor and ignore it when it’s not," Loris said.

The risk comes when prices skyrocket. Consumers will tolerate a reasonable amount of fluctuation in gas prices, but they have a limit, Loris said.

"The magic number is $4 per gallon," he added. "It’s when people really start to pay attention to prices at the pump and really start to take their frustrations out at elected officials."

On Friday, Trump imposed economic sanctions on Iran that could affect oil prices. In 2018 when Trump threatened similar sanctions on Iran, the price of oil shot up 13%. Last year, the administration threatened to zero out Iranian exports, causing barrel prices to hit a six-month high.

While the American economy may not be as vulnerable to restrictions on Middle Eastern oil, choking off energy supplies from the region could cause prices to jump, Bordoff said.

"If Iran were to take action to push gasoline prices higher or oil prices higher, that would not have the same harm to the U.S. economy, but it still would cause political harm because consumers at home still care a lot about gasoline prices," Bordoff said.

Bordoff sees irony in Trump’s policies. As the president obsesses over keeping gas costs low for American consumers, his energy programs help keep the country reliant on oil, Bordoff said. He noted that the administration is rolling back vehicle fuel efficiency standards and backing away from renewable energy.

"I think the fact that gasoline prices are still set by global oil prices is a reminder of why the best thing we can do to insulate the U.S. from global oil price shocks is to reduce the oil intensity of the economy in the first place, not roll back fuel economy standards," Bordoff said.