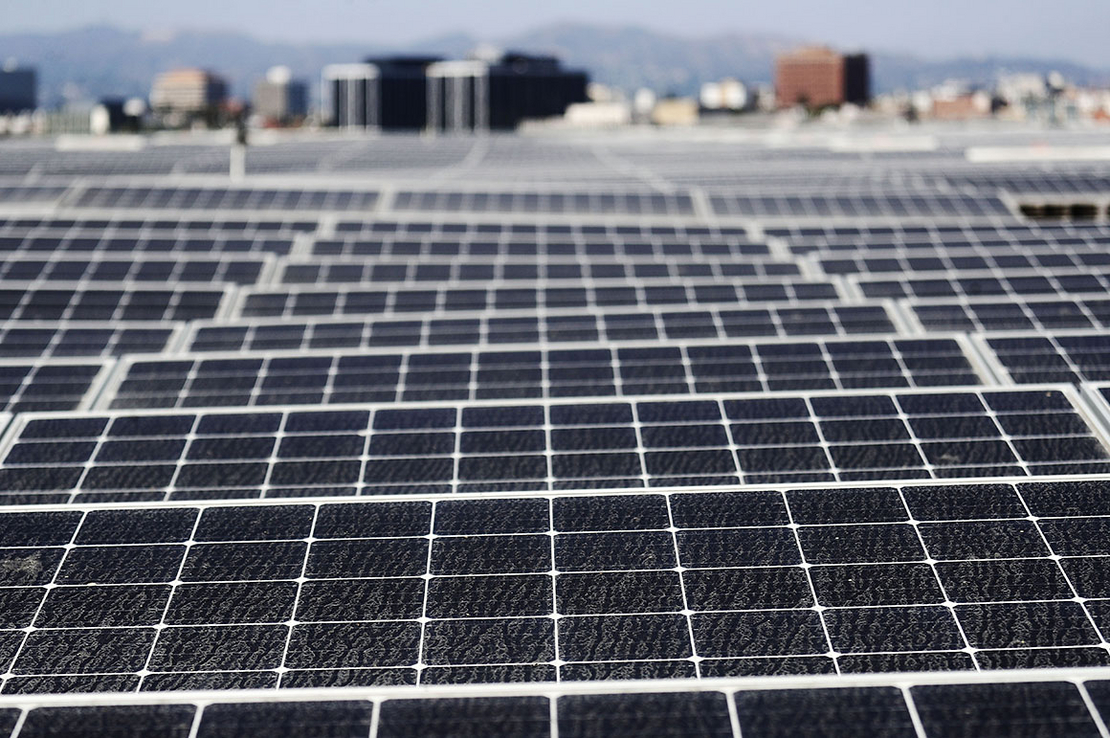 Solar panels are pictured atop the roof of the Los Angeles Convention Center in this file photo from 2018. Mario Tama/Getty Images

An aggressive Biden administration blueprint released yesterday aims to give solar an unprecedented role in reaching a carbon-free grid, but its feasibility may hinge on local and state action, Congress and trade policy shifts, according to researchers.

The Department of Energy analysis said getting to a carbon-free grid by 2035 would require solar to contribute 37 to 42 percent of all power, making it the largest carbon-free electricity resource. That share would tip upward to 45 percent in 2050, if the U.S. wants to decarbonize its entire energy system.

Annual additions of solar would need to double in the 2020s, from current levels, then double again in the 2030s, in order for those 100 percent carbon-free scenarios to pan out, according to the blueprint’s modeling.

Yet many of the building blocks will lie outside of the Biden administration’s reach, falling under the jurisdiction of state and city officials. Congress also has yet to approve major reforms that might juice solar deployment.

"It’s going to be a complicated game of getting everyone on board," said Jonas Nahm, assistant professor of energy, resources and the environment at the Johns Hopkins School of Advanced International Studies. "Without the states, it’s going to be very hard to meet these targets, because they’re the ones regulating and setting the targets for utilities."

The DOE blueprint emerges at a time of new challenges for solar’s growth.

The price of new solar projects, for instance, is likely to go up this year for the first time in a decade, thanks to the rising cost of metals and a ban on imports made with forced labor in China’s Xinjiang region, according to a recent report by Wood Mackenzie analysts (Energywire, Sept. 7).

Those trade policy issues, rooted in larger geopolitical disputes between the U.S. and China, show few signs of a rapid resolution. Some researchers point to homegrown problems for solar as well.

Within the United States, solar developers have encountered increasing trouble when building big installations in rural areas, with locals often working to stop projects that they see as an eyesore. Utilities have had trouble accommodating rapid growth in the number of new energy projects seeking to connect to the grid, delaying solar’s entry. Grid researchers also say the country needs to build out far more transmission to extend the reach of solar and other renewables.

Michelle Davis, a solar analyst for Wood Mackenzie, said both state and federal action would be "critical" to overcome those issues with local opposition, the grid and utility interconnections.

Solar developers, she noted, are "already running up against bottlenecks and challenges" in recent years, as demand for their projects grows. Solar constituted 3 percent of all power supplies in 2020, according to DOE.

Turning solar into the country’s biggest power resource, said Davis, would be "an incredible challenge for this industry.”

A ‘turning point’ for solar?

Davis also noted that supply of batteries — a key catalyst for solar’s growth since they make the electricity available for a longer portion of the day — has not kept up with global demand. Some battery analysts have predicted severe shortages for the raw minerals used in lithium-ion batteries, beginning in the mid-2020s (Energywire, April 19).

The DOE blueprint has an answer for those kinds of concerns: research and development, and demonstration of young technology.

Technological progress in solar and storage, like a 60 percent drop in the cost of photovoltaic electricity by 2030, could offset the rising costs of project build-out, according to the document. A 95 percent carbon-free electricity system could be achieved without increasing electricity prices, found DOE researchers.

The blueprint also suggests that solar developers could minimize conflicts with local opponents by focusing on sites that are already "disturbed" by development, like grazing and farming areas or artificial bodies of water, or contaminated lands that aren’t suitable for other purposes.

In 2050, ground-mounted solar panels would need less than 10 percent of the area provided by those "disturbed" or contaminated lands, DOE researchers said.

Rebecca Hernandez, an assistant professor of earth systems science at the University of California, Davis, who studies the ecological impacts of energy projects, said she was "heartened" by DOE’s emphasis on that kind of solar development.

According to her back-of-the-envelope calculations, she said, solar would have to sit on a surface area equivalent to the state of Maryland, in order to accommodate the amount of solar necessary in 2050 to reach net-zero emissions.

"That’s where siting becomes really, really important. We could do a lot of damage with that amount of land. We could bulldoze a lot of natural areas. A lot of pine ecosystems. A lot of desert scrubland. And a lot of New Jersey pine forest," said Hernandez.

"To date, there’s been a lot of vagueness about our intentions with solar, and whether it has potential" to underpin the United States’ energy systems, she added.

"I feel like this is really a turning point for us, in terms of our climate mitigation goals," Hernandez said.

The solar industry’s main trade group, and the Energy Department itself, staked the blueprint’s carbon-free scenarios on new policies, although they presented different ideas of what those would need to be.

Energy Secretary Jennifer Granholm pointed to the Senate’s bipartisan infrastructure package, along with President Biden’s wider agenda, as containing all of the necessary policies to fulfill the blueprint.

“Achieving this bright future requires a massive and equitable deployment of renewable energy and strong decarbonization policies — exactly what is laid out in the bipartisan Infrastructure Investment and Jobs Act and President Biden’s Build Back Better agenda," she said in a statement released with the DOE report.

The Solar Energy Industries Association, for its part, sent a letter to Biden and congressional leaders yesterday, urging them to take up ideas left out of the Senate’s infrastructure package.

A massive $3.5 trillion, 10-year reconciliation bill is expected to include an extension of solar tax credits as well as what the Senate said is a Clean Energy Technology Accelerator to fund low-income solar and other climate-friendly technologies.

Solar could also be boosted by the bill’s expected clean electricity payment program — a measure similar to clean electricity standards that have been employed at the state level in which utilities would be paid for increasing the use of clean energy such as solar.

Solar boosters are asking Congress to extend solar tax credits for 10 years, to allow solar owners to be paid directly instead of having a tax credit and to improve a program that provides funding to allow agricultural and rural electric cooperatives to be eligible for solar project grants.

House Democrats are also pressing to include a measure to allow solar companies to qualify for the full value of the production tax credit, which currently is limited to wind and geothermal energy projects.

House and Senate committees are expected to hammer out the details in the coming weeks, but the reconciliation measure faces a steep hill in the Senate where Democrats can’t afford to lose a single vote.

"We’re moving full speed ahead," Schumer said yesterday. "We want to keep going forward. We think getting this done is so important for the American people."