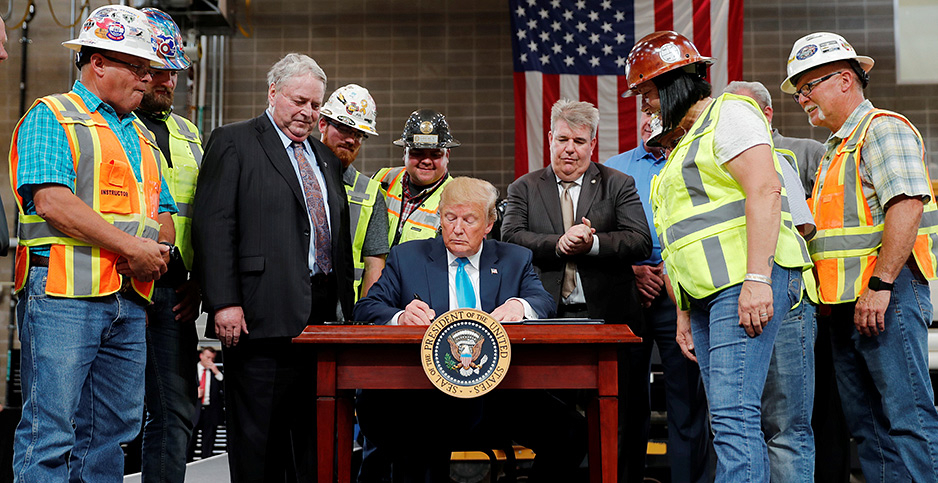 President Trump signs an executive order on energy and infrastructure during a campaign event at the International Union of Operating Engineers International Training and Education Center in Crosby, Texas, last year. Carlos Barria/Reuters/Newscom

Candidate Donald Trump in 2016 promised that he’d end the "war on American energy." As president, Trump has boasted that in three short years the U.S. has achieved "energy dominance."

But with the oil crash and a global pandemic crushing energy demand, the prospect that record-setting U.S. oil production will continue through the end of Trump’s first term is in serious doubt, according to analysts.

Trump’s comments about America’s energy dominance goes back to 2018, when the United States became the world’s largest crude producer. But Saudi Arabia could upset U.S. producers’ dominance by flooding the market with cheap oil. The kingdom is pumping more oil in a game of chicken with Russia, as both sides grapple for market share.

Experts say both political parties will try to use the energy crisis to their advantage, and while things have changed, the president may not lose his loyalists over oil. Meanwhile, the upset proves a new challenge for the left, where voters may not want more upheaval during a period of economic stress.

Terry Madonna, director of the Franklin & Marshall College Poll in Pennsylvania, said he expected Trump to maintain his insistence on "energy dominance" even if the U.S. is not a world leader.

Trump’s chief political appointees have so far projected optimism and confidence about energy in the face of the crisis.

Energy Secretary Dan Brouillette brushed off a question yesterday with Platts about whether the prospect of a massive economic slowdown undercuts the Trump administration’s rhetoric around energy dominance.

"I think we are stronger than we ever have been," Brouillette said, suggesting that what is happening is not entirely unprecedented. He pointed to the rise of shale drilling in Oklahoma and Texas a decade ago, at the start of the 2008 financial crisis.

"It’s really the demand side of this equation that we have to figure out," he said.

The Department of Energy and the Trump campaign did not respond to requests for comment.

The administration has also downplayed the connection between the coronavirus crisis and what’s happening in the oil markets.

"The oil market has nothing to do with the coronavirus other than there’s just a lot less demand at this point," Treasury Secretary Steven Mnuchin said yesterday when asked what the administration anticipated in terms of oil industry bankruptcies.

But experts say the novel coronavirus has led to a demand crisis unparalleled in the industry’s history, as the U.S. economy and growth in Europe and Asia come to a screeching halt. Oil prices are at a 17-year low, despite a bid by the Trump administration to spend $3 billion buying oil for the country’s Strategic Petroleum Reserve.

Rystad Energy senior oil markets analyst Paola Rodríguez-Masiu said in a note that government actions appeared to be "insufficient to keep demand from falling sharply" and predicted prices would have to fall low as $10 a barrel to force shutdowns of production and alleviate the oversupply.

A continued downward trajectory could spell trouble for a great number of U.S. oil producers — the shale drillers that are to thank for record oil and gas production undergirding the energy dominance narrative, but whose balance sheets can’t handle a prolonged price war and demand crisis.

"You are going to see the unemployment levels among oil and gas workers skyrocket," said Rick Ridder, a political campaign consultant and president of RBI Strategies and Research.

That likelihood is bad news for some Trump voters, and for the president, Ridder said, denying the uniqueness of Trump’s prowess or his base’s loyalty compared to historic norms.

The challenge in November will be for the Democratic contender to prove that they are the vision of the future. The oil upset could drive further swell uncertainty about the oil and gas industry and about its long-term viability, Ridder said.

Still, many voters in energy-rich states are unlikely to blame Trump for any slump in the industry, pollsters said.

"They know he is friendlier to energy issues than the Democrats are," said Republican pollster Glen Bolger. "It’s not like having the Democrats in charge of energy policy is going to be better for those states."

Many Republicans say they can successfully peg policies like the Green New Deal to higher energy costs in battleground states, despite arguments from the left that addressing climate change will save money.

"If you go into the voting booth and you’re pulling levers, you’re not doing it on climate change, you’re doing it on jobs, the economy, health care and terrorism, education, a lot of other issues," former Trump energy adviser Mike Catanzaro said on a University of Chicago podcast this week. "But people do pull the lever if they feel like they’re going to be paying more for energy."

Madonna said in swing states like Pennsylvania, which Trump won narrowly, former Vice President Joe Biden’s call for a ban on new hydraulic fracturing on federal lands could be a larger issue. The battleground state is also a major player in fracking and although opinions on the subject are sharply divided in the state, Madonna said "it’s my hunch that the Trump campaign is certainly going to use it, perhaps selectively in a few key states."

Yet Madonna also said it’s more likely the state of the economy will overshadow any other issue.

"Incumbents seeking reelection, if they faced a down economy, it’s been lethal," he said.

What this time period of uncertainty will do is send voters toward politicians that provide a sense of calm and stability, said Floyd Ciruli, a pollster based in Denver, noting that even Trump has reined in his more bombastic messaging and struggled to stick to the teleprompter.

What the energy dominance shocks has mostly done is deliver a blow to the campaign of Vermont Sen. Bernie Sanders, he said.

"For those people that wish to disrupt things, the disrupters, the people that want to stop fracking and take on oil, this is not a good moment for them," he said. The Biden and Sanders campaigns did not respond to requests for comment.

Activist groups are watching the oil bust closely, aware of an opportunity to highlight oil’s economic volatility and drive attention to climate action while oil’s volatility and economic risk is front and center.

"Perhaps ironically, it’s the real-world results of the Trump administration’s radical, utterly unreasonable approach to energy policy and denial of any responsibility to take climate action that’s making the best possible case for phasing out oil and gas production on our public lands and putting in place a Green New Deal," said Erik Schlenker-Goodrich, executive director of the Western Environmental Law Center.

Goodrich said this time period represents an opportunity to phase out oil and gas development, particular on federal lands — where Trump’s energy dominance agenda has largely paid out.

Others also note that the oil price bust has arrived at a moment of transition for the industry, with some investors backing off their support for fossil fuels — though this has largely been about coal rather than oil and gas until recently, said Marianne Kah, of the Columbia University Center on Global Energy Policy and formerly a chief economist at ConocoPhillips.

"It’s still really the early stages," she said of investor sensitivity to the environmental and climate impacts of the oil business.

The oil price bust has been sudden and created a "distraction" on environmental sustainability discussion that’s been swelling in the oil and gas sector. How the industry behaves on the other side of the pandemic and the price war affects the industry.

‘Hang on for the ride’

A fossil fuel sector struggling despite Trump’s support wouldn’t be novel. The president has been just as supportive of the coal industry as the oil and gas sector, if not more.

But as the market pummeled coal, Trump’s appeal in coal country held. Attempts to buoy the industry, like a bid by former DOE Secretary Rick Perry for the federal government to buy coal power from struggling plants, were appreciated by many of his supporters, even if they didn’t save coal (Energywire, Aug. 19, 2019).

"U.S. shale has a position that isn’t going to go away," Kah said. "The resource is very good, and it will come back. I’m not worried about shale going away."

Phil Flynn of PRICE Futures Group said industry always rebounds stronger than it was. The present pain will shake up the sector and there is risk that a number of companies will go under. But it won’t last, he said.

In a call with E&E News before appearing on Fox News, Flynn said the last time the Saudis tried to flood the market and push out shale, in the price shock five years ago, the U.S. industry got leaner and more efficient.

Earlier in the day Brouillette echoed that confidence.